Oppo's flagship smartphone, the N1, has good features but is a costly buy. 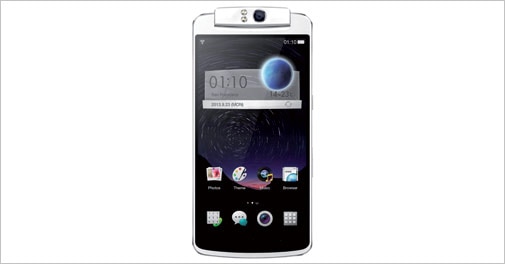 Chinese smartphone players are aggressively eyeing the Indian market. The latest to do so is Oppo, with its flagship smartphone, the N1. This phablet comes with a price tag or Rs 39,999. The Oppo N1 has a 5.9inch display embedded in a white body.

On top is the 13 MP camera, which can be rotated up to 206 degrees. There isn't any front facing camera as the rear one can be used to capture good quality selfies. The images captured had good colour reproduction. There is a dual LED flash for low light imaging. However, there is a distinct shutter lag. Below the display are the three touch keys. The back has a touch panel that comes in handy while capturing images. I also received a small, circular accessory with the phone which can be used as a remote to capture images from a distance. It comes pre-installed with the app that helps in pairing the accessory over Bluetooth.

Running Android 4.2.2, it comes loaded with the Color OS by default. The user interface has circular icons. The Oppo N1 is powered by a 1.7Ghz quad core Snapdragon processor with 2GB of RAM. It scored well on synthetic benchmarks. I could easily play games on it and switch between the running apps.

Overall, the Oppo N1 seems to be a good effort at a completely wrong price. At this price, I would rather buy a Sony, Samsung, Nokia or even an Apple flagship. For one, I know the hardware will be good and in case any issue crops up I know where to take it for repair.

BAG IT OR JUNK IT:
A costly phablet, but has good features.