The Satyam scandal does no favours for the IT services sector and for overall investor sentiment.

Already under pressure from the global slowdown, wary foreign investors, terror attacks and a slowing domestic economy, the stock markets could have done without the Satyam scandal. In a single stroke, Raju and company spooked the whiff of a bear market rally that was expected to take the Sensex to 12,000 levels by March 2009. Just a day before Raju’s dreadful admissions, the benchmark Sensex had touched an intermediate high of 10,335—a level not seen since November 10, 2008. Analysts were even expecting December’s minor rally to extend into January on the back of rising insurance premiums and selective domestic buying, but Raju’s fraud dashed all hopes. 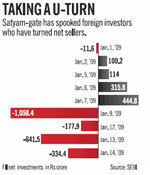 Click here to Enlarge
The situation may well see the markets meandering for a long time. Says Vetri Subramaniam, Head (Equity Assets), Religare Asset Management: “It obviously puts pressure on the downside and it damages investor sentiment. But we should distinguish between corporate governance and fraud. Satyam falls in the latter category of fraud and they happen everywhere.”

The outsourcing business relies heavily on a quick and continuous support and very often overnight solutions to clients’ problems. Getting Satyam to focus on its clients while it tries to ascertain the veracity of its accounts is another test. To retain clients, Satyam might have to look for suitors, who will buy its entire business, but the contingent liabilities on account of the lawsuits are a dampener.

But a bigger fear is whether the after-effects of Satyam-gate will rub off on the fortunes of the IT industry. While Satyam will find it difficult to gain new customers and retain old ones, top Tier IT companies like Infosys, Wipro and HCL are not going to see any negative fallout or cancelled deals. Analysts point out that the Satyam scandal was purely accounting in nature and had nothing to do with the high-quality standards of IT companies. Many of its clients had expressed pleasure over the way Satyam managed their tech requirements, which included some top-of-the-league Fortune 500 companies. Tech outsourcers have complicated IT requirements, which they are reluctant to move after they have built confidence with their technology providers.

Keeping client confidentiality and trade secrets are paramount in the business of tech outsourcing, and Indian companies have maintained high levels of secrecy. Besides, taking the IT business to other countries means additional training costs and extra outlays for the outsourcers. Says Manish Chokani, Director, Enam Securities: “Outsourcers like continuity and quality from IT companies.”
TweetYoutube

'More satyams will continue to happen'