A sense of 'retro' is omnipresent in Enfield's product portfolio. The Bullet, the Classic and even the Thunderbird ooze old-school charm
Rahul Ghosh | Print Edition: Jan 19, 2014 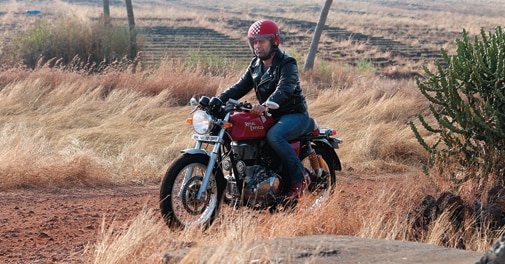 The new big thing in the motorcycle market today is, well, old. Take a look at what many manufacturers worldwide are doing. Japanese giant Yamaha recently unveiled the Bolt, an iteration of a modern-day Cafe Racer. Kawasaki has reinvented retro in the form of the Estrella. And in India, Royal Enfield thinks sticking to its roots is the right way forward.

A sense of 'retro' is omnipresent in Enfield's product portfolio. The company decided to stick to the retro theme in the early 1990s. The Bullet, the Classic and even the Thunderbird ooze old-school charm. The fact that people are waiting months to get deliveries of their Enfield bikes confirms that the charm is working. To cope with rising demand, Royal Enfield recently commissioned its second plant with an initial investment of Rs 150 crore.

It comes as no surprise then that Royal Enfield has chosen to tread the retro path again with the new Continental GT . A Cafe Racer is a motorcycle modified to suit high-speed racing from cafe to cafe in the UK in a fairly unorganised manner. The term developed in the 1960s and is still in vogue. Royal Enfield built a prototype of a Cafe Racer and displayed it at the 2010 Auto Expo in New Delhi. The response at the fair gave it the confidence to go for mass production of its Cafe Racer.

Many might wonder why anyone should go back in history to create a new bike. Siddhartha Lal, Managing Director and CEO of Eicher Motors, which owns Royal Enfield, says: "We had tried many other bikes in the past which were not 'retro', but they were axed. It is not to say that every single bike in the future will have their roots in the past. We certainly want to be inspired by the past but not dictated by it. So there will be bikes from Royal Enfield which are not past-driven."

The Continental GT is one of the most beautiful designs from Royal Enfield. A Cafe Racer has a predetermined design formula and Royal Enfield chose to keep it simple and straight. The task of building the chassis was passed on to UK-based Harris Engineering. A chassis is a more functional element of the motorcycle. It is the skeleton that determines how the bike handles and performs. In this particular case, it also had to be good looking. But being beautiful is never enough. So the frame was modified to offer a good ride quality and handling. UK-based Xenophya Designs was chosen for the design work, with Mark Wells at the helm. Wells had help from Royal Enfield's S. Sivakumar. The philosophy was simple. Wells says the bike had to have a "classic feel to it but with a modern touch".

The philosophy becomes clear when you look at the bike in profile. The long tank base flowing into the single 'wasp style' seat pan on top of the chassis is classic Cafe Racer design. The fuel tank, in spite of being quite large in dimensions, can only store 13 litres of petrol. This is to ensure that designers can feed in recesses which allow the rider to grip the tank better. It also looks smart that way. The seat flows into the 'bumstop', which is again a classic design element. Adding to the design was the 'Monza style' fuel cap on the tank and the two-pod instrument panel that resembles Smith's gauges seen in the British bikes of the past.

The modern touch to the instruments comes in the form of an electronic module and a digital fuel gauge and trip computer. The other big element that fuses the past with the present is the wheels: aluminium alloy, but, instead of the conventional two- or three-spoke design, they retain the old-school set up.

Classic Cafe Racer design includes a certain charm about the way the rider sits on the bike. A set of adjustable clip-on bars are there to aid that. The designers also had the option of mounting the handle bar below the yoke, which is the old-school way. But they did not; the riding position would have become too extreme.

To satisfy the purists, who would never be content with just the design, the standard 500-cubic-centimeter unit construction engine was chosen for the job, but it was bored out to displace 535cc. It offers a bit more power at 29.1bhp and a respectable 44Nm of torque.

The Continental GT is the company's new flagship. It is also splendid value for money at Rs 2.05 lakh on road. The response to the Cafe Racer has been positive so far, but the company is not resting on its laurels. "We are looking at a lot of aftermarket accessories," says Lal.