The year gone by had it all—emotion, drama, action, and a bit of tragedy too, says T.V. Mahalingam who had a good seat in the house. 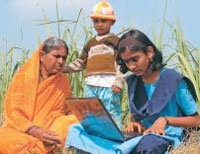 India Inc went global in 2007
Among my favourite scenes in the greatest Hindi movie of all time, Sholay, is the sequence when a plastered-to-the-gills Veeru threatens to jump off a water tank and commit sooside.

It’s then that he utters my favourite line in the movie—“Is story mein emotion hai, drama hai, tragedy hai” (“This story has emotion, drama and action”). Basically, that’s my idea of a complete entertainer.

As a ringside spectator of Indian Business, I think the year 2007 was something like that. But first, the action bit. Chinese astrology terms 2007 as the “year of the pig”—a year of fertility and virility, and an auspicious one for having kids. India Inc. perhaps believes in Chinese astrology for it showed a rapacious appetite when it comes to acquisitions. When Tata Steel bid for Corus in late 2006, every publication worth its weight in newsprint splashed the good news on their respective covers, front pages, editorials, etc. (the deal was concluded early in 2007.)

In 2007, India Inc. went global, rural, local and very vocal. Corporate India started hotels, retail stores, mobile outlets and computer kiosks in the farthest corners of the country. Big Bazaars and Godrej Aadhars sprouted in places like Satara and Sangli, which were earlier known more for their scenic beauty and succulent fruits. These were places that a business reporter had no business being in.

But with retailers going there, could scribes like yours truly be far behind? The discovery of “Bharat”, for Indian businesses and business reporters, began in a big way in 2007. The catchphrase of the year for 2007, however, has to be the much-done-to-death “bottom of the pyramid,” with a slightly more progressive connotation. From being a politically correct phrase that stood for the unwashed masses that purchased nothing but glucose biscuit packets (and that, too, on credit), and did not have the fabled “purchasing power”, they are today the marketers’ new-found mojo.

Now for the drama and tragedy bit. India’s first low-cost airline, Air Deccan, along with most of the airline industry, bled red. Acquisitions followed. Jet kissed and made up with Sahara and then gave birth to JetLite. Kingfisher nibbled on Deccan, Mallya and Gopinath exchanged barbs, hugged each other and Deccan was sold. While that’s a great thing for the industry, passengers may have to cough up more in future. Auto companies TVS and Bajaj Auto locked horns on a patent and are still indulging in some legal shadow-boxing.

Perhaps seeing all this action, even Bollywood clued into Indian business. Guru, perhaps the first Hindi major movie to feature a businessman as a hero, hit the screens in early 2007. The only thing missing in 2007 was a good old-fashioned stocks scam. Hopefully, we won’t have one in 2008.

Never too old to rock'n'roll

Good game, but no goal