After its return to power with a thumping majority, the first major task of the Narendra Modi government was to fulfil the ruling BJP's poll promise to make the PM-KISAN (Pradhan Mantri Kisan Samman Nidhi) plan more inclusive. It initially provided annual income support of Rs 6,000 to 12.5 crore small and marginal farmers who own up to two hectares of land but was extended to all farmers irrespective of the size of their landholding. Consequently, two crore beneficiaries were added after the Cabinet, in its first meeting, approved an extra outgo of Rs 12,000 crore in addition to Rs 75,000 crore already allocated for the purpose.

Curiously, the additional outlay was missing from the Union Budget 2019/20, taking the sheen out of an otherwise impressive spike in agriculture budget that almost doubled from Rs 67,800 crore in 2018/19 to Rs 1,30,485 crore in the current financial year. The huge outgo towards PM-KISAN has also impacted budgetary allocations for other programmes of the agricultural ministry, including funds for a minimum price support scheme for agri produce.

"Farmers hoped that the annual income support would be increased or at least extended to landless farmers who cultivate on contract/lease. But Finance Minister Nirmala Sitharaman only retained the provision of Rs 75,000 crore. This is very surprising as the government has increased the number of beneficiaries," says Avik Saha, National Convenor of Jai Kisan Andolan, a nation-wide campaign.

Leaders of the All India Kisan Sabha (AIKS) are more sceptical. Terming the Budget as an empty rhetoric, Hannan Mollah, General Secretary of AIKS, says it does not address the issue of remunerative pricing or suggests measures to get rid of agricultural debt. "A major cause of the agricultural crisis is the huge rise in input prices. Seeds, fertilisers, diesel and electricity cost a lot more as a result of price decontrolling in those areas and the imposition of GST. The government should have restored price regulation and brought input costs under control." Mollah also criticises the allocation shrink for the job guarantee scheme MGNREGA as the drought situation in many parts of the country is likely to hit farm jobs. 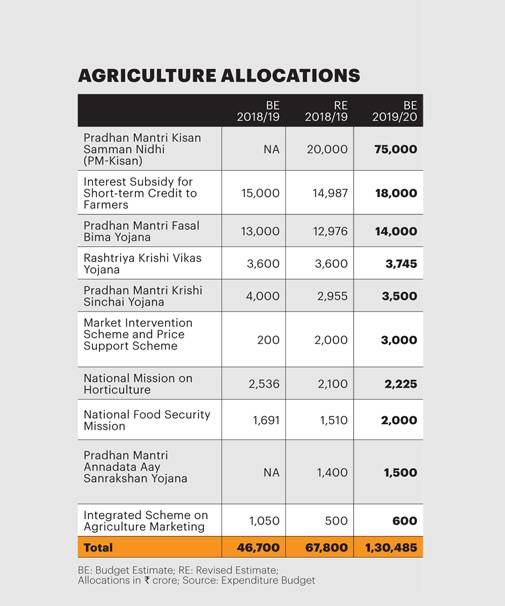 Sitharaman's call for "zero budget farming" without the use of fertilisers and other essentials does not find many takers, though. So, let us look at the numbers first. The subsidy provided for the fertiliser sector - Rs 79,996 crore for 2019/20 (BE) - is higher by Rs 9,910 crore compared to what it was in 2018/19 (RE).

"The subsidy allocation for indigenous urea has been hiked. As for phosphatic and potassic fertilisers, subsidy allocation for domestic production has been mostly kept unchanged. Overall, there could be a shortfall of around Rs 25,000 crore, which is a marginal reduction from the carry-forward amount from 2018/19," says K. Ravichandran, Senior VP-Group Head, Corporate Sector Ratings, ICRA. According to him, under-budgeting of subsidy will weaken the liquidity profile of the fertiliser industry with spikes in short-term borrowings in the second half of the year, and higher interest costs on the same. "Several government programmes and higher agricultural credit initiated to revive the agricultural economy will help fertilisers companies in the medium term due to higher demand."

D. Narain, Managing Director and CEO of Bayer Crop Science, says that the proposed measures around farming will give an impetus to the agriculture industry by plugging gaps in capital subsidies and structural support. "The push for creating an enabling environment through 80 livelihood incubators and 20 tech incubators will not only encourage a new breed of agri entrepreneurs but will also bring in high-end technology in farming. Plans to invest further in agri infrastructure will make Indian agriculture more competitive globally."

The need to focus on technology is also emphasised by Manoj K. Sharma, Director of Delhi-based MicroSave Consulting that studies the impact of direct benefit transfers across social sector programmes. "The government's much-hyped mega electronic National Agriculture Markets (eNAM) scheme has to turn functional now. The Prime Minister personally promised to farmers that the eNAM initiative would come through. Both NITI Aayog and the Ministry of Agriculture will have to revisit the eNAM structure to make it useful for traders, and transparent and remunerative for farmers. Well-functioning markets can address farm distress and double farmer income," he suggests.