Sixty-year-old Ashraf Bhai swears by Vi-John shaving cream, which he has used in his wayside barber shop in Ranchi for over three decades, because it is good value for money. He is unaware that Bollywood star Shah Rukh Khan, one of the country's most expensive brand ambassadors, endorses the product. And Khan, for his part, has reportedly said he was surprised to learn that the shaving cream brand he had signed up to promote was the largest-selling in India.

Click here to Enlarge
Vi-John is a good example of low-profile Indian brands that have stood their ground against multinational onslaught. The Rs 500-crore Vi-John Group also has interests in real estate and liquor, but is best known for its fast-moving consumer goods (FMCG).

In the Rs 350-crore male grooming market, sophisticated brands such as Gillette and Axe may be more visible, but in the basic category of shaving creams, Vi-John sells more than twice as many units as Gillette, according to Nielsen India data shared by an industry source.

The success of its shaving and hair removal creams has spurred Vi-John to take on multinational brands. "Our products are popular, so why should they lose out on image," asks 39-year-old Harshit Kochar, a thirdgeneration entrepreneur and Director.

Small-town Warriors
Underpinning such gumption is, of course, the fascinating story of the resurgence of regional brands. Things are getting hotter in the Rs 1.3 trillion (a trillion is 100,000 crore) FMCG industry, which accounts for 2.2 per cent of the country's GDP.

According to a report by Booz & Company, the industry is expected to record at least 12 per cent growth annually and reach Rs 4 trillion by 2020. Business Today presents a selection of small, regional brands that have been around for years, and are drawing up aggressive plans that should have the big names in the business worried.

"We do not want to give an inch to any of our competitors, and I constantly track all brands and development in my space," says Chander Mohan Sethi, Chairman and Managing Director, Reckitt Benckiser.

His company retained over-thecounter brands such as Moov, DermiCool and D'Cold, but sold personal care brands such as Livon, Set Wet and Zatak this year to Marico for a reported Rs 450 crore. For Marico, this transaction was the tenth such acquisition.

The Booz report says FMCG players in India need to become more 'regional' in their thinking, and operate in a more decentralised manner.

"Given the large population, consumers within a state provide...sufficient scale to form dedicated organisations for individual regions or states," the report says.

By 2020, the report says, Maharashtra's GDP will exceed that of Greece, Belgium, and Switzerland, and Uttar Pradesh will have a bigger economy than Singapore or Denmark. So a dedicated firm for just Maharashtra or Gujarat could be realistic and profitable. 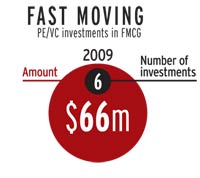 Click here to Enlarge
The report notes that Hindustan Unilever Ltd (HUL) launched Brooke Bond Sehatmand for low-income consumers, to compete with regional tea brands such as Wagh Bakri, Girnar and Sapat. Sehatmand was specifically meant for down-trading consumers - those who shift to less expensive brands based on economic considerations - in Bihar, Chhattisgarh, Jharkhand, Madhya Pradesh and Uttar Pradesh.

HUL also launched Ruby, a tea brand specifically for the Karnataka market. It also has region-specific soap brands. The brands featured in the following pages were chosen for their strong regional bias. Wagh Bakri, which has a share of almost 50 per cent of the Gujarat market, and around seven per cent of the Indian market for branded tea, is steadily becoming a national brand, as it already has a presence in more than seven states.

"We never want to forget that we have regional strengths," says Parag Desai, Executive Director of Gujarat Tea Processors & Packers, which owns the brand. A third-generation businessman, he handles marketing and sales.

Also on our list of tenacious brands are Sosyo, a soft drink brand, and Havmor ice cream, both popular in Gujarat, Mapro fruit products from Maharashtra, soft drink maker Kalimark and Sakthi Masala from Tamil Nadu, Himgange herbal products from Uttarakhand, and K.P. Namboodiri's oral care and other products from Kerala (www.businesstoday.in/namboodiri).

Breaking the Mould
It is a common perception that regional brands are a matter of low price and graffitistyle advertising. "This is the biggest fallacy. Today, multinational companies have the ability to match and compete on any parameter," says Desai of Wagh Bakri.

"A gutkha player from the hinterland badgered us for months to make an ad," he says. The businessman was not interested in any other service; all he wanted was a television commercial. "He even agreed to pay part of the money in advance, and took us to the car park and offered us Rs 25 lakh in cash, which we declined."

The story does not end there. When the team made a pitch, the client almost seemed to egg the agency on to splurge. "He told us that we could fly our entire office to the US, and that even a Rs 3 crore budget was acceptable," says Dasgupta. He says that after assuring the agency that money was not an issue, the businessman added, "If I do not like the work…", and lifted his gun in a threatening manner. 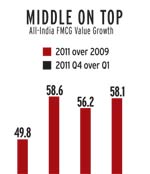 Click here to Enlarge
The agency did not take up the assignment. Such stories are not common, but they do reflect how stark cultural differences can be. Dasgupta is quick to add that most regional clients are pretty savvy.

"I have learnt some insightful things from Paras Pharma co-founder Darshan Patel," he says. "Patel bhai would insist on watching ads on an average TV set, and also on a black-and-white one - unlike big clients who want the biggest screen and the best sound equipment." His approach was effective, Dasgupta says, as it tuned into the way many Indians watch television.

Besides letting the target consumer's lifestyle guide their strategy, many regional brands focus on their unique strengths. Cold drink maker Kalimark whose Bovonto brand commands remarkable loyalty in Tamil Nadu, has held on to its price, and actually sold at a premium to Pepsi and Coke, even at the height of price wars.

Mapro, a fruit product manufacturer is another example. Based in Panchgani, a strawberry-growing hill station in Maharashtra, it has developed a radically different product from bigger rivals in the confectionery segment, and plans to expand operations beyond western India.

In Gujarat, regional beverage brand Sosyo too is looking to expand, and not just in the domestic market. It is also eyeing the UK and US markets. Regional brands do not operate in a parallel universe; they have much in common with high-profile national rivals. "They use the same distribution channels as national players," says Pradeep Kashyap, Founder of MART, a company that specialises in rural and small-town marketing. "The difference is in their ability to service and fill a local need more effectively."

According to MART's research, growth in small towns is exponential. "But my observation is that people in smaller towns seek value," adds Kashyap. "They are not blinded by mere advertising by any company, and do not necessarily fancy 'big' brands."

Like big brands, small ones too need to work to cultivate a market. Sakthi Masala (www.businesstoday.in/sakthimasala), based in a small town near Erode, Tamil Nadu, worked hard to change local consumption habits with its branded and packaged spices.

It has pushed its brand aggressively outside its home territory by underscoring the taste of its products, which are often sought by South Indian consumers not only in their native region but even in other countries.

And if the rise of modern retail helps big brands, it does a lot for small ones, too. It enables regional brands reach their target audience in various regions without investing in large distribution channels. "As consumers move and settle across the country, we are able to help small and regional brands get a national footprint and reach pockets with products that are relevant to communities," says Devendra Chawla, President (Food Bazaar Category), Future Group.

Consuming need
Increasingly, small and regional brands are driven by an increasing need for scale and consolidation. G. K. Burman Herbal, based in Haridwar, Uttarakhand, which manufactures Himgange ayurvedic hair oil, is looking to acquire other companies that will let it scale up rapidly.

The precedent set by the $3.5 million investment in 1999 by Baring Private Equity Partners India in Jyothy Laboratories continues to inspire companies to scout for potential.

Although Baring exited Jyothy Labs two years later, selling its stake for twice as much, Jyothy grew from a regional brand into a huge opportunity for investors, and eventually turned acquirer when it bought a 71.6 per cent stake last year in Henkel India - the Indian arm of Germany's Henkel AG - for a reported Rs 570 crore.

This year has already seen two private equity deals. Former Baring India partner Subbu Subramaniam, who had led the Jyothy investment, and who recently set up MCap Fund Advisors, a private equity fund, himself bought a two per cent stake in Jyothy in a secondary market transaction.

Investors seek inherently strong brands. "This is where the intangible value of the asset lies," says Subramaniam. He cites the example of Amrutanjan Health Care, which has a strong brand and has stayed relevant by making packaging innovations and invested little in advertising.

Big companies and investors like brands with the potential to gain acceptance in another region.

"Food may be too specific to the preference in a certain region, but there could be exceptions," says Subramaniam. Ahmedabad-based Havmor Ice Cream (www. businesstoday.in/havmor) is betting that it is one, as it seeks new markets outside Gujarat.

"Inorganic expansion is a key pillar of growth for us," says P.D. Narang, Group Director, Dabur India Ltd. "With acquisitions like Balsara and Fem, we have perhaps demonstrated more than any other company our ability to make profitable acquisitions and more importantly to manage them well."

However, investment banker Vishal Kampani, Chairman and Managing Director, JM Financial Investment, sounds a note of caution. "The challenge is to find brands that offer scale," he says. "A turnover of Rs 300 crore to Rs 450 crore has value." He says tiny brands have become ambitious, given the acquisition trend, and seek high valuations while offering little in terms of brand or scale.

But that does not prevent companies from sifting hopefully through the heap. Krishna Mohan, CEO -Sales, Emami Ltd, says there are as many examples of regional brands which are doing well as of those that are not. "Some have perfectly cracked the code of a particular region and can offer a product of choice, and have managed to stay relevant," he says. "But they have not ventured out." There are others, he adds, which have caved in because of a resource crunch, and are unable to combat competition.

Even within this set, there are brands with tremendous scope that can be revived with marketing and distribution support.

"From our perspective, we would evaluate the options, if they are available, provided they are in categories relevant to our organisational plans," adds Mohan.

How Vi-John has an edge over competitors