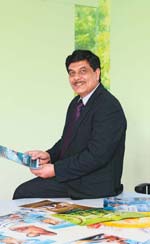 The top brass was in a lather: Do people bathe less in a downturn? There was no research to indicate this, but people were sure as hell using less soap, or at least Godrej No. 1 and Cinthol, towards the end of 2008.

And that was bad news, as GCPL gets half its turnover from soaps. Forget squeezing margins—prices of inputs like palmolein derivatives had shot up. GCPL was a sitting duck and profit after tax dropped by 6 per cent in the third quarter of 2008-09, compared with Q3 of the previous year.

But, while resources to fight back were limited, ideas were not. As it entered the new fiscal, GCPL decided to focus on a few key brands—Godrej No. 1, Cinthol and Godrej Expert—in soaps and hair colours and improve market share.

Says Dalip Sehgal, Managing Director, GCPL: “We felt… it made sense to focus on a few brands to gain market share.”

Strategy: Double advertising and promotional spends (Get Hrithik Roshan), launch variants. Why not expand the deodorant range to help people ward off the smell of fear and failure as the recession took more jobs?

Says Sehgal: “Despite the poor monsoon, various government initiatives like NREGA and the thrust on rural infrastructure will ensure that the rural market will continue to grow for us.”

Anand Shah of Angel Broking says: “Its expanding footprint in rural India would mean that it will cut into the share of rivals like HUL.”

As for the sharp improvement in market cap rankings, Sehgal says: ‘This is a reflection of investor confidence…. Our revenues and profits have grown consistently and at a good pace even when the environment has been difficult.”

Sehgal says GCPL tracks EVA or economic value added “rigorously”. “Our business has consistently been EVA positive. These factors have contributed to better recognition from the capital markets,” he says.

GCPL is also bent on capturing the lower price points: Its major brands are available in Rs 5 packs now, and this size already accounts for one-fifth of revenues. “We believe we have the right price points to gain market share,” says Sehgal. This is one of the main reasons, the company says, why it has not cut prices of its products this year when its competitors, including HUL, were doing it.

The picture today: The soaps business has grown over 25 per cent this fiscal, sales are up 22 per cent and profit after tax 78 per cent (helped by a steep correction in input prices).

“We are the second-largest soap player in the country with three strong brands—Godrej No. 1, Cinthol and Fairglow,” says Sehgal, asserting that Godrej No. 1 is now a Rs 500-crore brand and a leader by value and volume in north India.

It now has a 10 per cent share of the Rs 7,000-crore soap product market. In the Rs 800-crore hair colours market, which is growing at 20 per cent a year, it has increased its share. Also, it has been a consistent market leader in hair colours. Following the recent acquisition of a 49 per cent stake in Godrej Sara Lee Ltd, GCPL has added Good Knight, Jet, Hit, AmbiPur and Kiwi to its portfolio.

“Our philosophy has been to win brand loyalty during hard times. We have built relationships and we are confident that they will stay on with us during the good times as well,” Sehgal says. “Brands have a strong emotional connect, which are built over a period of time. The economic recovery would give a fillip to modern trade in urban centres, which would help us grow even faster.”

And oh, if you meet any GCPL folks, check out the smiles on their faces. Behind the smile is an 82 per cent increase in staff costs in the first quarter of the current year, compared with the last quarter of 2008-09. They got a performance-linked bonus: A component of the compensation structure is variable and linked to business performance.