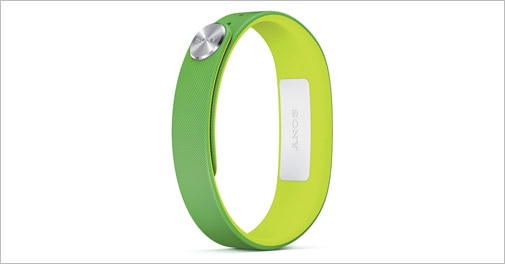 Announced at the CES earlier this year, the Smart Band SRW 10 has been launched fairly quickly in India. And that too at the right price. But how smart is it? And is it worth buying? Priced at Rs 5,990 it does a lot more than just track the user's fitness regime.

Add-on features includes sleep monitoring, wake up alarm, notifications, activity log, etc. The Smart Band has a small sensor, referred to as the 'core', that fits into the band. Sony has added two black bands - the smaller one for women, the bigger for men.

The only hardware key on the sensor powers on the band. There isn't any display to check whether it is turned on, - a long vibration does the job. To pair it with the Sony Xperia Z2, I had to install LifeLog and update Sony Smart Connect. Smart Connect gives access to all the basic settings while Lifelog is the app where all the activity data is stored.

The Smart Band connects to the phone over Bluetooth 4.0 (LE) and allows the phone to be paired with one more accessory over Bluetooth. The Lifelog app stores the activity log and even shows it separately. It showed me the how many steps I had walked, how many calls I took or made using the phone, my sleeping hours, etc.

In all, it tracks 12 different activities. It is basically a snapshot of what you were doing, where you were doing it, the weather at the time and so on. The band also notifies the activity on the phone. It also has the ability to wake up the user at a scheduled time provided he/she is not in deep sleep. This works beautifully.

The band stores the data for a couple of hours even when the phone is not around. It automatically updates the app when paired with the phone later. If you often leave your phone behind, it will notify you as soon as it goes out of the range. Sony has not restricted the band to work only with Sony smartphones.

It can work with any Android smartphone running KitKat. However, the experience wasn't good. The band failed to record the logs at times. Even when it did, there was a long lag in getting updates.

Verdict:Sony has done a good job but the band needs some enhancements

Track your workouts with Alcatel One Touch BoomBand