Can the Modi government fund the bonanza of sops for voters without wrecking the country's financial stability? 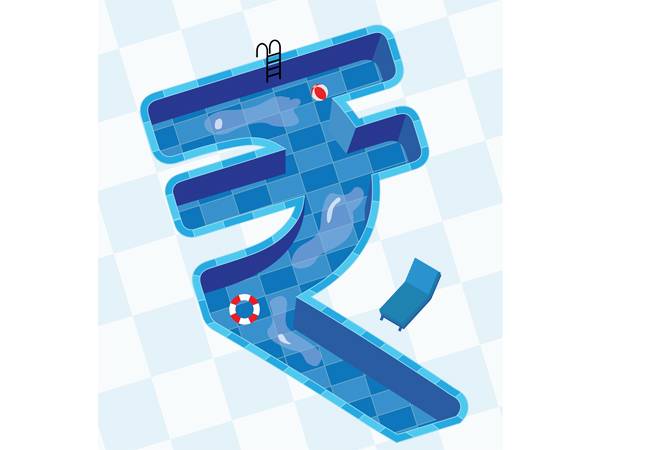 Interim Finance Minister Piyush Goyal's maiden Budget speech was an unabashed pitch for bringing the Modi government to power, not just for one additional term of five years, but till 2030.

It was the longest interim Budget speech on record because a good part of it went into boasting about the government's achievements and also about laying out the vision for the next 10 years if the BJP under Modi were to be re-elected.

Unlike most Budget speeches of the decade, which have often digressed into banalities or tried to cover too wide a ground and appeal to too many people, this had a sharp focus - aimed at farmers and the poorer workers who have made their disenchantment felt strongly, and at the lower end of the tax payers, who have been vocal about bearing the burden without getting any reward. The rest of the speech essentially fell into two brackets. The first was a listing of the government's achievements (macro economic stability achieved by bringing down inflation and deficits, maintaining high growth, Swacch Bharat, various PM Yojanas and about the landmark laws passed - Goods and Services Tax and Insolvency and Bankruptcy Board. The second part was a listing out of the vision for the next 10 years, which was nothing more than a rewording of the BJP's 2014 pre-election manifesto with some minor tweaks.

There were some random points thrown in - artificial intelligence, which found a mention in the speech but no allocation in the Budget, or the 100,000 digital village goal in five years or data prices. But these were quick mentions without much substance or allocations.

Equally interesting were the things that the speech did not focus on - education, skilling or jobs. Others like Make in India found fleeting mention.

It is hard to argue with the focus on farmer distress. The government was acutely conscious that it had messed up on agriculture - despite hiking Minimum Support Prices for 22 crops and spending more on procurement than it had budgeted for, farmer distress had been rising and it had led to losses in three major state elections. The Congress under Rahul Gandhi seemed to be promising much to farmers if it were to be elected in 2019, even if it had no clue about where the money would come from or what it would do to the government's finances. Goyal's speech (and Budget proposals) decided to trump whatever Rahul Gandhi would think of promising next, by offering a straight Rs 6,000 per annum (of which Rs 2,000 would be paid immediately) to farmers with land below 2 hectares as income support.

This was clearly a last minute thought - there were no announcements made on spending and additional Rs 21,100 crore from the 2018/19 Budget till the speech - and a hasty Rs 75,000 crore was budgeted for the coming FY for this in the Budget expenditure proposals.

The other two major proposals would come into effect from April 1 though - the relief for tax payers up to Rs 5 lakh of income and the major announcement on a pension scheme for the poor. 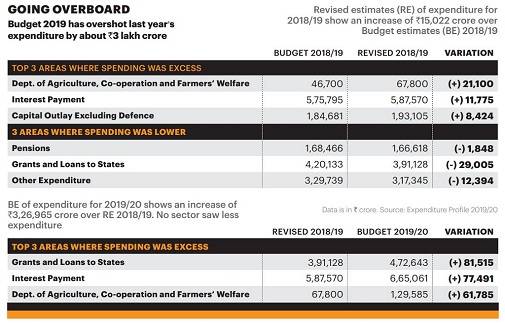 The interesting part though was the fact that the government said it would be only a minor slippage from the fiscal target - going up from 3.3 per cent of GDP to 3.4 per cent of GDP in the current year, and talking about a 3.4 per cent increase in the coming year (original target was 3 per cent) despite the massive additional spends on the income support scheme and the shortfall in revenues collected - especially GST - so far. (This also shows that the government has given up on its goal of following the Fiscal Responsibility and Budget Management Act as it had promised.)

Data shows that the government is likely to miss the GST collection target by over Rs 1 lakh crore for the current year. So how is it planning to miss the fiscal target by only 10 basis points? It has scrimped on Grants and Loans to States and it is possibly overestimating what it will collect through non-tax revenues. There are also things that have been kept off-balance sheet. But these still need to be paid - if not immediately, in the next financial year. Where is that money going to come from?

Next year, the income support for farmers has been budgeted at Rs 75,000 crore - and it could well be an under estimate. The revenue projections seem even more ambitious - the interim FM projected a sharp increase in GST for the whole year, which seems a stretch given that further relief is being given to small businesses and some product rates are being revised downwards. In fact, many economists think that the fiscal target will be missed by a wide margin not only this year, but next year as well. And that could lead to a cascading effect on the economy. Not being able to meet the revenue targets will hit its ability to spend or make it resort to reckless borrowing to meet its promises. That in turn could squeeze the ability of the private sector to borrow easily. And it could lead to global investors losing faith in the government's intention to adhere to the path of fiscal discipline. In its effort to give sops to voters, the government might well end up creating the same sort of economic mess the UPA2 had created. But then, that is the problem for the FM who will make the next Budget speech - sometime in June-end or July.

Too Little Too Late