Sports the next big thing

Cricket-largely thanks to the IPL-is where the action is. But the big money sloshing around could go a long way in the creation of a broader sports ecosystem. 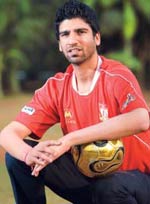 Nandan Piramal
Saturday, March 20: Venugopal Dhoot is upbeat. There are less than 24 hours to go before the winning bidders for the two new franchises of the Indian Premier League (IPL) will be announced. The Chairman of the Rs 20,000-crore Videocon group of companies had come agonisingly close a fortnight ago to realising his ambition of owning a team-out of Pune-in the high-profile 20:20 cricket tournament. With an approval from the board of Videocon Entertainment, an associate company of Videocon Industries, to bid $320 million, and with Bollywood star duo Kareena Kapoor and Saif Ali Khan in tow (in line with an IPL diktat that makes the presence of well-known faces mandatory), Dhoot was ready for the kill.

However, since there were only two bidders in the fray, the IPL authorities decide to cancel the bids and revise the criteria. The bank guarantee to be provided by the bidder is subsequently reduced from $100 million to $10 million. March 21 will now be when the fate of Dhoot's bid is decided.

Sunday, March 21, 11 a.m. Location: The Arcot room in ITC Park, Chennai. Amongst those present are IPL Chairman Lalit Modi, Board of Control for Cricket in India (BCCI) President Shashank Manohar, BCCI Secretary N. Srinivasan, Delhi District Cricket Association President Arun Jaitley and BCCI Vice President Rajeev Shukla, along with senior officials from five consortia that have turned up for the bid. These include, other than Videocon - represented by Jyoti Shekhar, CEO, Videocon Entertainment - the Ahmedabad-based Adani Group (which was the other bidder ready the first time around), a consortium led by Pune businessmen Cyrus Poonawalla and Ajay Shirke, Subroto Roy's Sahara Adventure Sports and a relatively unknown entity called Rendezvous Sports World.

The presence of heavy-hitters like Sahara and Adani amongst the bidders doesn't faze Dhoot (who is in the hotel but plans to make his presence felt only if he is one of the winners). "I was very confident-99 per cent sure that I would win. But then as they say in cricket: 'The Umpire's decision is final,'" grins Dhoot, whose flagship company bagged the franchise rights for India for the World Series of Boxing (WSB) last July.

Half an hour later, the Arcot room is abuzz as the results are announced. Sahara, with a $370-million bid, wins the Pune franchise. And the littleknown Rendezvous Sports emerges a surprise #2, with a bid of $333 million, to grab Kochi. Dhoot loses out by just a few million dollars. He's disappointed but hardly regretful. "Anything more than $320 million would not have made business sense," says the onetime captain of the cricket team of Pune's Ferguson College. And he isn't giving up on the IPL. "If anybody is willing to sell, we are ready to pick up a 10-20 per cent stake. But it should make business sense," stresses Dhoot. At the time of writing, Dhoot was keen to pick up to a 20 per cent stake in IPL team, King's XI, Punjab.

If it's sport, it has to be cricket. And these days, if it has to be cricket, it's got to be IPL-at least that's what team owners, wannabe team owners, advertisers, broadcasters, sponsors and fans seem to believe. Players who are being auctioned for record sums ($750,000 for Kieron Pollard in IPL 3 is perhaps equivalent to what the top 10 players in the domestic football I-league, the top tier in Indian football, earn in a year); broadcasting rights that are being sold for $1.64 billion for nine years with the broadcaster SET Max hoping to recover that, and more, by selling airtime at an average Rs 5 lakh for 10 seconds; a lead sponsor (DLF) that's willing to shell out Rs 40 crore a year for five years, and five associate sponsors who collectively bring in another Rs 90 crore annually; and don't forget the fans, many of whom in the East aren't thinking twice before forking out Rs 32,000 to watch a match sitting in a special VIP box with a tinsel town superstar (in Eden Gardens with Shah Rukh Khan, owner of the Kolkata Knight Riders).