A recent study by National Council of Applied Economic Research (NCAER) and Roopa Purushothaman of Future Capital Research declares Surat as the city with the highest average household income (pegged at Rs 4.57 lakh) in the country. This might surprise many. But keen students of history are unlikely to be among them. For it’s in this city that the East India Company set up its business in India (in 1608) before expanding across the rest of the country. Warriors from neighbouring states periodically sacked the city in that era. No looking back: Surat is en route to becoming a world-class city
Today, Surat’s pole position among India’s most prosperous cities can be attributed to its booming industries, its demographic make-up, the entrepreneurial skills of its populace, its pot-pourri of cultures and support of the local government. The two key industries in Surat—diamond cutting and polishing and textiles—form the backbone of the city’s economy.

Close to Rs 45,000 crore worth of diamonds are cut, shaped, polished and exported from Surat. The diamond industry employs about 5 lakh people in Surat. The Rs 45,000-crore textile industry, on the other hand, employs about 8 lakh people and accounts for 20 per cent of India’s total textile output. In all, more than 1 lakh looms, and 475 dyeing and printing mills churn out 25 million metres of fabric a day. The city has over 60,000 wholesale fabric trading shops.

“Surat is geographically very well placed. It has been a port historically. The city is almost equidistant from Ahmedabad and Mumbai, the twin centres of commerce in Western India,” says Pravin Nanavati, a leading diamond merchant. The NCAER study also found out that nearly 33 lakh Surtis—74 per cent of the city’s population—were below 35 years of age. That has led to an explosion of the consumer culture, which, in turn, has resulted in a mushrooming of malls and other shopping centres. “More than 28-odd shopping complexes are coming up. There is a construction boom going on,” says Gopal Goswami, a city-based entrepreneur who works on infrastructure projects. 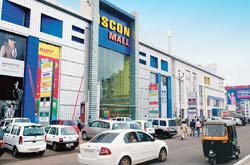 The mall culture: Thirty-odd shopping complexes are coming up in Surat
“About 16 lakh sq. feet of mall space is coming up by mid-next year in the Piplod Dumas area alone. The area will have 24 multiplex screens around the same time next year,” says Kamlesh Patel, a Partner with Vrundavan Developers, which is constructing a mall called Imperial, which will have a built-up area of 4.85 lakh sq. ft. Over 72 national and international players will have space in the mall.

Surat’s success story is incomplete without a word about its entrepreneurial culture. “I am blessed to be in this city,” says Ajoy Bhattacharya, Honorary Secretary of the Southern Gujarat Chamber of Commerce. A Bengali by birth, Bhattacharya was raised in Madhya Pradesh but later moved to Surat.

About 16 lakh sq. ft of mall space is coming up by mid-next year in the Piplod Dumas area alone - Kamlesh Patel, Partner, Vrundavan Developers
“There is no city that can stand up to the attitude, the simplicity, the resilience and the happy-go-lucky attitude of the people of Surat. Bombs are found in the city and in a couple of hours people are eating paani puris at the galas,” says Bhattacharya, who also believes that the city’s welcoming attitude towards immigrants is also responsible for its prosperity.

Bhattacharya, a Ph.D in Economics, came to the city to teach at the local university but ended up setting up his own business there. In fact, Nanavati, Goswami and Bhattacharya were neither born nor raised in Surat.

Surat is almost equidistant from Ahmedabad and Mumbai, the twin centres of commerce in W. India - Pravin Nanavati, Leading diamond merchant
Proactive help from the state and local governments has helped Surat’s cause in no small measure. Its municipal corporation, the oldest in the country, is among the most professionally-run.