Companies which took on large debt before the downturn are having a harrowing time repaying them. 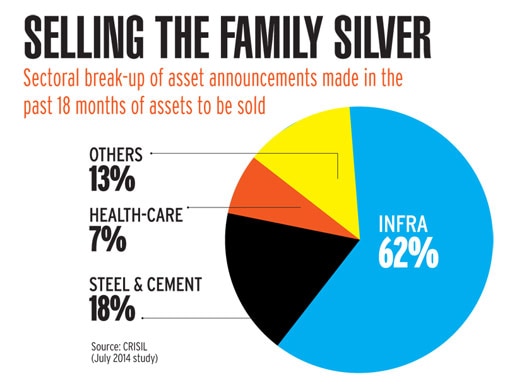 What accounts for this stunning reversal of fortune Suzlon borrowed heavily to fund the acquisition of German wind power company REpower Systems (now called Senvion). Its consolidated debt jumped from Rs 450 crore on March 31, 2006, to Rs 5,162 crore a year later, interest cost rising from Rs 65 crore to Rs 276 crore during the same period. Then came the 2008 downturn and demand shrank. (The acquisition was completed in 2011.) With the company defaulting on its loan repayments, its share price tanked. It has since undergone a debt restructuring programme and sold some of its assets, but at the end of 2013/14, its debt still stood at Rs 10,153.35 crore with interest cost of around Rs 1,221 crore, while it incurred operating losses of Rs 167 crore.

Suzlon is not alone, but part of a pattern. In the mid-2000s, with the Indian economy galloping ahead, many companies embarked on ambitious capacity expansion ventures, including overseas acquisitions, largely funded by debt. But with the downturn, the global economy went into a slide and the domestic economy too followed suit after 2010, totally upsetting their business plans. Increasing difficulties in acquiring land for projects and getting environmental clearances compounded their problems.

Worst affected were companies in sectors such as capital goods, infrastructure, construction, power, and metals, which have long working capital cycles and gestation periods for projects. Falling revenue and profit affected their capacity to service debt. Reliance Communications, GMR Infrastructure, GVK Power and Infrastructure, and Hindustan Construction are among the big names that like Suzlon, saw their debts mounting and revenues falling.

"Several companies had gone in for capex, which they could not execute and which left them saddled with debt," says Mahantesh Sabarad, Deputy Head of Research, Institutional Equity, SBI Capital Securities. 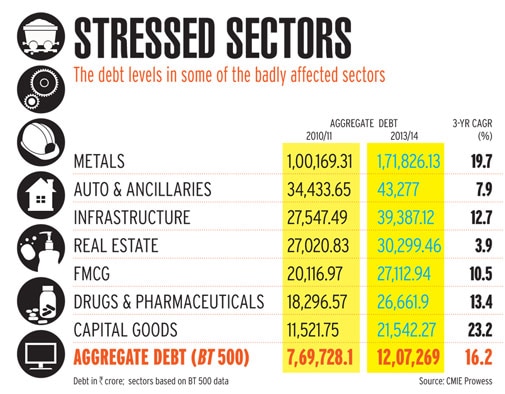 "To make matters worse, they could not raise funds due to non-conducive equity markets. The external commercial borrowing route was also closed for many after S&P and Fitch downgraded India's sovereign ratings to negative in 2012."

How bad is the problem for Indian industry as a whole and how is it coping? To get an overall estimate, Business Today looked at 361 of the companies in the BT 500 list - excluding the banking and finance companies, those which had not published their sheets after March 2013 and those whose data was not available for the current fiscal year. The aggregate standalone debt of these 361 companies has risen from Rs 7.7 lakh crore in end-March 2011 to Rs 12 lakh crore in end-March 2014. The debt grew by 20 per cent in 2011/12, 13.5 per cent in 2012/13 and 15 per cent the following year - a compound annual growth rate of 16.2 per cent. A standalone debt figure, however, does not necessarily indicate that a company is in trouble. "In a growing economy, companies go for borrowings when they need working capital," says Vivek Gupta, Partner, BMR Advisors.

"The debt level, in itself, does not establish that a company is over-leveraged. One has to look at indicators such as debt-equity ratio, interest coverage ratio, etc."

Debt-equity ratio gives the proportion of a company's assets funded by debt to that provided by shareholders. A high debt equity ratio - the danger mark varies depending on the sector - is considered unhealthy as it shows a company is over dependent on debt for its operations.

Capital intensive sectors such as infrastructure and capital goods usually have a debt-equity ratio above two, while for companies in software, the figure ought to be much less, below 0.5. 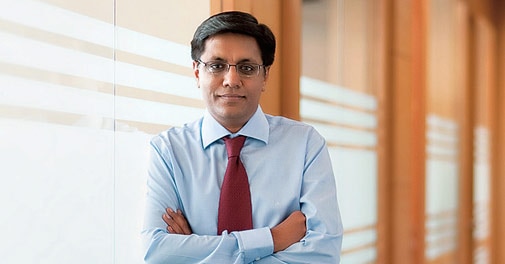 'A number of companies have gone in for qualified institutional placements. This has increased their equity component, thereby bringing down the debt-equity ratio,' says Neelesh Surana, Head of Equity, Mirae Asset Mutual Fund.
So how do the 361 companies fare on these two parameters?

A dozen among these companies appear very precariously poised indeed. At the end of 2013/14, they had debts of more than Rs 1,000 crore, debt-equity ratios of more than three and interest coverage ratios of less than 1.5. Many in the list are high profile companies: Adani Power, Asahi India Glass, Hindustan Construction, Bombay Dyeing, Ranbaxy Laboratories, Jaiprakash Power Ventures, etc. There were 40 companies with interest coverage ratios of less than one, up from 24 such in 2011/12. The main reason is projects coming to a halt in the power and infrastructure sectors. Broadly, companies are using two ways to tackle debt. "A number of them have gone in for qualified institutional placements (QIPs). This has increased their equity component, thereby bringing down the debt-equity ratio," says Neelesh Surana, Head of Equity, Mirae Asset Mutual Fund. Indeed, the median debt-equity ratio, which was 0.42 in March 2009, steadied at around 0.35 during the next four years. In 2013/14, it went down further to 0.28.

According to Prime Database, India Inc raised more than Rs 2,000 crore through QIPs in 2012/13 and 2013/14. Fundraising through QIPs has seen a significant jump this year with Rs 20,171 crore already raised so far. Among the companies taking this route is Reliance Communications, which raised Rs 4,808 crore through QIPs this year.

The other means of reducing debt is selling off assets. A Crisil report of July 2014 said 21 companies had announced 36 deals in the past 18 months to divest assets and sell equity to strategic partners which would raise Rs 80,000 crore - nearly a fifth of their total debt. Not surprisingly, 62 per cent of the assets sold will be by companies in the infrastructure sector. The report also estimates that another Rs 60,000 crore will be similarly raised in 2014/15.

These measures have started yielding results. CRISIL's credit ratio (ratio of number of companies showing credit quality improvement to deterioration) was 1.64 times for the first half of 2014/15 with 741 upgrades as compared to 451 downgrades. However, the ratio of the size of debt of upgraded firms to that of those downgraded (excluding financial sector players) was 0.59 times during the same period, showing persistent high debt levels. "Companies with stretched balance sheets are being forced by lenders to de-leverage either through raising fresh equity or sale of assets," says S. Krishna Kumar, Head of Equity, Sundaram Mutual. "Operational assets attract buyers even in a weak environment as long as the cash flows are certain."

The new government has also stimulated the market and there is talk of many fresh equity issues over the coming year, amounting to Rs 70,000 crore to Rs 1,00,000 crore. This too will help companies raise funds and lighten their debt burden.

"We expect more activity in terms of fundraising and asset sales in the next 12 months," says Gupta of BMR Advisors. "More asset sale deals would be executed and more companies would be coming up with equity issues. We can also see M&A activities picking up."