Hey, there's an app for that!

As of now there are close to 90,000 tablet-specific applications for the iPad. While there is no official figure from Google about Android OS apps, guesstimates put the figure at some 3,500 apps (well, they're primarily phone apps that also run comfortably on tablets).

Tablet apps, as you may be aware, are intended to take advantage of the device's touch-friendly interface, high portability, extended (8-10 hour) battery life and larger screen form factor. Here, we take a look at some of the best applications available on these devices today across various operating systems. As of now there are close to 90,000 tablet-specific applications for the iPad. While there is no official figure from Google about Android OS apps, guesstimates put the figure at some 3,500 apps (well, they're primarily phone apps that also run comfortably on tablets).

Honeycomb, or Android 3.x, Google's tablet-flavoured OS, has pushed through about 100 apps so far. The PlayBook has managed to fire up approximately 3,500 apps for its slate. Here are some the apps that we would recommend to our readers.

SOME FOR THE NEWS BUFFS
There's always BBC (replete with a live radio feed), CNN and New York Times along with a surfeit of individual news sources available on tablets. Yet, news aggregators like Pulse News and News360 can pull in news stories- topics-wise-from multiple news sources across the Internet even as they are posted. Both free apps are available on Android tablets as well as the PlayBook and theiPad. For those who want to watch TV on the iPad, there are NDTV (with live streaming) and CNBC.

The MunduTV app fetches you live broadcasting from Aaj Tak, Headlines Today, and the entire NDTV channel bouquet. While all tablets have apps for videocasts and podcasts of events like the enthralling TED Talks, enchanting Discovery Channel videos, or entertaining Dilbert animated toons, etc, the PlayBook has an inherent advantage: it downloads and stores these directly on the device. 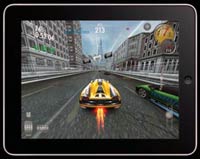 FOR THE AFTER HOURS
When it comes to gaming, no tablet across platforms can seem to stay away from the supreme swine-slaying sensation called Angry Birds. Another common denominator is the car racing game, Need for Speed. While the PlayBook already has NFS, an Angry Birds version is expected soon. Action heros will love Infinity Blade with its eyepopping visuals that have been optimised for the iPad 2 gyroscope. And if you're a sedate Scrabble, Sudoku or Snakes & Ladders lover, you're going to be delighted with the iPad versions as well. Flying enthusiasts will derive their mile-high thrills with Flight Control HD. On Android tablets, the running-jumping-collecting-block-pushing exploits of that Cordy fella will have you hooked, if the addictive strategy game Paradise Island doesn't. SOME OFFLINE READING?
Talking of offline stuff, many a time you come across an article on the Web that you like but don't have the time to read. With Read it Later installed (on IE, Chrome, Safari, Firefox, etc), you can dog-ear it on your PC or Mac and using the RIL app on your iPad and Android tablet. Similarly, you can also install Instapaper -- or it's Android client, InstaFetch. PERSONALISED MAGAZINES
Zite, an excellent free app on the iPad personalises its entire reading content according to your whims and fancies. Another free app, Flipboard, aggregates your newsfeeds and your social media links in a magazine-style layout. If you are willing to shell out $5, Early Edition 2 will provide you with some excellent reading--that you can browse offline as well.

FOR THE BOOKSHELF
You can easily turn the expansive screen of your tablet into a book reader. The best software for this on Android and the iPad is the Kindle app. Gratis code, it gives you direct access for purchase and download to the world's largest e-papyrus store that offers a stockpile of over 8,10,000 ebooks on its digital shelves. The app allows you to bookmark, automatically sync your last page between various Kindle devices (including PCs), adjust the text size, brightness and colour mode as per your preference. Playbooks only have Kobo so far-an app that has a comparatively limited. 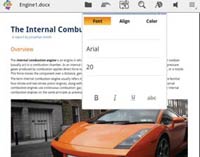 BUSINESS AS USUAL
For productivity apps, get the iWork suite on the iPad, comprising Pages (word processor), Numbers (spreadsheet), and Keynote (presentation programme). Then, Documents that even syncs your files to your Google Docs account. Android users can get ThinkFree Office or QuickOffice Pro HD. The Playbook comes with Documents To Go (Word, Sheet and Slideshow) pre-installed. Other good alternatives are Documents, Documents2Go, Files to Go, and Office to Go. For a to-do task manager on Android and iOS, go for the free Wunderlist. For handling and marking-up PDF and other document formats on the iPad, get GoodReader. Android-walas fetch exPDF Reader.

AND THE MAGAZINE RACK?
Nearly every major newspaper and magazine across the world has an iPad-specific version (replete with annual subscriptions) by now. However, you can also buy a vast number of periodicals via the Zinio app. Available for Android and iPad slates, Zinio is a re-publishing service that vends high-resolution composite scans of magazines (and books). 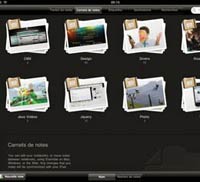 PLEASE NOTE THIS
Evernote is one of the best free note-taking applications on Planet Earth. Not only does it synchronise your text, image and voice note entries automatically to an Evernote web account but also makes everything automatically available to you on other devices-iPad, Android device, PC, iPod, or a Windows or BlackBerry phone. When you want to take notes during a meeting or interview there's nothing better than SoundNote or Audiotorium on the iPad. These apps track what you type and draw while recording audio at the same time. If you are fretting about syncing-and taking back ups-of documents on your tablet, there's the world's favourite backup service, Dropbox.

Bumps on the 3G highway