For the 12,000-odd contract workers who walk through the gates of Tata Steel's Jamshedpur plant of every day, a small new system set up last year on the shop floor has been a big boon. They have been able to instantly access information such as health and attendance records of any contract worker through the Contract Labour Management System (CLMS) linked to the plant's internal computer network.

The system is very useful mainly because the shop floor is not manned by the same set of people every day. Contractors entrusted to supply labour round the year deploy workers for a particular day by selecting them from a large pool of pre-screened labourers whose records are with the company.

According to Amit Kumar, Head, Central Maintenance Planning, Tata Steel, the database can be very useful for various reasons. "Steel plants have a lot of high-rise structures. Working on top of them could be dangerous sometimes. Through this system we can instantly find out if a particular worker has high blood pressure, blood sugar levels or vertigo. Someone with such a profile will be spared from such works," he says. The global steel major employs over 75,000 people worldwide of which 36,199 are with India operations. Suresh D. Tripathi, Vice President, HR, Tata Steel, says the upcoming steel plant in Kalinganagar in Odisha will employ around 5,000 people and the CLMS will be deployed there too.

Tata Steel's India plan appears on track despite the fact that the last financial year (2013/14) had not started on a good note.  The steel major had to write down $1.6 billion for goodwill in 2012/13. In 2013, the consolidated net profit for Q1 was Rs 11,423.30 crore. But it fell to Rs 9,509.50 crore and Rs 4,995 crore in Q2 and Q3, respectively, before recovering in Q4 to touch Rs 10,711.90 crore with its basic and diluted earnings per share (EPS) at Rs 10.20, according to the Bombay Stock Exchange (BSE). In the same quarter, Shanghai Baosteel Group Corporation, the world's second-largest steelmaker after ArcelorMittal, had posted an EPS of 0.35 renminbi or Rs 3.39. However, analysts say, Tata Steel Europe, which accounts for two-third of its entire operations, remains 'on a razor's edge'. 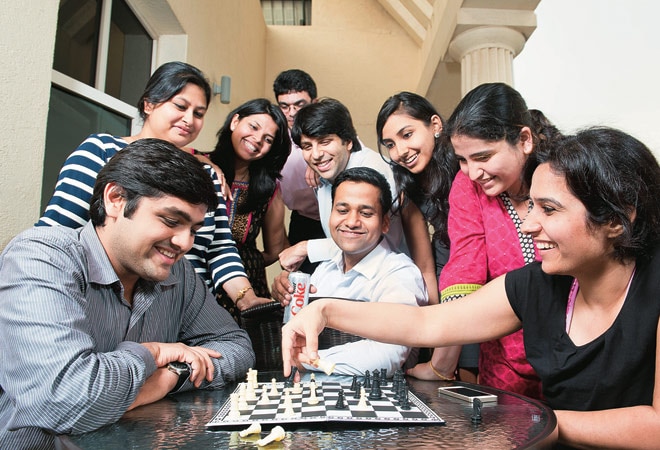 WORK HARD, PLAY HARD: Tata Steel employees enjoying their leisure time at their office
Another group company, Tata Motors, too is going through a rough patch. Industry sources say 2013/14 was dismal as car sales, for the first time in 10 years, fell by six per cent over 2012/13 and market leader Maruti could grow only by less than a per cent. Tata Motors was particularly hit as 35 per cent fewer cars were sold compared to 2012/13.

All this and the sudden death of then-managing director Karl Slym in January this year not only brought media attention but also put to test the company's ability to overcome tough times, says Gajendra P. Chandel, Senior Vice-President and Chief HR Officer, Tata Motors.

He says the top management continued to perform because senior executives worked in sync. "We got our top 100 leaders trained through the Leadership Edge programme so that all of them understand the organisation and the way it is going forward and how it needs to be led by these managers," he says. As part of this initiative, the managers travelled far and wide. They visited the offices of customers and travelled in buses and trucks to know customers' needs and also how their competitors operate. Even the desk-bound functionaries in finance and administration were part of the programme.

For the country's largest maker of trucks and buses, engineering and production have always been the company's forte. It is the only Indian company to have carved out two new segments in the crowded low-price band of India's automobile market - Nano in passenger cars and Ace in the commercial vehicle segment. The Ace has eliminated the three-wheeled goods carriage from major markets. Chandel says the aim now is to make itself more customer focused. Eighteen months ago, Tata Motors had articulated a vision on which it proposed to rest its organisation culture - accountability, customer and product focus, excellence and speed (ACES), a name that seems to draw from its best-selling product. And it seems to be a harbinger of changing times at Tata Motors.

Meanwhile, on the human resource front, the group companies continue to follow one of the basic tenets of group founder Jamsetji Tata that "people need to be taken care of and they will take care of the rest". From this stems the idea of building and maintaining an ecosystem in which the staff remain comfortable. "There are workers at the Jamshedpur plant who have been there for four generations," says Tripathi. He says a right mix of challenging work environs, scope for learning and growth, and a feeling of contributing to the organisation's growth suits perfectly for most employees. "In terms of growth, not just the employees but even their families have felt that," he says.

According to K. Sudarshan, Regional Managing Partner (Asia) at EMA Partners, an international executive search firm, this is the hallmark of any great company. "The sense of ownership that Tata companies provide is unique," he says. But the expectations in these changing times are high. "Compared to the earlier generations, job gratification is more important for the present ones," he says.

Raghav Sud, Head of Financing Strategy at Tata Steel, is a case in point. At 32, he has already been at the helm of deals to finance the company's various high-profile acquisitions such as the Singapore-based Natsteel. In 2011, he was posted in London to help manage the finances for Corus Group Plc. "It was a nice experience," says the soft-spoken Sud, who lives just a 10-minute walk away from the Tata Group's offices in south Mumbai.

According to N.S. Rajan, Member, Group Executive Council and Group Chief HR Officer, Tata Sons, exposing employees to different disciplines would do good to their range and skills. "It would be like going back to school and learning afresh with the experience behind you," Rajan wrote in an email to Business Today. WELL-CHERISHED LEGACY: Tata Motors' Chandel (centre) with Anil Tyle, AGM, Corporate Facility Management, and his son Nikhil Tyle, Assistant Manager, Telematics and Analytics Programme
This fits well with employees who belong to the Millennial Generation like the 29-year-old IIM Calcutta alumnus Ruchika Arora. She joined Tata Steel in 2008 and has worked on a bio-fuel project in Delhi and a CSR effort in Indore. She has sold steel to companies like Honda and Hero, and now works with the office of Group Chief Financial Officer Koushik Chatterjee. A quintessential Generation Y executive, she looks forward to a new challenge every two years or so. At the group level, Rajan says, one of the initiatives is on 'diversity and inclusion' launched by Chairman Cyrus Mistry. It is being headed by a newly-formed diversity council comprising CEO and CXOs, and will focus on gender, race, ethnicity and special abilities.

As part of a two-pronged strategy, the group first aims to double the number of female employees by 2020. Currently, there are 115,000 women in a workforce of 540,000. But as one goes to the top of the pyramid, the number of women comes down. Here comes the second objective. "It is to groom 1,000 women leaders in the group by addressing the constraints that they face on their way up the ladder," says Rajan. Two women - Sarita Shah as Head of Corporate Finance, Investor Relations and Risk, and Dipali Talwar, Group General Counsel - have already joined the top ranks in the last one year or so.

In the last one year, Tata Motors has also put together a differentiated reward mechanism, in which the top 10 per cent to 15 per cent people can get up to 60 per cent higher pay than the median performers. The bottom 5 per cent to 10 per cent is put on a performance improvement plan.

The group leadership is also thinking of something more radical. Rajan says a key focus area is Tata Next Practices. This is a 360-degree benchmarking of policies and practices that have consistently delivered outcomes.

It will cover efforts that span internal benchmarking of Tata companies, external benchmarking of companies vis-a-vis global peers and also what Rajan calls 'first principles derived from academic research'. The last one will include ideas from the global research community that speaks of fundamentals in business.