The founder of the Tata Iron & Steel Company - now called Tata Steel - never lived to see it incorporated. TISCO was born in 1907 - three years after Jamsetji Nusserwanji Tata died. Tata had been pursuing the dream of setting up a steel plant in India since at least 1882. In 1902, he even travelled to Pittsburgh to seek the help of American geologist and metallurgist Charles Page Perin. Within a decade of its birth, TISCO, the first Tata company to bear the family name, had already made a mark: in June 1917, Perin would brag about TISCO at a meeting of American mining engineers, saying it produced pig iron for as little as $5 a tonne.

Tata Steel's history is inextricably linked to that of India, with the likes of Mahatma Gandhi and Subhas Chandra Bose having intervened in its affairs at different times. It has made boardroom history, too - especially the bitter battle between Russi Mody and Ratan Tata in the early 1990s, for control of the company, which ended with Mody's ouster.

There are quirky tales about the company as well. The legendary J.R.D. Tata, who later became group chairman, once recalled the saga of T.W. Tutwiler, general manager from 1916 to 1925. Tutwiler, he said, was "feared and loved as the uncrowned king of Jamshedpur... He thought that among his many accomplishments, he could play poker." The board would meet in Jamshedpur every Christmas, said Tata, mostly so that the directors could engage Tutwiler in a game of poker and dent his savings. The meetings stopped after Tutwiler left.

Life was probably easier for the directors then. Today, they are all on their toes, with Tata Steel having acquired factories and mines around the world. Their gambles now are business gambles, where the stakes are much higher. With the addition of Tata Steel Europe - formerly Corus - the company is the world's sixth-largest steel maker.

Tata Steel has come a long way from the 1950s, when it made more than 70 per cent of the country's steel and yet had to ration it out, partly because of the artificial shortages during the licence raj. Because the industry was protected, there was little incentive to improve technology. The open-hearth process for making steel, which Indian companies all used, took eight hours or more. But there was an alternative that took just 40 minutes. It involved injecting oxygen into molten iron to purify it into steel.

One momentous morning in 1980, the company's top metallurgists, including J.J. Irani, who retired as a non-executive director of Tata Steel in June 2011, met J.R.D. Tata in Mumbai, to discuss the best way to inject oxygen. The top-blowing method did not allow the gas and molten metal to mix well, while the bottom injection method was a maintenance nightmare, as the heat often damaged the vessel holding the iron.

A TISCO share certificate
Managing director Mody was not present. Tridibesh Mukherjee, who became deputy managing director in 2001, recalls in his epilogue to Tata Sons Director R. Gopalakrishnan's book The Case of the Bonsai Manager that Tata listened to the engineers for 45 minutes. Then he sent them off to the centenary match between the MCC and India, while he thought things over.

That afternoon, he declared that Tata Steel would go with the topblowing method, but keep its options open on bottom injection, in case the technology improved in the future. As it happened, it did; a method was developed that combined both approaches. Thanks to Tata's prescience, adopting it was easy. "I learned that the leader has to go beyond technical knowledge, and the process of doing so is serious listening... and directed thinking," Mukherjee told Business Today. 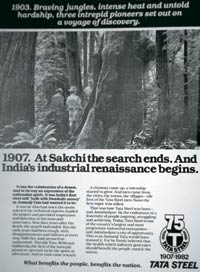 A 1982 advertisement
Click here to Enlarge
The company has seen its share of turbulence. V.G. Gopal, president of the Tata Workers' Union, was murdered on October 14, 1993. The next day, J.R.D. Tata, who was in Geneva at the time, sent a telegram to convey his condolences. This would be the last written communication by Tata, who died less than seven weeks later. 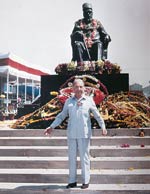 J.R.D. in front of J.N. Tata's statue in Jamshedpur
"Good industrial relations are what got us here," says current union president Raghuram Pandey. "You have heard Ratan Tata speak about Corus managers' time consciousness. At Jamshedpur, we've never looked at our watches when there was work to be completed." While Jamshedpur is a pillar from the past, the future will be more complex. A new plant will come up in Orissa, while Tata Steel Europe is set to cut 1,500 jobs.

Karl-Ulrich Koehler, CEO of Tata Steel Europe, told Business Today in December 2010: "A lot of goodwill has been generated internally... because of the parent's support to the European operations through the downturn." This perception will be tested as things get tougher at home and abroad.