Overseas buys that are beginning to work have helped create value in key companies.

In 2000-01, a devastating recession in the Indian auto sector took the wind out of the sales of Tata Motors, then known as Tata Engineering. Losses mounted to Rs 500 crore. It was around that time Ratan Tata, Chairman of the 90-company group, took a crucial call: The Tatas would henceforth cease to rely on a single market. The group's key companies that operate in sectors like steel, automobiles, chemicals, hospitality and IT services would attempt to grow overseas, too, by setting up outposts organically or by making acquisitions.

That may be one explanation for the 140-year-old conglomerate, which started the decade with a turnover of just under Rs 50,000 crore, ending fiscal year 2010 with sales of Rs 319,534 crore - that is growth of six times on a humongous base. What the numbers do not reveal, however, is the transformation the group has undergone since the dawn of the new millennium. 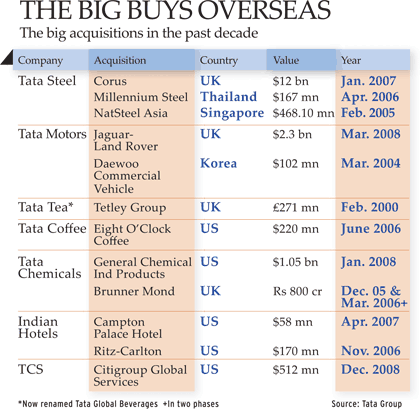 Back in 2000, most Tata group companies, with the exception of a few like Tata Consultancy Services, derived the bulk of their revenues from the domestic market. Today, 57 per cent of the Tata group's business comes from outside India's borders.

A significant chunk of this transformation can be attributed to the slew of big-ticket acquisitions the group has made. A back of the envelope calculation reveals that Tata group companies have spent about $19 billion in acquisitions since 2000.

Such buyouts, coupled with bright prospects for many of the domestic market-oriented businesses, have resulted in key Tata companies creating dollops of wealth for investors, as the BT 500 illustrates (see Back on the Road).

Take Tata Motors, for instance. In 2002-03, of revenues of Rs 10,855 crore, less than five per cent came from international markets. In contrast, during the last fiscal year, Tata Motors' revenues have increased nine times to Rs 92,519 crore. India's contribution: just 38 per cent. Revenues are just one part of what the company has gained. As you read this, Tata Motors is selling amongst the world's most affordable cars in India, the Nano, at about Rs 1,34,000, and the uber-luxurious Jaguar XJ in Florida for about $77,500, or about 25 times that amount.