The 25 most powerful women in Indian business

Listings are horribly hard to put together. This one is more so. For one, how does one measure power? For another, when there are so many talented and successful women in Indian business, how does one zero in on the 25 most powerful? The first question is relatively easy to answer.

Listings are horribly hard to put together. This one is more so. For one, how does one measure power? For another, when there are so many talented and successful women in Indian business, how does one zero in on the 25 most powerful? The first question is relatively easy to answer.

Power is what power does. To have a grand title is one thing, to actually do something that amplifies the power of the position, another. Ergo, we defined power as influence over an industry (like what RBI’s Deputy Governor Usha Thorat exercises), the ability to change the rules of the game (Kiran Mazumdar-Shaw of Biocon), or a distinction that’s unique (like Leena Nair becoming Hindustan Unilever’s first woman executive director).

Like in the previous three years, we relied on industry watchers to arrive at the final list of 25. They helped us identify eight new power women this year. You’ll meet them, and the others, in the pages that follow.

In early 2006, Bangalore-based Britannia Industries was looking down the wrong end of the barrel. Its CEO had quit and nimbler rivals, including ITC Foods and Parle, had grabbed market share in all segments.

Worse, senior executives were leaving in droves and the company faced crisis of confidence. To try and stem the rot, Britannia turned to Vinita Bali in the end of May last year. Bali, who previously worked with beverages giant Coca-Cola in Atlanta, became the first woman CEO to be hired by Bombay Dyeing supremo Nusli Wadia, who controls Britannia, for any of his group companies. 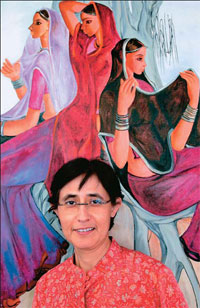 Vinita Bali
Bali has since managed to resurrect Britannia’s fortunes, with new products, heavy branding and marketing and some acquisitions, including Strategic Foods in Dubai. Bali (she couldn’t meet BT for this profile, since she was travelling in Europe) has put the building blocks in place. She now has to focus on growing Britannia’s margins and inevitably managing the testy relationship between the Wadias and Danon, their foreign partner in Britannia.

For Shobhana Bhartia, the year 2007 will go down as one when the many associations that the Vice Chairperson and Editorial Director of HT Media has forged came to fruition. 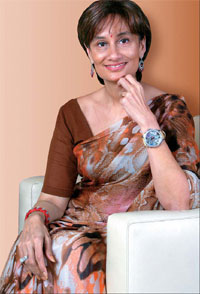 Mint, a business daily launched in February in association with the Wall Street Journal, is seen to be closing in on the No. 2 spot in its segment with an estimated circulation of 80,000 copies; Fever 104, an FM channel where Richard Branson’s Virgin Radio is the partner, debuted in Mumbai and Bangalore (it’s been in Delhi for 10 months now) this year and has done well for itself. Metro Now, a daily tabloid, launched this February in Delhi in association with former arch-rival Bennett, Coleman & Company, has managed to rack up 1.10 lakh copies in daily sales.

HT’s first quarter numbers were pretty impressive. Revenues were up 33 per cent at Rs 247.90 crore, while the bottom line jumped 212 per cent at Rs 30.6 crore. The stock (HT Media listed in September 2005) has been on a roll since June last year, going from Rs 78 or so to Rs 218 on September 12. The 50-yearold Bhartia, who is married to Shyam Sundar Bhartia, Chairman & Managing Director, Jubilant Organosys, has her hands full otherwise.

The Padma Shri awardee is a Rajya Sabha member and an active industry figure, who until recently was the Chairperson of the Audit Bureau of Circulation. Apparently, her focus now is on the Hindi daily, Hindustan, and HT’s internet initiatives.

Still, rumours keep resurfacing about Bhartia either selling her majority stake or merging with another media heavyweight. The lady never reacts to such rumours, and that only seems to add to her power halo.