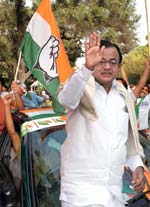 P. Chidambaram
It’s just a little over four hours since Palaniappan Chidambaram, 62, has presented his fifth consecutive Budget as the Finance Minister of the UPA government, and he’s already been through multiple press interviews, including a full-blown press conference.

His fifth consecutive Budget, which will be the last for this administration this time around, has been written with bigger political exigencies in mind: UPA and its allies have a general election to win next year, and that may be brought forward to later this year to cash in on the largesse the Budget has doled out to key constituencies, namely the farmers, who have been given Rs 60,000 crore in loan waivers, and the aam aadmi, who’s been showered with excise duty cuts to make his two-wheeler and small cars cheaper, and higher income exemptions to retain more rupees in his wallet. Will Budget 2008 win UPA and its partners popular votes?

'Growth should remain intact and growth must be inclusive'