Volkswagen, already top dog in Europe, China and South America, is ready for its big India push. Now that it has an indirect stake in Maruti Suzuki, here's why Indian carmakers ought to be worried.

Volkswagen will make its biggest splash in India in 2010. Some with a sense of history will call the drive 28 years late. For in 1982, when the Indira Gandhi government was on the lookout for a joint venture partner for its small car project, Volkswagen was one of the first few among global auto companies to be wooed. Its Wolfsburg, Germany headquarters wasn’t keen and Suzuki Motor Corporation, a little-known Japanese carmaker then, was intrigued enough to sign up with New Delhi.

Today, that venture, Maruti Suzuki makes one in two cars sold in India and is controlled by Suzuki. It's not exactly deja vu for Volkswagen Chairman Martin Winterkorn, who was less than a year old in the group when the Indians went hunting for an auto partner. But through a December 9 deal with Suzuki to buy a 19.9 per cent stake in the Hamamatsu, Japan carmaker, he has brought the Volkswagen back in the reckoning in India, the world's hottest growth market for automobiles.

Together with the inauguration of its 110,000-unit plant (the biggest German investment in India to date) at Chakan, an industrial town some 50 km north of Pune, Volkswagen has in it to dramatically alter the Indian car landscape. First, the Hamamtsu deal. Details of the "alliance"—that makes Volkswagen the biggest shareholder at Suzuki—are sketchy at best. All that Jörg Müller, Chief Representative of the group and Managing Director for India, will say is how the tie-up will give his company access to Suzuki's line-up of sub-compact (small) cars and how the deal will allow for technology sharing in new engine and transmission systems (read: hybrid and electric-powered cars). 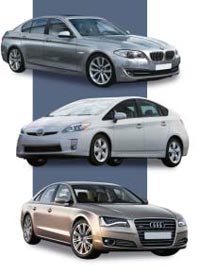 That's the global, 30,000 feet view. How will the partnership work in India, where Suzuki makes some 45 per cent of global volume sales and almost half its profits? There are the obvious benefits of access to small car platforms and sourcing components from India for Volkswagen, selling Maruti-made cars in Europe or South America through the Volkswagen dealer network, and, to stretch the envelope, even sharing future manufacturing platforms, which the German carmaker is really good at (more on that later). In August 2009, Maruti announced plans of setting up a Rs 1,000-1,500 crore research and development centre at Rohtak, Haryana. There has been intense speculation in industry circles that the December tie-up between Volkswagen and Suzuki will lead to joint development activities there.

But, the big opportunity with the Suzuki tie-up is the potential for Volkswagen, which ranks third behind Toyota and General Motors (GM) if truck and bus sales are included, to control the Indian market through the Japanese company. Four of five people with close insights into Suzuki and the auto business interviewed by BT predict that Volkswagen will increase its stake in Suzuki in the years ahead. None among the four wanted to be quoted by name.

Such an enhanced control is important if the fiercely determined Volkswagen is to catch up with bigger rival Toyota in cars. The German company, which owns 9 brands from Bugatti to Seat (see Volkswagen's Buyout Trail on page 74), has grown sales from 4.87 million units in 1999 to close 2009 with sales of around 6.5 million units (mostly cars; less than a million of these are trucks and buses).

While much of this growth in the past decade has been organic— Volkswagen sold over one million cars in China in 2008, becoming the largest foreign carmaker in China after a 1984 entry—the company has a history of giving itself leg-ups through mergers and takeovers. Since the 1960s, Volkswagen (and its subsidiaries) have bought Audi, Skoda, Lamborghini, Bentley, Scania (trucks) and significant shares in Porsche (which will merge into the Group by 2011) and MAN SE (trucks). And, now a significant minority in Suzuki.

Chairman Winterkorn has stated his aim of making the Volkswagen Group the world's largest car-maker by 2018. This dream could be realised sooner if—and, that admittedly is a big if—he is able to buy out Suzuki. "Osamu (Suzuki, the Chairman of Suzuki) is 80 and has no one in the family to run the company. It may make sense to sell control and hold a residual stake as a family trust," says an Indian industry leader, one of the four people who tell BT Volkswagen will eventually control Suzuki valued at around $12 billion (Rs 57,600 crore).

Then, there's balance sheet power that Volkswagen has behind it. Sure, it has been hit by the recession but it is relatively the least singed when compared with the Big Three carmakers from Detroit (GM, Ford and Chrysler) and even Toyota. That, and its #1 position in Europe, South America and China make it ready more than ever before for India. The company is likely to have ended 2009 as the world's biggest car market by volumes ahead of even the US. "The choice was whether it would go to North America, where it is not very strong, or India to add, say, half a million to sales," says Vikas Sehgal, a partner specialising in the automobiles business at Booz & Company, a firm of management consultants. "The market in the US is saturated and the choice was obvious."

Yes, India is where the numbers will come for global carmakers in the coming years. Indians buy some 1.3 million cars (not including utility vehicles) a year—a number projected to climb to two million by 2015 and double in the five years after. "That's a hell of a lot of cars for car companies to share around," says R. C. Bhargava, Maruti's Chairman and a close confidant of Chairman Suzuki.

Volkswagen's Müller agrees. "In the medium and long term, India is indeed a strategic growth market in the literal sense of the term. Engaging in India will allow Volkswagen to participate in (India's growth) and at the same time to meet its internal growth and return targets," he says. Through its group brands—Audi, Skoda and Volkswagen—it is targeting a modest 10 per cent share (up from 1 per cent now) in five-six years. This is not much bigger than the targets others such as Toyota and GM have for India and are planning small car launches in 2010. GM is launching the Chevrolet Beat in January and Toyota its muchawaited small car later in the year.

Again, to be sure, Volkswagen does not have a history of making small cars like the Maruti Alto, that eight of 10 Indians buy. Its entry product, the Polo hatchback, is likely to be priced around Rs 5 lakh. But that—very profitable, according to industry insiders—category is growing as more and more consumers shift towards what carmakers call the big small car referring to Hyundai Motors' i20 and Maruti's Swift. This shift could augur well for Volkswagen that with its German pedigree is known to churn out well-engineered vehicles built around common manufacturing technologies that afford it competitive costs.

The Skoda Fabia and Polo share a platform, for instance, as do the Golf, Jetta, Audi A4 and Skoda Laura. So too, sports utility vehicles Porshe Cayenne and Volkswagen Touareg. One hint that Volkswagen will follow that sharing strategy is evident in the size of the new Chakan plant, which together with the 30,000-unit Aurangabad facility, ranks at the top among second-tier carmakers in India. This will be so until a new Nissan facility of 200,000 cars gets operational near Chennai in 2010. The Volkswagen capacity, though small compared to Maruti's 700,000 cars a year plant in Gurgaon, is enough for it for now, believes Müller. Output from the Chakan facility can always be increased by adding a third shift.

Volkswagen has also been building distribution. Starting with three dealers in 2007, the group will, by end-2010, have 150 dealers across all its brands—a network larger than all but the market leading trio of Maruti, Hyundai and Tata Motors. The Volkswagen brand alone will have 60 dealerships by then. Still, others in the business point to the uphill task Volkswagen has in building its brand in India. High-end consumers are familiar with Skoda and Audi but the parent company's brand is virtually unknown here.

"Small car buyers are not the same as travelled and educated buyers of expensive cars. They need a brand to trust and I believe that is what VW is trying to achieve", says Mayank Pareek, Executive Officer of Sales and Marketing at Maruti, who admits his company is still taking the German company "very seriously". He and other competitors will be watching very closely when Volkswagen or Suzuki or both disclose details of the tieup later this year.

Volkswagen's ad spends, meanwhile, reflect how serious it is. In early December, when it launched Touareg and the New Beetle sedan, it took out the most expensive print advertising campaign in India ever with an estimated Rs 30 crore ‘roadblock' campaign across all editions of India's largest English daily The Times of India. Roadblock is industry lingo referring to an advertiser paying a premium to black out all other advertisers. Müller will need a lot more to block competition but it is clear that Volkswagen is the carmaker to watch out for in India this decade. More so, given the pride at stake—its success or failure here in India will make or break its dreams of global dominance. And, when dreams are that of your chairman, you had better deliver.

Audi: Acquired in 1964, present in India since 2007. Audi, along with BMW and Mercedes, comprises the troika of German luxury carmakers.

Seat: Controlling stake bought by Audi in 1986, 100 per cent in 1990. Volkswagen has not been able to expand Seat, Spain's largest carmaker, outside Europe.

Automobili Lamborghini: Acquired by Audi in June 1998. Sold in India through an exclusive importer since 2004. Audi's ownership has transformed Lamborghini; the Gallardo is one of the most successful sports cars ever made.

Bentley Motors: Snapped up just a month after Lamborghini. Also in India since 2004; is the leading Rs 1 crore-plus brand here.

Skoda Auto: Czech carmaker bought out in 1999. Volkswagen transformed a car perceived as cheap and unreliable into a mid-market, respected brand.

Bugatti: Acquired rights: 1998. Revived company: 2000. The storied maker of Bugatti died after WW II. Volkswagen restarted the brand and produced the Bugatti Veyron, the world's most expensive at $1.5 m.

Scania: Majority stake bought by Volkswagen CV in 2008 took it into large trucks space. Not in India yet.

Other Shareholdings: The Volkswagen Group has notable stakes in other companies.

Porsche: 49.9 per cent bought in Porsche AG in December 2009. This came as a result of Porsche's aborted bid to buy Volkswagen earlier in the year.

MAN SE: 29.9 per cent of truck maker MAN SE which Volkswagen wanted to merge with its CV unit and Scania

Suzuki Motor Corporation: A 19.9 per cent to be acquired by January, subject to regulatory approvals. This would make Volkswagen Group the single-largest share holder in Suzuki, which controls 54 per cent in Maruti Suzuki. Benefits for either side are not clear yet but going by Volkswagen's history and the absence of a clear heir in the Suzuki family make it possible that the latest deal may be the stepping stone to a big India presence for the German auto group.

Best companies to work for