The elephant learns to slow dance

After five years of breakneck growth, ICICI Bank eases its foot off the pedal.

I’m penning it down because I also have to prepare a note for my team,” quips V. Vaidyanathan, Executive Director (Retail & Rural) at ICICI Bank. As he explains to this writer the challenges facing the bank and its strategy to take them head-on, the youngest Executive Director at the country’s second-largest bank furiously jots down notes on a loose sheet. In between sipping a protein shake, the 40-year-old philosophises: “It’s a choice between doing what looks good (loan growth) versus what’s the right thing to do (deposit growth). We’ve got to do what’s right.” ICICI Bank headquarters in Mumbai
The first step for this bank that’s facing a slowdown in its largest portfolio of retail is to attack operating costs at all levels. In the first quarter of 2008-09, staff expenses were flat at Rs 532 crore on a year-on-year basis. Operating expenses rose by half a percentage point to Rs 1, 913 crore, while direct marketing expenses (DMA) plunged by 40 per cent to Rs 2,280 crore.

Branches will also be used more effectively. “Our aim is to make our branches more intelligent. They will deal directly with customers for loans. This move will not only save costs, but also result in better risk management,” says Vaidyanathan.

The loan origination process for many products (two-wheeler loans, credit cards) is being moved to branches. Earlier, the process began at the dealers or in a separate customer calling cell. The bank is doing away with multiple verticals for a single product class. For instance, the used car and new car financing divisions now operate as one; as do home loans and loans against property.

V. Vaidyanathan
Along with the slower growth in operating expenses, what will help boost ICICI Bank’s margins is a gradual rise in its current account & savings account (CASA). 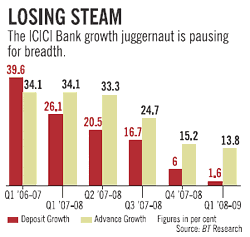 The bank has improved its CASA from 26 per cent in 2007-08 to about 28 per cent in the first quarter of 2008-09. The growing CASA will replace high-cost borrowings, which, in turn, will improve net interest margins (NIMs).

NIM—a key indicator of a bank’s performance— is the difference between what the bank pays for borrowing money (mainly through savings and fixed deposits) and what it earns on loans to corporate and retail. The bank’s NIM has shown a slight improvement from 1.7 per cent in the 2007-08 quarter to 2.1 per cent, despite a slowdown in its retail business. By 2010, the bank expects to reach the industry norm of a CASA of 40 per cent.