If the world’s fastest-growing telecom market is drawing service providers by the dozen, then it is also a honey pot for a host of new handset manufacturers. Several new players, big and small, therefore, see the Indian handset market as their new playground. Rajeev Khanna
If the world’s fastest-growing telecom market is drawing service providers by the dozen, then it is also a honey pot for a host of new handset manufacturers. Several new players, big and small, therefore, see the Indian handset market as their new playground.

Consider Fly Mobile, part of the Europe-based Meridian Group, which claims to be selling 100,000 phones a month and expects a 50-60 per cent increase in sales by Diwali. Rajeev Khanna, CEO, Fly Mobile, says: “India, at the moment, presents a rare opportunity.” How does it appeal to its customers? By ensuring that for the same price their phones offer at least 25 per cent more value than the competitors—either in features, functions, software, or in interesting bundles. Style and design are the big themes for Fly and young people are its favoured customers.

Or consider Intex Technologies, an Indian company which also sells laptops, monitors and other computing devices. Says Ramesh A. Vaswani, Vice Chairman, Intex: “We have no ambition to become either a Nokia or a Samsung. However, we certainly want to become the #1 Indian brand.” That’s not just talk: the company claims to be selling 60,000 handsets a month and hopes to double its sales in a year. And this from a company that started its handset business just two years ago. Playing in the Rs 2,000-7,000 range, the company focusses mainly on the Tier II and Tier III towns. Vaswani says the company’s brand has a recall and promises a “trouble-free product with good after-sales service.”

In fact, the rise of the Indian brands, which collectively hold around 15-17 per cent of the market, according to estimates, is a major defining trend of the Indian market in the last few years. What works for them is “proximity to the market, product quality, aftersales service capabilities and the fact that they have fire in their belly. They also introduced more simplicity in the trade,” says Pankaj Mohindroo, National President of Indian Cellular Association.

It is a competitive market in this business. Spice Mobile, which plays in the Rs 2,000-6,000 range, believes in providing the highest value in this segment. “We are not the cheapest, but we provide more value in terms of features or content,” says Payal Gaba, National Head, Marketing, Spice Mobile. The company, which entered into the handset business four years ago, believes consistency of product launches catering to the Indian customer (it averages two products a month), along with value for money and service capabilities, gives it the edge. 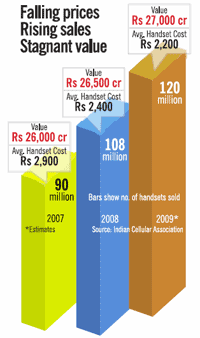 Of course, the Indian companies are using mobiles manufactured in China, South Korea or Taiwan for their brands. However, the unbranded Chinese phones have, in the last six months, seen their market share plummet by more than half (around 9 per cent now). Reason: consumers having quality issues and the security agencies raising alarms about the traceability of such phones. All said, the competition has driven the handset prices lower.

Though the margins in the business are no more than 2 to 5 per cent, for retailers like the Essar Group’s handset retail chain, the MobileStore, they are enticing enough to launch their own private label for handsets.

The volumes are undoubtedly tempting. In 2008, India added 113 million subscribers. But the competition makes for killing fields with a few upsets along the way. Motorola and Sony Ericsson are a case in point. Nokia, however, with its range of models straddling all price points, remains the leader of the market by a wide margin. Yet, there is enough space for others to jostle around.