The Rajus’ fascination with real estate might have strangled the golden goose that was Satyam.

This is a space in which we have operated for longer than the IT space itself and we had a fairly good idea about the opportunities in this space.

B. Ramalinga Raju, in the conference call on December 16, 2008 to announce the acquisition of 100 per cent stake in Maytas Properties and 51 per cent in Maytas Infra by Satyam. 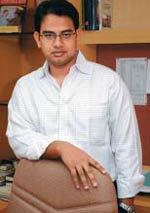 Come unsCome unstuck: Maytas’ B. Teja Rajutuck
Despite building one of the world’s most respected IT services firm, the Rajus clearly could never shake off their roots. Three years before they set up Satyam Computer Services, its promoters had set up Satyam Construction in 1984. In 1998, that company was rechristened Maytas Infra.

Later, in 2005, Maytas Properties was founded. Investigations reveal, however, that it is not just the two companies but that a host of companies— 23 according to some reports—were floated under the Maytas umbrella. Many of these look like property companies.

The Rajus’ accumulated land holdings, estimated at around 7,000 acres—held by the Maytas firms— lends credence to the theory that Satyam was being flogged to fund the land-hungry family’s real estate acquisition binge.

Maytas Properties is into development of urban infrastructure such as master-planned integrated townships, special economic zones, hospitality, retail and entertainment businesses. It has a land bank of around 6,800 acres. Questions are now being asked on the sources of funds for acquiring these lands and whether there was any nexus with politicians. Says E. A. S. Sarma, former Secretary, Economic Affairs, Government of India, and a retired IAS officer: “The way valuable chunks of land have been doled out to Satyam and Maytas violates the law of the land; and the way in which project after project has been awarded to Maytas shows there could be a close nexus between the promoters and the political leadership. We have been questioning these deals but the officials and the politicians have chosen to remain indifferent.”

Last fortnight, Andhra Pradesh Chief Minister Y.S. Rajasekhara Reddy said the state has taken up a review of the public projects being implemented by Maytas, either individually or as part of a consortium.

B. Teja Raju, CEO of Maytas Infra, was one the few “Young Entrepreneurs” who met the then US President George W. Bush when he last visited India. The Master’s in Electronic Commerce from Carnegie Mellon University recently told BT: “Our order book today stands at around Rs 11,000 crore in the construction space and in the BOT space; we are today involved in projects worth around Rs 20,000 crore.” That order book appears likely to gather dust for some time to come.

When your boss does you in