A clutch of new players is marking its presence in the crowded telecom space. Although, they all are aware of of the gigantic size of the established players and know that just innovation may not work when the big players fight back, they are dreaming of getting blockbuster user bases. Tejeesh N.S. Behl and Anusha Subramanian report.

It’s a dog-fight in the making, and one that will, in all probability, end in a whirlwind of consolidation. But that’s in the future. For now, each of the new telecom service providers entering India’s burgeoning market has dreams of getting blockbuster user bases.

“The current teledensity in India is around 29 per cent, and given a population size of a billion-plus, there is a large section of the country waiting to be tapped. We will grow the pie, create new markets and capture a sizeable chunk,” asserts Vsevolod Rozanov, President & CEO, Sistema Shyam TeleServices (SSTL), whose Rainbow (now MTS) brand is present in Rajasthan, Tamil Nadu and Kerala. Vsevolod Rozanov
Rozanov’s confidence is not unique and is shared by other entrants—among them Telenor and Swan-Etisalat. This is a tad puzzling given the late entry the new players are making, with the subscriber base already over 375 million. Among the established players, Bharti Airtel leads with over 91 million subscribers, followed by Reliance Communications (RCom) at over 69 million and Vodafone with nearly 66 million. Naturally then, while price undercutting will feature prominently, innovative pricing is what these operators are doing to attract users.

MTS, for instance, offers a “millionaire” scheme with a million minutes of talk time for Rs 499 valid for 20 years. Of course, there are caveats—a per day talk time limit of 150 minutes and a Rs 200 top-up every six months. Similarly, Loop Mobile, formerly BPL Mobile, is offering students a special package that allows them to talk to up to 10 friends at 20 paise per minute. RCom, which has recently rolled out its GSM services, is offering a lifetime pre-paid card for Rs 49. So far the cheapest pre-paid card in this category was Bharti Airtel’s Rs 99 one.

Most of the new operators are aware of the gigantic size of the established players and know that just undercutting or innovation may not work when the big players fight back. Even the rural market, which is where most new entrants hope the growth will come from, will see strong contests, with Bharti Airtel and Idea Cellular already driving deep into the hinterland with special pricing and value-add services, such as English language tutorials, weather forecasts and local wholesale market commodity prices.

“I believe the present overall mobile subscriber base is just the tip of the iceberg—rural markets, with a tele-density of just over 12 per cent, offer a huge potential,” observes Rozanov. And while the average revenue per user may be small, growth will be driven by the sheer volumes, he feels. Of course, Rozanov’s strategy of targeting a relatively new market as a player starting from scratch is understandable as it would be easier to build base in a new market than an existing, highly competitive one. India’s tele-density is expected to nearly double over the next four years, with about 700 million subscribers.

Others, like RCom, which is a leader in the CDMA segment and has now moved into GSM, are hedging their bets between urban and rural consumers. “For us, growth can come from both rural and urban markets, unlike most new players who are now targeting the semi-urban and rural areas. We have all the advantages of an existing network and cell towers, sales and distribution infrastructure as also billing and customer service infrastructure,” points out S.P. Shukla, President (Wireless Business), RCom.

Shukla asserts their GSM services are currently available across 20,000 towns and 400,000 villages. Another CDMA player, Tata Teleservices, which is also planning a rollout in the GSM space, is banking on mobile number portability to come into effect later this year to poach customers from other service providers, by holding out its better network connectivity. 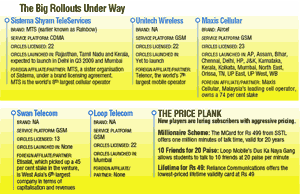 Click here to Enlarge
Aircel, which had predominantly been a regional player present in Tamil Nadu till it was acquired by Malaysia’s Maxis Cellular, is also planning an aggressive rollout in all the 22 telecom circles for which it has been granted licences. Its buildup strategy, though, will focus more on services than special pricing, as evident from its high-pitch advertising campaign. “We are focussing on data services as our differentiator in the market. In Malaysia, we get almost a third of our revenues from data and allied non-voice services and I feel India has massive potential over here,” says Sandip Das, CEO, Maxis Cellular. According to him, there is no one-size-fits-all approach with services in India, as many of them have not even been developed as yet.

Of course, many of the services on offer by existing and new telecom players are already par for the course—value-added services in the areas of entertainment and music, offering socially relevant messages in conjunction with state governments, such as the ongoing Mumbai Traffic Police drive with Loop Mobile against drinking and driving, voice, hi-speed data and video downloads and 3G ready networks.

In the telecom jungle out there, that could ensure a free-for-all among the operators as they push for volumes by offering innovative sops and schemes— not bad if you are a consumer waiting for the dawn of a mobile-enabled world.