Ramalinga Raju began his entrepreneurial journey in software way back in 1987. He was a meticulous strategist who was fuelled by a burning desire to make it big. He didn’t know where and when to stop. E. Kumar Sharma reports. 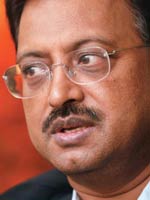 B. Ramalinga Raju
It is ironic that it all began by spinning a yarn. The Satyam Group, when Byrraju Ramalinga Raju began his entrepreneurial journey in software way back in 1987, was a motley group of companies. There was Sree Satyam Spinning & Weaving Mills, set up in 1982; Satyam Constructions was born in 1984 (renamed Maytas in 1998); Satyam Impex (exporter of shoe uppers); Satyam Homes (building residential apartments); and Oceanic Farms (into aquaculture). While these businesses caught the interest of the Raju family (the three Raju brothers and their families), Ramalinga Raju opted to be different. Charmed more by cyberspace than spindles, he once told this correspondent that he had set up Satyam Computer Services in 1987, as IT was his “hobby”.

Over the years, Satyam shed most of its other businesses, except construction, which we know today as Maytas (Satyam written in reverse). Raju was evidently proving to be a man who took his hobby quite seriously and made it seem almost a well-planned venture.

In five years of its listing—by 1995—Satyam Computer began attracting attention. It had posted a 122-fold rise in net profit on a topline that had grown over 20-fold since incorporation. Within 10 years, the soft-spoken and shy USreturned son of a successful agriculturist (Raju’s father Byrraju Satyanarayana Raju was a grape farmer) metamorphosed Satyam into one of the fastest-growing companies in India. In 14 years, it got listed on the New York Stock Exchange (NYSE) and subsequently staked claim to join the billiondollar club by 2006. A touchstone on this road was his e-commerce foray with Satyam Infoway (SIFY).

Raju was truly on his way. Those who have known him since his early entrepreneurial days (but today do not wish to be identified and “hurt Raju with their comments”) say he was always ambitious. Way back in the mid-90s, he would tell his employees—then just a few hundred—that the company would need to aim at touching a figure of 10,000 people by year 2000.


And it was not just the company that scaled new heights. Raju himself reached the high table when former US President Bill Clinton visited Hyderabad; Raju was among the select few invited to share the podium with Clinton and then Chief Minister N. Chandrababu Naidu, with the likes of Ratan Tata in the audience.

So, what was it in Raju’s DNA that made him script a Rs 7,000-crore fraud? Those who have worked closely with this Ohio University B-school graduate and a Harvard alumnus say Raju has all along been a meticulous planner and one who thought long-term in all his decisions. Take the composition of the Satyam board: Until the developments in late December, the company had people with an impeccable track record on the board. An old associate of Raju says: “He invests a lot of time in building relationships. For instance, he knew Krishna Palepu for 10 years before getting him to join the Satyam board. Similarly, he knew T.R. Prasad for 20-25 years and also knew M. Rammohan Rao of ISB and Vinod Dham for many years.” Even when hiring key people, he would always spend time to get to know them. The famous NASSCOM President, the late Dewang Mehta, had told BT: “Raju is a strategist and has an ability to take risks and move at a fast pace.”

Raju, the skilful networker, was also known to be politically-savvy. He was as comfortable sharing the dais with TDP supremo and former Andhra Pradesh CM N. Chandrababu Naidu as he was when recently launching the online edition of incumbent CM Y.S. Rajasekhara Reddy’s son’s newspaper, Sakshi. He would typically talk to them about big projects like the creation of a million jobs. Says Rajasekhara Reddy: “He used to come up with some really innovative ideas like that of EMRI or the 108 ambulance service (108 replicates the US’s 911 emergency service; it began with initial funding from Satyam).”

Either by design or by default, Raju has had little randomness in his working. He was focussed and hardworking. People who know him say he, perhaps, slept for no more than five hours and on days began his first conference call with colleagues in the US at 6 a.m. He almost never slept on the 15-hour flights that he took frequently to the US. He would spend the time reading management and technology books and taking copious notes on the bunch of research index cards he would carry in his coat pocket all the time.

A Satyam employee points out that Vaastu, the traditional Indian science of construction, perhaps, did not favour Raju. His new corporate office had the Chairman sitting in a portion of the building that was suspended in the air and there was a water fountain below. The implication, he explains: “It is considered bad because such structures make you lose touch with the elements!”