The tortoise that came in from the Cold

Unassuming, minimally-dressed, soft-spoken, and notoriously lowprofile, it's easy for Noel Tata to get lost in a crowd. If you had to do a SWOT on the Trent CEO, count such anonymity as his biggest strength. He can stroll into his retailing formats, take in customer behaviour and accordingly make changes in his merchandising strategy. More excitingly, he can stride into rivals' retailing formats, figure what they're doing right, what they're doing wrong, and accordingly get back to his drawing board.

Year: 2008. Trent decides to flag off its first hypermarket in Bangalore, in Koramangala. The location: Some 500 yards away from where a competitor has set up a similar format. This, according to the industry buzz, is one of the rival's star performers. Noel decides to pay a visit. He walks in and quickly soaks up its advantages-the location is immaculate, and every product is stacked in a manner that pleases the eye. 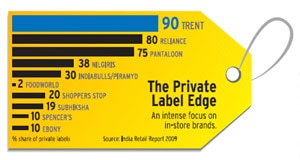 Click here to Enlarge
There's little Trent's Star Bazaar can offer that isn't already stocked in this bazaar. It's outside the hypermarket, however, that Tata sees his opportunity. The competitor's hypermarket has barely 30 parking spaces. When Trent launches its Star Bazaar in Koramangala, ample parking-some 300 slots-becomes one of its biggest differentiators. Lesson from Noel: "Productwise you can differentiate in quality of vegetables and fruits, or meat or fish. But in general grocery you are more or less selling the same product. What differentiates your business is customer service, ambience, parking-the ease and the convenience of shopping."

Another example: Noel walks into another hypermarket, this one also in Bangalore-a four-storied one, to boot. One of the first things he notices is that there are no escalators, just two lifts. He also notices that shoppers are picking up a trolley on the ground floor, shopping about-and then leaving their trolleys behind as they ascend to the floors. That's another lesson Noel took home: Every Star Bazaar would be embellished with escalators and travelators.

Better late than half-baked. That's the maxim of Noel Tata, who with just five hypermarkets appears decidedly the straggler in the part of the segment of organised retailing that matters the most-foods & groceries. According to the India Retail Report 2009 put out by Images Multimedia, a retail intelligence unit, food & grocery accounted for close to 60 per cent of the overall retail pie in 2007, and was valued at just under Rs 800,000 crore. As a part of organised retail, food & grocery is still small, at Rs 9,000 crore or 11.5 per cent of the pie. But it's clearly this segment that will separate the men from boys in Indian organised retail.

That's a fact not lost on Noel. Yet, with just a handful of hypermarkets, as against Kishore Biyani's 120 Big Bazaars, Mukesh Ambani's 600 Reliance Fresh stores, and Kumar Mangalam Birla's 600-odd More supermarkets, you can't be blamed for thinking that Trent is out of the foods & grocery race. That would also explain why in revenue terms Trent lags most other retailers. 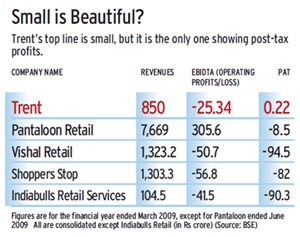 Click here to Enlarge
Such an evident lack of scale might bother some Trent watchers (perhaps even a few at Bombay House). But Noel isn't fazed by the fact that: One, his top line growth has been slow; two, that he lacks scale (in foods & grocery); and, three, that he missed the first-mover advantage in hypermarkets.

"Our experience has shown that scale alone does not bring profitability. We also believe that, in our segments, there does not exist any first-mover advantage. In foods & grocery, if you are not first, you have the opportunity to analyse your competitor's offerings, and their strengths and weaknesses," says Noel.

Analysts also point out that the recent downturn has been a kind of reality check for retailers. Those with the huge top lines are also losing big money (Reliance and Aditya Birla Retail, to name just two), and stability of their respective formats is still a while away. "There is a new realism in Indian retailing. Food retailing is a tough, lowmargin business and it is taking its toll. We (Tesco) have arrived at the right time. The potential is huge and it is still very early days yet," says Gordon Reid, COO, Star Bazaar, who represents Trent's partner in hypermarkets, Tesco, the UK retailing giant.

Yet, one could always argue: Why didn't Trent begin its hypermarket venture earlier? For an answer to that, let's start at the very beginning.

Circa 1995: Cosmetics major Lakme, a fully-owned Tata subsidiary, entered into a 50:50 joint venture with Hindustan Unilever (Hindustan Lever at that time). This eventually led to a complete sell-out two years later. By 1996, the Tatas called in McKinsey to identify new opportunities for growth for Lakme. Retail was one of them. Simone Tata, then Chairman of Lakme (and mother of Noel) took the call that retail would be the next growth engine for Lakme. Two months after that decision was taken, an investment banker came with an opportunity-Littlewoods, a UK-based fashion retailer operating one store in Bangalore, wanted to exit India and sell its India business.

By March 1998, Simone Tata and her top brass closed the deal to purchase Littlewoods. Trent was created by renaming a subsidiary (Lakme Exports). Two months after the acquisition, Noel was drafted in from Tata International (then Tata Exports). Littlewoods was renamed Westside. Trent was on its way. "Though I looked at various diversifications, none (but for retailing) appealed to me as they did not fit my two criteria: an industry of the future; and a consumer goods business with a bent towards women. Retailing filled both criteria," says Simone Tata.

So if Trent decided to start with fashion, it was largely a function of the acquisition that came its way. But then there was barely an organised format in foods & grocery at that time-Spencer's had a format in Chennai and Biyani's retail empire was restricted to a couple of Pantaloon's stores. Yet, Biyani began his blitz of Big Bazaars in 2001, and Trent could flag off its first Star Bazaar only by 2004; since then it's been able to put up only four hypermarkets-as against Biyani's 116. Noel acknowledges that "the second and third store that we signed were each delayed by more than 18 months, which delayed the optimisation of the model." He also adds that growth slowed down over the past couple of years, when real estate prices shot up and, consequently signing of properties came to a virtual standstill.

Yet, there's no denying that Trent's growth has been measured, cautious and conservative. Just one indicator of that is the investment made till date-Rs 480 crore (including capital expenditure and working capital). Biyani, on the other hand, has invested at least 10 times that amount in his retail formats. Scale has clearly been sacrificed, but what's making Noel look like a bit of a guru these days is his focus on profitability against the backdrop of an economic slowdown. Trent is the only major organised retailer to have avoided the red ink in the last fiscal (see Small is Beautiful?). Clearly, the decision to be profitable at the store level before setting up the next one looks like a masterstroke in a tough environment.

Along with a focus on profitability, Noel's other early stroke of genius was the decision to go the private label route (as against multi-brands, a la Shoppers Stop). The advantages of private labels are two-fold: One, the conversion rate is higher (although footfalls into such stores are lower); two, margins are higher than in multibrand stores. "You have a lower turnover with a higher margin in private label. And margins are what pay the bills," quips Noel.

When Noel decreed in the late '90s that Westside would go the private label route, he was distinctly in a minority. But he held his ground. That Littlewoods was 70 per cent private label at the time of acquisition made it somewhat easier. But there were other triggers for developing one's own brand. "When reviewing the portfolio of products that we intended to sell, we found that only 30 per cent of the products had national brands whilst 70 per cent had regional or no brands at all. There appeared therefore clearly an opportunity to build a national brand," says Noel. He adds that over the past 30 years in the US, it's been the private label retailers like GAP and Target that have expanded even as department stores have struggled.

However, whilst Noel would like to consider himself the pioneer of sorts in private label, there's another retailer who's keen to steal that thunder. "We were the ones to start private brands and today 80 per cent of Pantaloons is private brands. In Big Bazaar, 75 per cent of the apparels are private brands. In this business that is the way you make money," points out Biyani whose Future Group owns Pantaloons and Big Bazaar. Yet, in terms of share of private labels, Trent is right up there with 90 per cent, according to Images' India Retail Report 2009.

Noel says he's focussed on being the best- rather than the biggest-yet he realises that size does matter if one has to be counted amongst the country's elite retailers. Trent hopes to have 50 hypermarkets in five years, which should generate a turnover of Rs 3,000 crore. Eventually-over a couple of decades-he foresees Trent having 300-odd Star Bazaars, and generating over Rs 20,000 crore. "There's so much more that needs to be done at Trent," sighs the MD. The billion-dollar question, of course, is whether the wise men at Bombay House decide to let him continue doing what he does best in the years ahead or feel the time is nigh for Noel to embark on a more critical mission within the group.