Though the decade began with a bug scare and ended with a scandal and a slowdown, positive events were plentiful through the first 10 years of 21st century. BT identifies 10 milestone events, and what they meant.

The Y2K Blessing: The Scare That Redefined Indian IT
The whole world feared a catastrophe that day. The fears proved unwarranted. Rather, it proved a blessing in disguise as India's fledgling IT industry's technical capabilities successfully helped companies across the world beat the Y2K bug.

Y2K proved a blessing in disguise as India's fledging IT industry helped the world beat it.
Prior to Y2K (till about 1996-97), Indian IT companies were predominantly engaged in filling specific skill shortages at the client's end by sending qualified people to work for them, otherwise referred to as body shopping. Y2K brought about a fundamental shift in the way IT companies in India operated. First, a large part of the Y2K work was shifted to India for re-writing the software code (thus laying the foundation for what came to be known later as offshoring). Also, the companies had to scale up rapidly and work in a time-bound manner.

"Y2K was a defining moment. It was an inflection point for the Indian IT industry as it helped in establishing the industry's strong credentials, demonstrating its ability to scale up operations with quality and execute against deadlines," says R. Chandrasekaran, President and Managing Director, Global Delivery, Cognizant. It also helped IT companies expand their customer base across industries, opening up opportunities for an array of application-led services.

Y2K clearly jump-started the IT industry's growth. Its exports have since jumped by 12 times to $47 billion. Infosys, Wipro, Tata Consultancy Services and Cognizant have grown to become global players—proving that "Made in India" also stands for quality.

Tata's Acquisition of Tetley: Started India Inc.'s Big-ticket Global Buys
Tata Tea's buyout of Tetley Tea, UK, for $431.3 million on February 27, 2000, was by far the largest cross-border acquisition of an international brand by India Inc. then and also the first instance of an Indian company resorting to a leveraged buyout to acquire an entity which was twice its size. It was also a case study in perseverance. 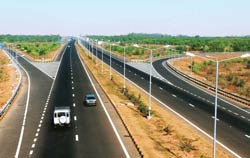 The Government has approved six-laning of 6,500 km of highways
Tata Tea had attempted to buy the Tetley Group from Allied Domecq in 1995. But at that time, lack of financing prevented the acquisition and Tetley was snapped up by Schroders Private Equity Fund. Tata Tea did not give up. It kept working on innovative funding options and when Schroders began looking for a buyer in 1999, Tata Tea was ready with a leveraged buyout model to fund the acquisition.

"In a way it was a business model innovation. A funding model practised elsewhere was picked up and fitted into the Indian context in a manner that offered the least risk," says R. Gopalakrishnan, Executive Director, Tata Sons, citing stiff foreign exchange regulations that the country had then.

PSBs' day in the Sun

From farm to firm to fork