'There is so much more to do at Trent'

Noel N. Tata has been one of the most reclusive business honchos in India. And he insists that it's his nature that makes him that way-and not a desire to keep a low profile. To our pleasant surprise, we found Tata an extremely engaging conversationalist, as he went about debunking common theories and wisdom about organised retail- a business he lives and breathes. Excerpts from his first full-length interview:

BT: It's 10 years now that you have been with Trent. What do you see yourself doing in the future?

NT: There is so much more to do now at Trent that there is little time to think about anything else. Usually, I am on a six-and-a-half-day week. The rest is time left for family and often if I have to visit a place like Nashik or Pune to look at a store, a Sunday is the best day to go for it. So, I have little time left after that. And retail is a detailed business-you cannot get away from it. You have to keep revisiting your stores. Even on a holiday I might see a little shop somewhere doing something special and I start thinking-now we can do that, too. This is a business I have a passion for and I feel I am lucky to have had the opportunity to work in this business. Each of the top five players in hypermarkets can build a business worth more than Rs 20,000 crore in the next 20 years.

BT: So, do you feel you have done enough with Trent or you could have moved faster?

NT: Our aim has always been profitable growth. We have pursued growth with profits rather than growth for the sake of it. You must also remember that we were a publicly listed company when we started, compared to many others who were or still are private companies in their growth phase. We had thousands of shareholders. We have never missed a dividend in all these years. 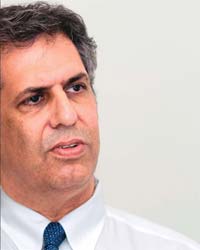 BT: Do you think some of the first movers have inherent advantages because they built their stores when real estate prices were really low?

NT: I think on that particular point, in terms of real estate prices, you are right. Having said that, our view is that if you are in fashion, you are only as good as your last collection. You have to be constantly delivering the right fashion. Being first and then not keeping it up in terms of collections won't keep you in business for a long time. On the hypermarkets side, if you are not first and if you are coming second or third or fourth, you have the ability to see what the competition has done, analyse their weaknesses and develop stores that are superior. I am not so fussed about first mover advantage.

BT: But if your competition has 100 hypermarkets and you have 12, then he can call the shots?

NT: It's not that straightforward. Even at 100 hypermarkets, you will have less than 1 per cent of the large vendors' turnover. Scale alone does not bring profitability. If you have six or eight or 10 players all growing-they are all getting scale as well. If one of them decides that I am going to pass on my better margin to the customer, what do you do? You have to do the same and then that margin would disappear. Along with scale, customer service, location, pricing, product mix, availability are extremely important. If a customer comes with 100 items to buy and he only walks away with 60, he won't come back.

NT: At the time Croma was envisaged, we had our hands full with our own expansions. We had expansion plans for Landmark (books and music), expansion plans for hypermarkets as well as for Westside. Also, consumer durables (which is what Croma retails) is a completely different business. So, it was the right decision (to have Croma outside Trent). It possibly wouldn't have grown as fast as it has if Trent had tried to start it as another retail format. We are doing something else in the lifestyle area (with Westside). My sense is that it's only in India that retail is considered one industry. Nowhere in the world is the gamut of retail considered one industry. You don't treat manufacturing as one industry. You have cement, or automobiles or steel, each having its own competencies, each having its own quirks… so why does media or analysts treat retail as one industry? Also, the DNA of an organisation selling luxury is very different from the DNA of an organisation selling value.

BT: But your pace of expansion would seem slow…

NT: Our view is that retail, which appears on the surface to be a simple business, in reality is not. It is a business in which details are extremely important, where the front end needs to treat the customer as an individual even as the back end needs to be able to procure in bulk and get economies of scale… We grow our formats in stages. In Stage I, we open a pilot store to check customer reaction. In Stage II, we open 3-10 more stores to check for location advantage/disadvantage and for further fine-tuning to get a line of sight to profitability. Only once we are confident that the format can deliver profitability do we go in for further expansion.