Why equality is better for all

There is every reason to believe that India's income inequality, already above European levels, is a foretaste of a winner-take-all society to come.
Tim Harford | Print Edition: Jan 19, 2014 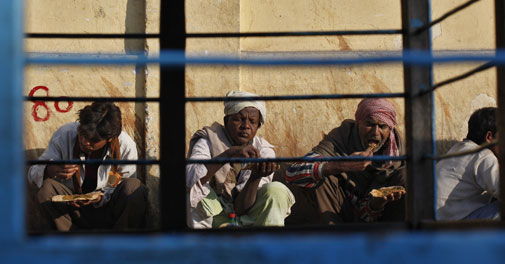 Tim Harford
Inequality has become a hot topic, but what's really going on? Let's start by looking at rich countries. The figures vary depending on who is measuring and when, but France's Gini coefficient (a statistical measure used to assess income distribution in a country) is around 33 per cent, Finland's 27 per cent. It is 34 per cent in the UK and 45 per cent in the US. To put this in perspective, a Gini of zero implies total equality of income, and a Gini of 100 per cent means that one person has all the dough.

Let's move to Brazil, China and India, which are often lumped together, especially by European and American analysts, but of course are hugely different in many ways.

Improve social programmes, make them as generous as resources allow, and target them better. The stories I'm told are of waste, duplication and fraud

Brazil is a notoriously unequal society, so one might expect it to have a high Gini coefficient. The CIA's World Factbook reported that Brazil's Gini coefficient was 61 per cent in 1998 - the sort of extreme inequality that we might expect, given the country's reputation. But here's the thing: Brazil's Gini is now down to 52 per cent. That's still high but it's a big fall, a quarter of the way to becoming ultra-egalitarian Finland in just 15 years. It shows that in the right circumstances, inequality can be tackled: Lula da Silva, Brazil's president from 2003 to 2010, was regarded as a revolutionary firebrand when elected, but turned into a pragmatist who was happy to court international investment, yet was keen to redistribute some of the rewards of Brazil's commodity boom.

China is still ostensibly a communist country, but it is rapidly taking over from Brazil as the poster child for income contrasts. The CIA Factbook puts the Gini coefficient there at 48 per cent. That is higher than the level in the US, and given that China is still much poorer than the US, such income inequality implies tremendous hardship for poorer families. A more recent study found a Gini coefficient of 61, which, if true, is pretty serious. No wonder China's leaders are nervous about social unrest.

Finally, India. India's Gini coefficient seems stable in the high 30s. Notorious examples of glaring inequality, such as Mukesh Ambani's billion-dollar house in Mumbai turn out to be the exceptions, not the rule.

Inequality Possibility Frontier
Should we conclude that all is well in India, then? Not necessarily. The latest concept in inequality economics is the "inequality possibility frontier". Here's a way to think about it: in a subsistence society, significant inequality is impossible: if resources are unevenly distributed, people will starve. The richer a country gets, the greater the proportion of resources that could go to a small number of people, and the more unequal it could become. There's every reason to believe that India's income inequality, already above European levels, is a foretaste of a winner-take-all society to come.

But Indian policymakers must not panic. Consider the attitude summed up by China's first great economic reformist, Deng Xiaoping, who took power in 1978 following the end of the Maoist era. One of his much-quoted maxims was "Rang yi bu fen ren xian fu qi lai" (Let some people get rich first).

Deng had a point. Economic growth isn't a steady, automatic accretion of wealth. It comes from replacing old ways of doing things with something new. Such creative destruction is likely to create inequalities in the short term. China's growth model has been experimental, loosening different restrictions on different industries in different parts of the country, and creating globalisation-friendly industrial zones on the coast. It is almost inevitable that such experiments, if successful, will produce winners and losers. (If unsuccessful, of course, they produce only losers.) Not every place can develop at the same rate. India is going to have to embrace similar experiments and inevitably, inequality will be the result. What, then, is the right response?

The more unequal the society that surrounds us, the higher the stakes: the more we have to invest in giving our children that tiny extra advantage

The first is to give Indian business some space to grow. The World Bank's Doing Business project, which measures regulatory burdens, places India 134th among 189 economies, and slipping in the rankings. Obviously, the rule of law is necessary, and businesses cannot be entirely untouched by government, but there is tremendous room for improvement in making it simpler to set up a legal business, register property or get a construction permit in India. It is hardly a surprise that India's growth industries have been those that were hard for government officials to even imagine existing. If you can't be imagined, you can fly under the radar until you're big enough to defend yourself.

The second is to focus on primary education to help Indians take advantage of new economic opportunity. India's best universities are legendary, but its primary and secondary education does not enjoy the same glowing reputation.

The third element is to improve social programmes, make them as generous as resources allow and - importantly - to target them better. I am no expert on the Indian welfare state, but the stories I am told are of waste, duplication and fraud. This is a triple tragedy: people who desperately need help aren't getting it, the state is spending money it cannot afford on people who may need no help at all, and the welfare state, which should be a bedrock of any developed economy, is discredited.

Role of Cash Transfers
I'm fascinated by the possibilities of direct cash transfers . Recent trials of cash handouts to low-income entrepreneurs in Sri Lanka after the 2004 tsunami, poor women in post-conflict Uganda, and even homeless petty criminals in Liberia, suggest good results. At a bare minimum, the money tends to be spent on useful consumption: food and clothes rather than alcohol and drugs. In many cases, it is used to buy investment goods with good rates of return. In most cases, the most effective welfare programme is going to be not free rice or milk, but cash. The question, then, is how to distribute that cash properly in India. Mobile phones are making electronic transfers feasible, but a fundamental issue is identifying the correct recipient. It's encouraging to see India pioneering an ID system for the entire population, the scale and ambition of which is unprecedented. Well-wishers across the world are watching and hoping it will work.

Of course, some people ask why inequality matters. Who cares if the super-rich get super-richer, as long as the poorest are enjoying some increase in living standards too? I have a degree of sympathy with this view: certainly I don't think it's intrinsically harmful for Mukesh Ambani to get a little richer, as long as it is at nobody else's expense. My priority is poverty rather than inequality.

But that said, I don't think we can dismiss inequality entirely. For one thing, the money now accruing to the richest members of societies across the world is not trivial. The vast majority of income gains in the US, for instance, have gone to the richest, leaving most Americans suffering limited income growth for the last 30 years or so. That's not to say that the rich "stole" the money - economic growth doesn't work like that. But it does make the point that the sums involved are substantial. It's not just a matter of envy.

Inequality Can Be Costly
Research suggests inequality has harmful effects on crime, mental health and growth. I don't find it totally convincing, but one has to consider it a risk. Some intriguing recent research from the IMF suggests that episodes of strong growth are more likely to end quickly in highly unequal societies. One possible explanation is the political economy of highly unequal states. The more unequal a society, the more resources an oligarchic elite can deploy to seize political control and defend its wealth. Oligarchs don't like free markets. They like barriers to entry. Even the relatively saintly Bill Gates, who has devoted much of his fortune to economic development, built his billions on the back of his (perfectly legal) monopoly of the Windows system, backed up by global intellectual property law.

Many other plutocrats have less laudable intentions and rather starker ways to maintain their wealth. Almost one in 10 of China's richest 1,000 people sit in the National People's Congress - a body of almost 3,000 lawmakers. Their average net worth is four times that of the richest politicians in the US Congress, despite the fact that the US itself is a far wealthier nation. If the US is subject to too much influence from plutocrats, then the situation in China looks even worse.

At the very least, one must recognise that there's likely to be some degree of redistribution from the rich to the poor that will improve welfare as a whole.

A final point: inequality isn't just a case of the super-rich versus the super-poor. It has its impact on the middle classes too, and on the way we conduct ourselves. I consider myself middle-class and I expect most people reading this article do too, so I hope they empathise with my position. The more unequal the society that surrounds us, the higher the stakes: the more we have to invest in giving our children that tiny extra advantage, or to defend ourselves from crime.

We find ourselves devoting disproportionate effort to choosing the perfect neighbourhood, the perfect school or tutor. More equal societies - we look with admiration at Denmark, Finland and Sweden - have lower stakes. Middle-class families relax, knowing that any school is likely to be good, and that the gap between the highest achiever and the also-ran is not great. The tragedy of inequality for the poor is obvious, but inequality is also a prison for the middle classes too. No society can be truly prosperous unless people feel that their economic lives are secure. That is something to which India - and every other country - should aspire.

(Tim Harford is an economist, journalist, broadcaster, and the author of The Undercover Economist)

(As told to Vivek Kaul)

Tourism industry on the path to recovery in Kashmir