Strategies to fight the downturn can be effective only if they are communicated well to the employees. Here’s how a few companies are doing it. 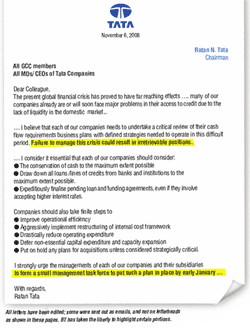 Click here to Enlarge
So the last quarter was terrible and the numbers in front of you indicate a sequel. You get no consolation from the fact that your rivals are also in the dumps. And to think that you had been recruiting at this time last year and talking of national rollouts! When you went to the cafeteria at lunch time yesterday, you could sense people avoiding eye contact, conversations dying down… Everybody seems to be worried about their jobs… especially after two dozen people lost their jobs at the company next door.

You are sure you have to trim payroll, skip increments, take away the company car and cut other perks—and not because these people are bad at their work. You are wondering how to communicate. Your forte has been talking vision and driving teams, not explaining downturns. Who can help you draft a frank letter? Not the HR boss—too full of jargon. Let’s see…Yes! The Finance Director! He is a veteran and knows his words. 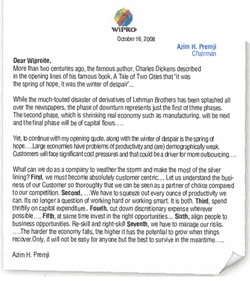 Click here to Enlarge
Relax: You are not alone: From reclusive bosses like Tata Group Chairman Ratan Tata to Future Group’s loquacious Kishore Biyani, India Inc. CEOs are communicating down. “More than any other time, now is the time to have more upfront, active and outright communication,” says Future’s Founder and Group CEO Biyani, who otherwise writes a weekly “Monday Musings” for all his employees.

Talk—keep the flag flying
For companies that are stars in their field, it is vital to keep the troops motivated during a downturn. Demotivated staff can cause a company to spiral downwards to doom—and make it difficult to catch up when the market looks up. Proper communication makes employees feel empowered and respected—the two keys to motivation. The modes and sources of communication can, of course, vary.

Thus, at Chennai-based TVS Motors, Chairman Venu Srinivasan preferred a layered approach. He initially met his direct reports and apprised them of the situation and the steps that the company intended to take. This message was then given out as personalised letter from the office of the Chairman to the managerial cadre. The President and CEO, K.N. Radhakrishan, then addressed the rest. 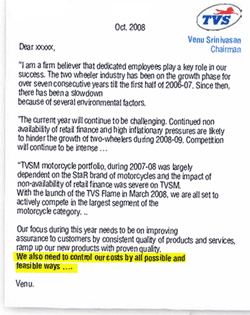 Click here to Enlarge
At Wipro, Azim Premji wrote to all Wiproites directly, listing out seven steps to help them weather the storm. The seven commandments: become absolutely customer-centric, stretch yourself to the hilt, spend thriftly on capital expenditure, cut down discretionary expense, invest in the right opportunities, re-skill and right-skill people and manage your own risks. Wipro also does webcasts where the entire senior team shares its business plans with employees globally. “There’s one common thread across all these initiatives: Apprising employees on the strategy,” says Pratik Kumar, Executive Vice President, HR, Wipro Ltd.

Talk—learn from flashbacks
At Ashok Leyland, it was déjà vu for old-timers, even though the current phase is much worse and more uncertain. The reassurance was needed more by recent entrants, mostly young. The annual interactive communication meetings were altered to address the issue. The forum was used to recall how the company weathered the 1990s recession to emerge even more competitive, its strengths and the long-term potential of the industry. At the same time, it laid out the prospects and measures taken to cut costs and the employees’ role in it.

Managing Director R. Seshasayee addressed three back-to-back hourlong meetings with 600 employees in the canteen. Seshasayee also wrote about the causes, intensity and impact of recession and the strategies in his quarterly letter to employees.

Talk—it’s basic HR routine
When the downturn caught up with Maruti Suzuki India during the festive season of 2008, the company put its communication strategy into top gear, helping change the entire work environment for the better rather than yielding to it. The HR Head S.Y. Siddiqui sat with employees to explain the global crisis. They were also told to go back to basics, to detailing. Without this stress on clear communication, 7,000 people could have 7,000 different perceptions. The same confidence was communicated to the channel partners. MD and CEO Shinzo Nakanishi said in a mail to all staff: “It is encouraging to see whether in times of boom or crisis, we have learnt to make the best of situations at hand.” Kishore Biyani
Talk—even in happy times
Communication is crucial even for companies doing well. Take Max New York Life Insurance. It did a presentation showing that the downturn would not hit it directly, and handed out communications packs to its officers to help them face customer queries.

Says Rajan Kalia, its Executive Vice President & Head, HR: “We held town halls for employees and agent advisors at which the management addressed their concerns and cleared their doubts.” Deep Kalra
Bangalore-based Infosys BPO had one of the best quarters in October-December 2008 in terms of client wins. Sequential growth, too, has been a decent 4 per cent. Yet, some employees seem less confident about their future. The Infy BPO has stepped up the frequency of its meet-yourleader events at its centres in Pune, Gurgaon, Jaipur, Chennai and the Bangalore headquarters.

The business leaders are more forthcoming with the staffers on why they must augment their skills, increase their output and cut superfluous expenses. “...leaders talk about the economy in general and where the businesses are heading. Then they take questions,’’ says K. Raghavendra, Vice President and Head, HR, Infosys BPO. Click here to Enlarge
It is encouraging its BPO staffers to go for higher learning so that they can be deployed elsewhere if needed. As CEO Amitabh Chaudhry put it recently: “I think some of our existing people are finding it tough to move up as our standards become stronger.’’ Infosys BPO has tied up with educational institutions and is offering specific programmes in retail management, banking, financial accounting etc.

Click here to Enlarge
“This will send a strong message that... people who are serious about their career and want to add to their self-worth, will look at initiatives like this and make a difference,’’ says Raghavendra.

Talk—and ask for ideas
When times got tough, travel dotcom Makemytrip.com indulged in brown-bagging. No, this was not a food initiative; it did an experiment called Brown Bags. Employees could anonymously slip in questions addressed to the leadership team. The questions made CEO Deep Kalra realise that employees had the same concerns as employers. Says Kalra, “...trust, openness and desire to share good and bad news helps to align employees.”

Communication is not without its fare share of challenges, though. Says Ambarish Raghuvanshi, CFO and Director, Info Edge (India): “I think companies will get the communication around the harder aspects of their businesses right. These are, for example, the cost-cutting measures, sales efficiencies, etc. The softer aspects of the business are far more difficult to communicate.” Click here to Enlarge
Communication does not have to be a commitment, especially when the future is as uncertain as it is today. So, don’t hold back communicating just because things are not unclear.

Companies that put their cards on the table help employees plan. That’s why Naukri.com CEO and Founder Sanjeev Bikhchandani wrote to his people asking them to be prepared to work harder and to cut costs— and be ready for transfers.

The lesson: when you know you can make a difference and are part of a solution, it can change your mindset completely. The best strategy for managing talent, in good times and bad, remains plain, transparent communication.

—With inputs from N. Madhavan in Chennai and K.R. Balasubramanyam in Bangalore

Job loss: Are you next?