Too Little Too Late

The government has tried to apply balm on realty sector's wounds with sops ahead of the 2019 general elections. But that may not be enough.
Rashmi Pratap | Print Edition: February 24, 2019 There has been a spate in the number of suicides by builders and developers as the real estate sector is reeling under its worst slowdown since 2008. The ongoing liquidity crunch following the crisis in the non-banking finance company (NBFC) sector, combined with high levels of unsold inventory has made the going even tougher for developers.

The Narendra Modi government has tried to apply balm on the wounds through sops in the interim Budget ahead of the 2019 general elections. But it is unlikely that the measures will help heal the sector anytime soon.

"There is a severe liquidity crisis and they have not addressed it at all. The liquidity crisis must be first accepted and then addressed. We need to handle the issue because otherwise Housing for All (by 2022) cannot be achieved," says Niranjan Hiranandani, Co-founder and MD, Hiranandani Group and President of industry body NAREDCO.

What began in mid-2018, with IL&FS failing to repay its commercial dues, has caused a liquidity crisis for the entire NBFC sector. The cost of borrowing for NBFCs has gone up, following which they have increased commercial lending rates by up to 400 basis points (4 per cent), besides freezing loans to builders and developers. This comes at a time when the excess leverage for land accumulation by developers has increased their debt levels to more than Rs 4 lakh crore as of December-end 2017, just a little short of over Rs 4.5 lakh crore debt of the telecom sector. Alongside, ready inventory between 2014 and 2018 has increased 2.5 times. "You cannot increase productivity without addressing liquidity concerns," says Hiranandani.

Various measures announced by the current government to streamline the sector have also had a negative impact on developers. While demonetisation sucked out liquidity, the Real Estate (Regulation and Development Act), or RERA, further led to fiscal tightening. Under RERA, 70 per cent of a project's fund requirements are now put in an escrow account, restricting the developers' ability to manage liquidity. 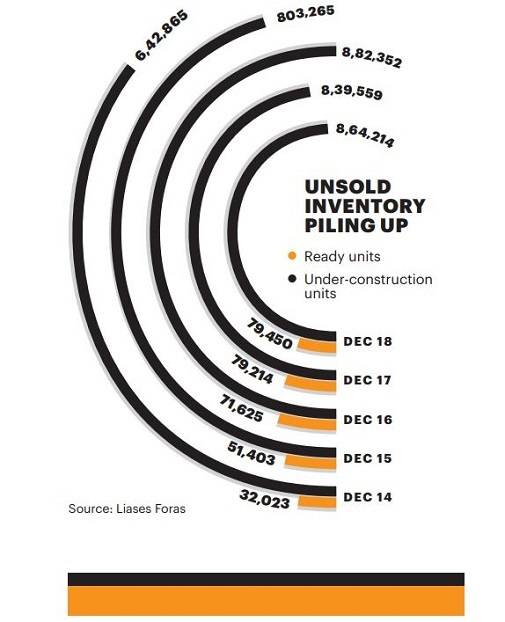 Till now, unsold inventory over one year old was considered stock-in-trade and the builder had to pay notional rent on those units. With unsold inventory levels at over 943,000 across the top eight cities of India, the outgo from builders was huge. "Increasing the exemption on paying notional rent from one to two years will provide respite to builders," says Kapoor.

The steps are in the right direction. "The government is taking the right steps to minimise the risk associated with high levels of unsold residential inventory that could pose a risk to liquidity in the markets affecting both builders and banks," says Joe Verghese, Managing Director, Colliers International India.

The inventory tax meant that while developers were finding it difficult to find takers for under-construction properties, they had to comply with RERA norms and finish the project as per schedule.

But the two-year exemption may not suffice. "Prices come down only when you create surpluses, but here, builders are taxed on surplus inventory. The measure should be totally done away with," says Hiranandani.

Another pain point left unaddressed by the government is the 12 per cent GST on under-construction properties. "Sales in these properties have been declining in the past few years as no GST is charged on the ready ones. Additionally, delay in execution and delivery has kept buyers away. Our data shows contribution of sales in ready properties has gone up from 11 per cent to 27 per cent in the five year period," says Kapoor.

The GST Council is considering a revision in GST. Inventory issues assume significance because cash received from buyers of under-construction properties is a big source of funds for developers. And that source is drying up because buyers are preferring ready-to-move in properties that do not attract the 12 per cent GST.

The government's other booster to the sector is the extension of Section 80-IAB, which allows 100 per cent deduction on profits generated by a developer of affordable housing project, till March 2020. "These are important measures for the recovery and further expansion of residential real estate in the country," says Anshuman Magazine, Chairman and CEO, India, South East Asia, Middle East & Africa, CBRE.

To woo the middle class, the government has relaxed norms for genuine self-occupiers who already have a house and want to buy another one. For self-occupied second homes, where owner's family is living, consumers don't have to pay tax on notional rental income. This is a departure from the earlier practice of it being taxed. If the property is let out, tax deducted at source (TDS) will be up to Rs 2.4 lakh. This limit was Rs 1.8 lakh earlier. "This can attract more investors to buy second homes to earn rental income," says Anuj Puri, Chairman, Anarock Property Consultants. 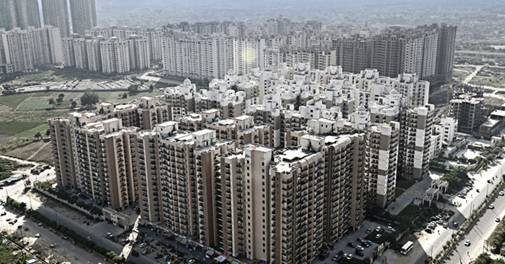 "Along with capital gains exemption for up to two houses, this (the exemption) will allow people to have a diversified portfolio for real estate investment, which will spur demand across the country, including in Tier 2 and Tier 3 cities," says Verghese.

Moreover, capital gains of up to Rs 2 crore generated after selling a property can now be invested to buy two properties. "It is an opportunity for people to upgrade or purchase more property. It will incentivise buyers while avoiding speculators, and give a push to demand," says Kapoor.

While the government has announced measures to win over its voter base, it has not announced any clear roadmap for Housing for All by 2022. The housing deficit in urban areas alone was pegged at 18.76 million units in 2011 and the figure was revised downward to 10 million units by the government in 2017. The Budget sops, however, promote the purchase of second homes instead of incentivising first-time buyers.

According to a CRISIL report, only 1.2 million houses have been constructed out of the 6.3 million sanctioned since June 2015 under the Pradhan Mantri Awas Yojana - Urban. To meet its objective of building 10 million houses, the Centre needs to contribute Rs 1.5 lakh crore till 2022 - a goal that seems impossible given the precarious fiscal scenario.

The announcements may not help the sector come out of the crisis in the next few quarters but they will help the government garner more votes.