At the moment, the future of the smartphone, tablet and Ultrabook seem intertwined, with Windows 8 being the thread that brings them closer. In the Windows 8 environment, all these devices can work on the same OS and this will bring in aspects of convergence and convenience that we have not experienced so far.

ULTRABOOK
Soon, Ultrabooks will start coming with touchscreens and will have magic trackpads to make best use of the new Windows 8 operating system from Microsoft. While these devices will twist and turn so that the screen comes closer to the user, some of them will even be able to transform themselves into tablets by detaching the keyboard.

As displayed at Computex earlier this year, they will also sport face-tracking and eye-tracking features along with voice recognition. The other area where they evolve could be in security with sensors and biometric features expected to be added to top end models.

Seeing the recent trend among Ultrabooks to become fatter, it remains to be seen if new records are set in the sizezero segment. The next big leap in the size race will be to see an Ultrabook with a thickest point of under half an inch - the Acer Aspire S5 has a maximum thickness of 0.59 inches while the Samsung Series 9 is exactly .5 inches, though the latter doesn't like being called an Ultrabook. 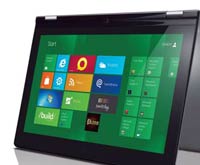 LENOVO IDEAPAD YOGA (Price: $1,199)
Yoga claims to be the first hybrid notebook with a 360-degree flip-and-fold design. Essentially an Ultrabook, this device will transform (or fold) into tablet with a 10-point capacitive touch screen when needed. First reports suggest this 13-incher will cost over $1,999.

ASUS TAICHI (Price: $1300)
Taichi is not flexible as the Yoga, so it will sport a second screen on the back eliminating all need for unnecessary contortion. The Taichi will come in both 11.6 and 13.3 inch screen sizes and will be as thin as Asus's super thin Zenbook. But the dual screen could pose issues of privacy. Prices are expected to be upwards of $1300. 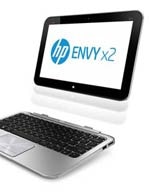 HP ENVY X2 (Price: TBA)
The power of a notebook and the freedom of a tablet, that is the x2's mantra. Its innovative hinge with magnets smoothly guide the tablet into place - just the tablet is 0.71-kg about half the combined weight. The device will have 11.6-inch IPS panel and a 8MP rear camera on the tablet.

TABLETS
A good number of the new tablets will be those that can transform themselves into Ultrabooks when needed. But there will be some standalone Windows 8 tablets too, among them the two Surface models from Microsoft, the Ativ Smart PC from Samsung and the ASUS Vivo Tab RT.

Windows 8 could bring high-end gaming to the tablet as Nvidia showed with the Unreal Engine 3 demo in Berlin. The new tablets will run full engines and not modified mobile versions. The Dell XPS10 and the Samsung devices will run on the Snapdragon S4 processor from Qualcomm, which the company claims can "leverage ARM CPU architecture".

Then there is a lot of buzz about a smaller, seveninch, iPad. Though you cannot start speculating about an Apple product until you have one in your hand, this screen size could send shivers down the spines of tablet makers who enjoy a market share just because of their preference for a peculiar size.

It is unlikely that the tablet will get any thinner. However, there is a lot of discussion on making devices that are rugged and weatherproof as touch devices are not being used in many scenarios. SONY XPERIA TABLET S
Running the Android IceCream Sandwich when announced, the Sony Xperia Tablet S will have a slim aluminium body with a splash proof design. It will have a 9.4-inch HD display with OptiContrast Panel with low friction coating and will be powered by a quad-core processor.

APPLE IPAD 'MINI'
There is a strong rumour that Apple will now come up with a 7-inch tablet to take on the competition. If it happens, it is likely to have the iOS 6 along with the high resolution display found on the new iPad and access to the millions of apps available on the App Store.

SAMSUNG ATIV SMART PC PRO
This Windows 8 device from Samsung will have a 11.6-inch screen on a thin 11-mm body. They will have a detachable keyboard to switch to a tablet when needed. The 10-point touchscreen will also be able to take inputs from the S-Pen.

SMARTPHONES
Smartphones are not just about hardware, but even the OS plays an important role. The major players - Apple, Microsoft, Google and RIM - are at the verge of introducing the next versions of their operating systems that will be closely knitted with the hardware.

Along with introducing Facebook integration and turn-by-turn navigation, the iOS 6 will introduce some new features such as natively storing and accessing tickets to events, setting call reminders, offline Web reading and 3D maps.

Windows Phone 8 will be integrated with the Windows 8 OS for tablets and hybrids. Android smartphones will have Jelly Bean soon, while RIM's BlackBerry OS 10 is also round the corner.

On the hardware front, we expect smartphones to get even bigger displays. The recently announced Note 2 boasts a 5.5inch touch display. As Nokia has announced with the new Lumia, wireless charging for smartphones could also become common.

SAMSUNG GALAXY NOTE 2
Announced at IFA in Berlin, the phablet will have a bigger 5.5-inch Super AMOLED HD display with a 1280x720p resolution. The Note II will be powered by 1.6 GHz quad-core processor and paired with 2GB RAM. Topping the hardware specs will be the Android Jelly Bean OS.

APPLE IPHONE 5
Rumoured to be called as the Apple iPhone 5, the next version of the iPhone is set to be launched anytime soon now. It is expected to feature a big display, have support for LTE and will incorporate NFC as well. IT will run on iOS 6.