Two and a half cheers for boring banking

Indian banks stand tall in a world still recovering from a global credit crisis, but now may also be the time to push the envelope.

The year 2010 is a good milestone to do a review of the Indian banking industry for the decade, and to state its rightful position as the engine of India's growth story. The total assets of the Indian banking industry grew from $250 billion to $1.3 trillion during these 10 years - a cumulative average growth of 18 per cent compared to the average GDP growth of 7.2 per cent over the same period. The quality of banking assets, too, improved substantially - return on assets or RoA, which stood at roughly 0.5 per cent in 2000-01, rose to 1.05 per cent in 2009-10, even as net non-performing assets shrank from 6.8 per cent to 1.1 per cent over the same period.

This growth and quality enhancement was achieved on the back of the industry adding some 15,000 branches, 40,000 ATMs, introducing a range of products, better risk management and improved services through deployment of technology. Notably, fee-based income from sale of third-party products and treasury services saw a phenomenal growth, powered by the increased availability of insurance and mutual fund products for retail customers and enlarged trade finance and foreign exchange portfolios for corporate customers.

This is not to say that gaps do not exist. They do: banking services are available to only about 40 per cent of the population, retail credit continues to be abysmally low, credit to small and midsize companies is still limited, critical infrastructure projects are struggling for funding and no Indian bank figures in the list of top 50 large global banks. However, each gap only points to the significant opportunity that exists for the industry to continue its high growth trajectory.

In the last year of the past decade, the mayhem of 2008 was consigned to the back of our minds as India's GDP grew by over 7.5 per cent, with the economy looking poised to regain its pre-crisis growth rate of over 8.5 per cent per annum. A survey published by the Federation of Indian Chambers of Commerce & Industry in February 2010 revealed that roughly 85 per cent of the respondents felt that the banking system was in a good to excellent shape and poised for a sustained growth rate of 15-20 per cent over the next few years. That show of confidence reflects in the growth in bank credit to the private sector in India which, after declining to about 12 per cent in the fourth quarter of financial year 2009, started to show signs of a turnaround, logging 17 per cent growth in the first quarter of FY 2010.

In view of the unanimity of opinions on the sustained demand-led growth of the Indian economy, as well as also partially hedging for uncertainty in the global banking system and the growing imbalance in asset liability positions, we have tried to identify the key initiatives, challenges and opportunities for the Indian banking industry for the next two years. While we have indulged in crystalball gazing in the past, our views are based on predefined regulatory announcements that will fructify in the immediate future or macroeconomic initiatives that are already well under way. While it is tempting for us to include the impact of socio-economic trends such as the demographic advantage and rising incomes, we are restricting ourselves to three key areas: major regulatory changes, impact of the new tax codes and the result of the new risk paradigms.

A year ago, in a keynote address to the Indian Merchants' Chamber on the impact of the global crisis on Indian banking, the Governor of the Reserve Bank of India or RBI, D. Subbarao, had made a reference to American economist Paul Krugman's idea of making banking "more boring". At one level, the Governor argued, getting "back to banking basics" was a critical requirement, but at another level, in an interconnected world, contingent risks between "boring banks" and "casinos" could not be wished away. 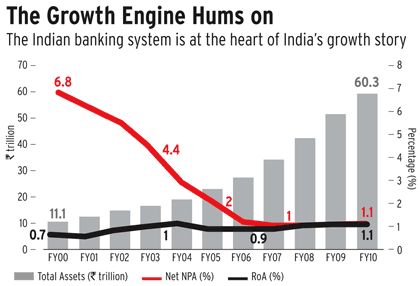 In his words "even if each institution is healthy and safe on a standalone basis, systemic risk can build up because of procyclical, herd behaviour. It is, therefore, necessary to supplement micro-prudential regulation with macro-prudential oversight."

This oversight, whether as a direct outcome of the G20 initiatives or through the recommendations in the Basel III draft guidelines, will result in significant changes in the way banks grow.

From a structural perspective, banking in India is starting to go through a significant shift of philosophy. This is manifesting itself in a number of new regulatory interventions from the RBI in the areas of holding companies and their subsidiaries, foreign banks, new banking licences and infrastructure financing (see Banking on Change).