Reviving the Health of Health-care

India has 750,000 doctors and 1.1 million nurses, yet practitioner density is about one-fourth that of America and less than half that of China. And there is a severe shortage of hospital beds and medical facilities
Print Edition: Jan 19, 2014 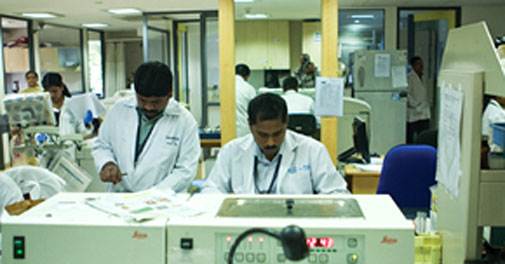 Vijay Govindarajan
India's health-care sector is in crisis. Though government programmes have tamed some infectious diseases, the country's performance on many health metrics is poor. The infant mortality rate is seven times that of the United States and three times that of China; almost two-thirds of babies in rural areas are born without the aid of skilled health personnel. India has 63 million diabetics and 2.5 million cancer sufferers, the majority of whom will not be diagnosed, much less treated. Seventy per cent of India's 20 million blind people could be helped with simple surgery - if it were available. Less than five per cent of the 2.5 million Indians annually who need heart surgery get it. Although India has 750,000 doctors and 1.1 million nurses, practitioner density is about one-fourth that of America and less than half that of China. And there is a severe shortage of hospital beds and medical facilities.

Rebuilding India's health system has to be a high priority for the next decade. But how? Fortunately, some Indian hospitals are innovating their way out of this dismal situation, which should serve as a model for the rest of the nation ("Delivering World Class Healthcare Affordably", Harvard Business Review, November 2013). For these internationally recognised hospitals, the constraint of abject poverty - which limits access to care among those who often need it most urgently - has provided both a psychological incentive and a moral imperative to achieve breakthrough innovations in health-care delivery. They treat medical conditions ranging from problems of the eye, heart, and kidney to maternity care, orthopaedics, and cancer.

The focus on serving both poor and wealthy patients is an essential element of the hospitals’ strategy. Serving both segments produces synergies

For these hospitals, successful innovation begins with a principled focus on purpose. Their founders and leaders are committed to providing care that is comparable in quality to that delivered while they were practising overseas, and they are committed to keeping it affordable. "An eye is an eye, whether it is a rich man's eye or a poor man's," says Dr. G.N. Rao, founder of L.V. Prasad Eye Institute (LVP).

All the hospitals in our group have audacious and inspiring goals. Narayana Health aims to provide "high-end, high-tech, high-quality care for the masses worldwide, irrespective of means". Aravind Eye Hospital's goal is to "eradicate needless blindness". For each of these hospitals, purpose drives the enterprise, and profits are part of what helps them achieve their purpose. Profits are also needed to finance growth, because, as Dr. Devi Shetty, CEO of Narayana Health, points out, "charity is not scalable".

Even the two not-for-profit hospitals on our list - Aravind and LVP - pursue cost reduction with greater passion than many for-profits. That is because running a consistent surplus allows them to serve more people. Since its inception 36 years ago, Aravind has paid for all of its free care and its capital expansion primarily out of operating surpluses - even though two-thirds of its patients receive free or subsidised care. Such patients likewise account for 50 per cent of those treated at LVP, 30 per cent at Narayana Health, and 20 per cent at Health Care Global Oncology (HCG).

The focus on serving both poor and wealthy patients is an essential element of the hospitals' strategy. Serving both segments produces synergies: the wealthy pressure the organisation to achieve high quality standards, and the commitment to serve the poor applies constant pressure to lower costs. The combination of these segments results in a model that is both high-quality and ultra-low cost. In the hospitals we studied, the model scales and is sustainable because it is operationally self-supporting. No need to go hat in hand to donors, bankers or government officials for funds to cover operating losses.

Three Core Areas
These hospital exemplars focused on three core areas. One, they practised a mindset of radical frugality. In ways both small and large, and in medical and non-medical areas alike, they found creative ways to economise without affecting health-care quality or patient outcomes. For example, a cardiac-care hospital routinely sterilises and re-uses $160 steel surgical clamps sold by the manufacturer as "single-use" products. When another facility found it was habitually discarding the unused one-third of sutures packaged for each surgery, it cut back on waste by asking its supplier to package fewer sutures. Another designed a new hospital with air-conditioning only in operating rooms.

Two, they pursued a rigorous strategy of task shifting intended to optimise the skills, experience and productivity of all employees. The goal was to make the best possible use of scarce talent - highly skilled clinicians and surgeons - and, likewise, to broaden the skills of support staff. Doctors thus stopped performing any task that a lower-skilled employee was better suited to perform, and lower-skilled employees were trained in a wider range of clinical tasks. Overall, task shifting has led to process innovations enabled, in some instances, by entirely new categories of health-care workers.

Three, they configured networks of care and facilities in a hub-and-spoke design. This allows for a more-orderly progression of care and rational allocation of often-scarce resources. Hub hospitals in urban centres assemble the most advanced technologies and highly specialised surgical and diagnostic skills. Smaller hospitals and clinics in outlying towns are equipped with lower-level technologies and operated by non-specialist physicians, assisted by nurses and support staff. Providers at the spokes treat patients who have straightforward needs. They refer those with more complex issues back to the hub or use telemedicine technologies to consult with hub specialists on treatments.

Unimagined Innovations
Taken together, each of these focal areas has led to unimagined innovations. Frugality alone is a continuous source of ideas. Narayana Health provides physicians and others with a daily summary of the economic consequences of their clinical and operational decisions. Ongoing awareness adds insight that can improve future decisions. Aravind Eye Hospital manufactures its own high-quality intraocular lenses, used in cataract surgery, for $2 apiece instead of buying them for $200 from international suppliers. Many of the hospitals we studied are beginning to train patients' families to provide post-operative care in the hospital that they will later be providing at home.

Aravind Eye Hospital manufactures its own high-quality intraocular lenses, used in cataract surgery, for $2 apiece rather than buy them for $200 from international suppliers

Many of India's best healthcare innovations are in the area of process. In Aravind's operating rooms, the ophthalmologist is positioned between two surgical tables. While she operates on one patient, the next is being prepped on the second table. When the first surgery is completed, the surgeon pivots to the second table and is handed a fresh set of instruments. The first patient is wheeled out, and the next is brought in and prepped. As many surgeons attest, the time between "wheels out" and "wheels in" is the critical factor in OR efficiency.

In order to close India's enormous gap between health-care supply and demand, other Indian hospitals should strive to adopt these practices: the hub-and-spoke configuration, the practice of task shifting, a mindset of aggressive-but-focused frugality, and the strong commitment to serve poor and well-to-do patient segments. Health-care, being a service industry, employs lots of people. Thus, reviving health-care will be a huge job creator - an important priority in India. But more fundamentally, healthcare is a human right.

The author is  Earl C. Daum 1924 Professor of International Business at the Tuck School, Dartmouth, and is ranked among the top 50 management thinkers in the world
TweetYoutube
Tags: Indian healthcare | Healthcare sector | vijay govindarajan

'India should aspire to end inequality of income'

India seems to be never able to fulfil its economic potential