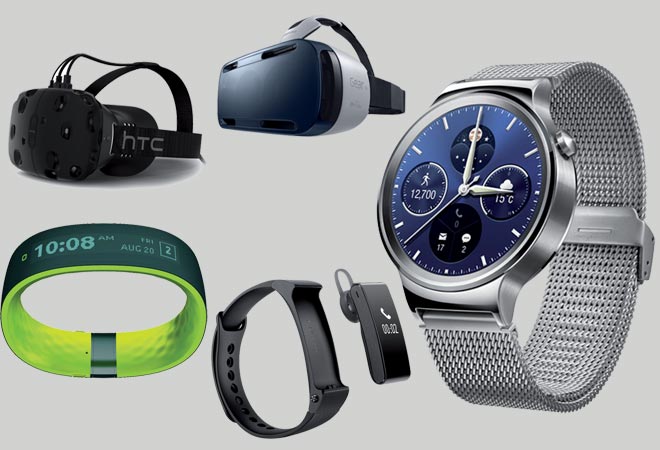 After smartphones, it is the wearables that have gained a lot of attention at this platform. Name any big brand and most of them have focused more on the wearables than their smartphones. Interestingly, we saw a few new names in this space. For instance, Huawei is receiving praise for its smartwatch worldwide. We take a look at some noteworthy technologies in the wearabales space.

Huawei Watch
Huawei has stepped into the wearables space and has announced its smartwatch, Watch. Running on Android Wear, this watch has a 1.4inch AMOLED display made of sapphire crystal. The screen has 400x400 pixel resolution. It has a Qualcomm APQ8026 1.2Ghz processor under the hood, 512MB RAM and 4GB internal storage. It also has an inbuilt mic, supports Bluetooth 4.0/4.1 and a 300mAh battery. According to the company, the Watch contains 130 components and it takes 260 manufacturing steps, 160 of which are done by hand. It comes with a heart-rate monitor and Huawei-designed health tracking apps. The watch will be available in leather strap or silver or black metal mesh band.

HTC Grip
HTC has stepped into the wearables segment with its Grip. This fitness band is compatible with the Under Armour app for iOS and Android platform. The Grip captures distance, pace and calories burned, and syncs with the smartphone. It fetches notifications such as incoming calls, responds to messages and controls music tracks. Its curved display looks nice and makes the band easy to operate. It is IP57 certified, which means it is waterproof and can stay under water up to one meter for 30 minutes. Its 100 mAh battery, HTC claims, is enough for two-and-a-half days on a single charge. In Sports mode with GPS, it can work for up to five hours.

Huawei TalkBand B2
Huawei was not in the news only for its smartwatch. It came up with another wearable, TalkBand B2. This is a hybrid device that you can wear as a smartband or pop up in the ear as a Bluetooth headset. It offers a host of features including automatic activity tracking, sleep monitoring, crystal-clear hands-free calling, and smart audio routing. It has an aluminium alloy metal chassis and multiple strap choices to go with. It has a touch screen and a single button control. This band is water- and dust -resistant and will be compatible with Android and iOS devices.

Samsung Gear VR
Innovation Edition The Gear VR Innovation Edition has been developed from the original Gear VR that Samsung had showcased with the Galaxy Note 4 and is 15 per cent smaller. The new device provides a 96-degree field of view. It has an accelerometer, gyrometer and proximity sensor to keep track of your movements.

HTC Vive
With the announcement of Vive, HTC too is talking about virtual reality. The Vive is a virtual reality HMD being developed jointly by HTC and Valve Corporation. It promises to create an experience that spans the scale of a full room, allowing you to walk around a simulated 3D environment and interact naturally with the objects within it.

Tablets, Projectors that made news at MWC 2015

Smartphones that caught our fancy at MWC 2015