Just when you think the advantage is with one of them, a few thrusts and parries later, it swings to the other. As equations change at the Centre, the battle between Anil Ambani and Mukesh Ambani gets shriller—and more desperate. BT's Suman Layak reports.

When elephants fight, goes the adage, the grass suffers. When the Ambani brothers do battle, one is tempted to add, it’s impossible to determine who is winning. Just when you think the advantage is with one of them, a few thrusts and parries later, it swings to the other. Consider: In the first week of July, when the spotlight was centred on Amar Singh, Secretary General of the Samajwadi Party (SP) and the king maker on whom the fate of the United Progressive Alliance (UPA) depended, the pendulum appeared to have swung in favour of younger brother Anil.

Singh, after all, had come out with all guns blazing in an attempt to coax the government to introduce policy proposals that didn’t seem to be doing Mukesh, Chairman of Reliance Industries (RIL), any favours. A proposal to introduce a windfall profit tax on private petroleum companies (like RIL) and another to scrap the export-oriented unit (EOU) status of such private refineries were just two potential roadblocks to the till-now-relentless progress of the RIL juggernaut. 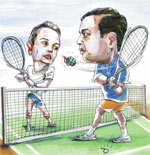 Intense battle on
The elder Ambani appeared to have been pushed on the back foot. Not for long. A few days later, on July 17 RIL appointed an arbitrator to settle a dispute with Anil’s Reliance Communications (R-Comm), which was seeking to cut a merger deal with South African telecom giant MTN. The Mukesh camp did not favour this transaction as it felt that R-Comm should first allow RIL the right of first refusal before venturing to swap equity with another player.

A day after the arbitrator’s appointment came an announcement that R-Comm and MTN had mutually decided to call off the deal. Suddenly it was advantage Mukesh. But at the time of writing, it seemed the play for MTN was far from over, with the Anil camp hinting that it has enough legal remedies in its armoury.

For observers following the Ambani vs Ambani slugfest over the past four years now, last fortnight would appear to be just another day in the arena for the two billionaire gladiators. The MTN saga was just a sideshow to the tug of war at the Centre as the UPA government attempted to stay afloat. As Amar Singh appeared to be keen to push through policies that apparently favoured Anil, in exchange for promising the SP’s support to the UPA (in place of the Left parties that had pulled out), Mukesh was quick to react by meeting up with Prime Minister Manmohan Singh.

As an old Ambani hand points out: “When your companies’ revenues add up to 5 per cent of the gross domestic product of the country, you tend to have your people everywhere, in every party. And, like political parties, businessmen also issue their own whips to parliamentarians who are aligned with them.” That also means you need to have a say in every fight that is being fought.

It would appear as if the Mukesh camp did enough to keep MTN away. As one insider in the Anil camp asks: “Will you buy a house if a neighbour claims he has some rights over it?” Yet, RIL’s intervention may not be the only reason for the transaction falling through. A bigger factor could simply be that a deal just wasn’t workable. A few days before the exclusivity period for negotiations (which had been extended once) was to end, the Anil camp seemed to realise that the odds were against an acquisition taking place. RComm had no way of directly acquiring 51 per cent in MTN— even reaching 35 per cent would have been a problem.

Information also trickled in that the Mikati family of Lebanon probably controlled more than 10 per cent in MTN through other entities. Najib Mikati is a former prime minister who could be prime minister again.

And MTN chairman Cyril Ramaphosa could be the next president of South Africa. Such heavyweight negotiators on one side may have been one reason for R-Comm to bow out of the talks. The Anil camp didn’t waste the opportunity to come down heavily on the rival camp when it announced that it would initiate arbitration proceedings—RIL was tarnishing India’s image in foreign eyes, it thundered. There may be some truth in that statement, although it’s difficult to pinpoint the blame just on anyone of the brothers.

As one battle-weary veteran at one of the camps says: “This looks like an endless war now, which is not doing anyone any good. Instead of being looked upon as business leaders and community leaders, the Ambani brothers are being looked upon as people who bicker over every available issue. It will hurt every time they go for a deal with companies abroad.”

The brothers have enough bad history between them to last a life time. They parted ways on June 18, 2005 after signing an agreement on the day before, which was also signed by their mother and their sisters. The agreement, many say, has just one copy and is kept with mother Kokilaben D. Ambani. Is it a legal document? That’s a multi-billion dollar question to which few have an answer. The agreement divided the businesses between the two brothers. Later, RIL created a scheme of demerger, and four new companies were created and management control handed over to Anil. However, the agreement itself has got the brothers squabbling.

Anil’s Reliance-Anil Dhirubhai Ambani Group (R-ADAG) has written hundreds of letters to RIL, citing how the elder brother’s group is violating the June 17 agreement. RIL has written back saying that its board does not recognise any such agreement and is bound only by the scheme of demerger that had been passed by its board of directors and the shareholders and to which the Bombay High Court had given its nod on December 9, 2005. Here’s proof of that. Documents that were made available to Business Today reveal that on July 24, 2007 RIL company secretary Vinod Ambani wrote to Reliance Energy: “I have been further directed to state that the Board of Directors is neither privy to nor concerned with any family arrangement by whatever name called among the promoter family and Reliance Industries is not bound by any such arrangement or any arrangement or agreement to which it is not a party.” Harish Salve, the RIL counsel, had called the family agreement “a piece of trash” in the Bombay High Court in April this year.

Kokilaben D. Ambani
It is an interesting situation where the R-ADAG side continues to refer to the agreement; and RIL writes back to say this agreement is not relevant. RIL swears by a set of agreements that was signed by it and the four companies that were being demerged on June 12, 2006.

Anil challenges these agreements, saying the manner in which they were signed was unfair as the companies were still under RIL’s control. As one insider points out: “The brothers can go on fighting. And depending on whose office you are sitting in, either side’s argument can seem logical and legally valid. Between the two agreements, it is a chicken and egg kind of a story.”

How far will it go?