A journey of the mind and moolah 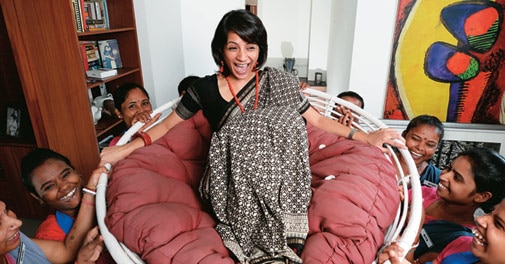 Lifting their spirits: Gauri Singh, Founder of The Maids' Company, with staff she's trained in Delhi.

Occupational hazard, in this line of work, can at times include being pulled into an SUV, or being stalked by one of those cars with tinted glasses that emanate menace. In Delhi-NCR, where such vehicles abound, the threat is real even at a seemingly safe hour like nine in the morning.

It is not within Gauri Singh's powers to eliminate those threats, but what she has done is given the women on her rolls sustained employment, predictability of income, and a decent work environment - perks that come with being part of an organised set-up. That is more what the 200-odd women managed by her outfit, The Maids' Company, have had in their life so far; they come from the absolute bottom of the pyramid.

There are more where they come from. According to World Bank estimates of last year, India has a third of the world's poorest people - those living at less than $1.25 a day. A large portion of that population is women who have survived attempts to kill them before they are born and exploit and abuse them afterwards. So far, the main warriors in the country's battle to protect and uplift its women have been policymakers and NGOs. Now private enterprise has stepped in, its chief weapon being a promise of economic independence.

The Maids' Company is one of those. But its founder Singh is not in it for charity. A postgraduate from the London School of Economics, she saw a business opportunity in the unorganised sector of domestic workers and started her outfit in 2011.

Maids in India spend their lifetime grappling with low pay, zero benefits, indeterminate working hours, and abysmal working conditions. The sizeable army of cleaning ladies, cooks and nannies slave away in a sector that has no regulation and no oversight because, well, it does not exist on paper. Singh trains them, negotiates on their behalf, and ensures fair work practices. In return, she charges a fee from the client and a percentage of the maid's salary every month. She is also rethinking the model to make charges more competitive for her clients. Her maids work fixed hours and their salary rises 10 per cent every year. The client gets quality manpower and the promise of up to three free replacements.

Far away from the SUVs of Delhi-NCR, in Karnataka's Udupi, 34-year-old Pushpa Poojaarthy has been working with DesiCrew, a rural BPO, for four years. For Poojaarthy, her data entry job was a godsend. She has been the provider for her family ever since her husband died. The family in her case includes not only the two children but also her mother and sister. The DesiCrew job gives her dignity, in addition to Rs 8,000 a month. "My job is a source of encouragement for me," she says.

DesiCrew started in 2008 to find a solution for rural unemployment. "We wanted a model that brought jobs back to rural areas. Initially, gaining customers and basic infrastructure were the big challenges," says CEO Mani Varnan.

Bringing jobs to rural areas was also the imperative for providing jobs to women, who constitute a much smaller portion of migrant workers than men. Nearly 70 per cent of DesiCrew's workforce is women. They bring stability to the company's workforce. What the BPO industry loses to attrition in a month, DesiCrew does in a year. "Women have to manage family and work and form a far more stable workforce," says Veena Shetty, who moved to Udupi from Bangalore after getting married and joined DesiCrew as a centre manager. She now heads its HR. 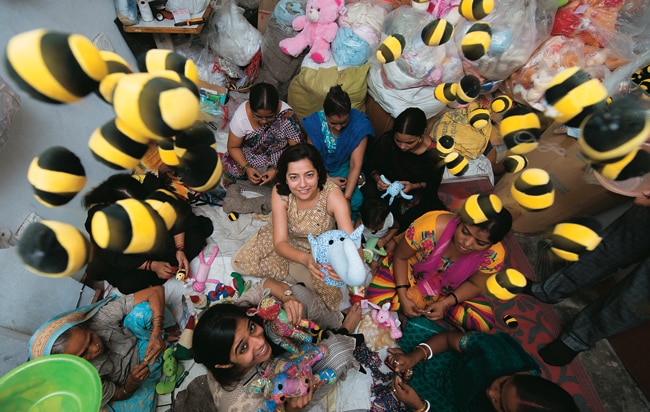 TOY WORLD: ProCraft CEO Saloni Malhotra (centre), with employees. ProCraft was set up to help small artisans. Photo: Vivan Mehra
Pramod Panwar's is a quintessential case of starting afresh after a fall. He set up his own export firm after losing his job as a junior merchant at an export house in 2010. His is a company with the same difference as DesiCrew; Touchy Exports works with underprivileged women. Panwar trains women from slums to make handmade toys. His network has now grown to 30 women who have the option to work from home.

"Women come to us from slum areas, some of them are in abusive relationships and require flexibility of place and time of work. We train them and help them become financially independent," says Panwar.

ProCraft helps Touchy find buyers for its toys overseas. An enterprise of All India Artisans and Craftsworkers Welfare Association, ProCraft has been set up with the mandate to create markets for small artisans. Its Chief Executive Officer, Saloni Malhotra, who is also the founder of DesiCrew, says: "We help artisans in packaging and modifying product designs for international markets. The idea is to increase the income of artisans and make it consistent."

For Malhotra, just as for Singh of The Maids' Company and Desi Crew's Varnan, it is as much a business as a journey - a journey to change mindsets. Singh, for one, is yet to break even on the close to Rs 90 lakh she has invested. For now, she is busy organising shuttle services for her maids to ward off those cars with tinted glasses.

How women leaders are coping with the MFI crisis