A good deal for everyone

The nagging issue of managing provident fund (PF) savings of 40 million workers, of both government and organised sectors, has ended in a win-win fashion. ICICI Prudential, HSBC, Reliance Capital and State Bank of India (SBI) have been appointed as the fund managers. Private pension managers may deliver better returns.

The nagging issue of managing provident fund (PF) savings of 40 million workers, of both government and organised sectors, has ended in a win-win fashion. ICICI Prudential, HSBC, Reliance Capital and State Bank of India (SBI) have been appointed as the fund managers. 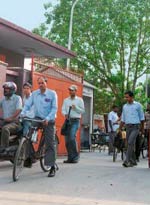 Workers rejoice: Competition between fund managers may give better returns
Their taking over of the management of Rs 2.5 lakh crore PF corpus means not just an annual saving of Rs 2.5 crore to the Labour Ministry, but possibly a higher rate of return for savers. The working class now gets an annual return of 8.5 per cent on its PF remittance, while many banks are offering 10 per cent rate of interest on term deposits. The rates are headed further up.

The new arrangement, which takes effect from September, will end long years of SBI monopoly over pension funds. The country’s largest PSU bank was often criticized for not efficiently handling the PF assets. It was seen delivering sub-optimal returns by idling PF funds and, often, parking them in its own term deposits. Ashok Jainani, Head of Research at Mumbai-based Khandwala Securities, sees the entry of private players as a healthy sign.

“This will lead to a competition among the fund managers to deliver higher returns. Those who fail, however, cannot stay on. Subscribers can now expect competitive returns,’’ he says.

HDFC and Birla Sun Life asset management companies (AMC) were among the other private players who had wanted a slice of the PF pie. But the two AMCs did themselves in by quoting “zero’’ fee for managing assets. That disqualified their bids. Evidently, at zero service charges, a contract becomes legally unenforceable. HSBC, however, will charge the least at 0.0063 per cent, followed by ICICI Pru’s 0.0075 per cent. SBI and Reliance Capital will each charge 0.01 per cent of the assets as fee.

The government’s independent move, however, has not gone well with either the Left parties or the BJP-backed Bharatiya Mazdoor Sangh (BMS). Both want the public sector to handle PF funds and increase the rate of return.

What has heightened the Left’s ire is the inclusion of Reliance Capital, apparently at the last minute. The Left parties see this as a price the UPA-led government is paying for the support the Samajwadi Party extended it during the recent confidence vote in the Lok Sabha. SP’s Amar Singh is a friend of Anil Dhirubhai Ambani, whose Reliance ADAG group owns Reliance Capital.

Labour Secretary Sudha Pillai, however, has denied any political influence, maintaining that Reliance had very much figured among the bidders.

The decision on the PF fund issue is the first significant one after the Left parties withdrew their support to the government after failing to stall the Indo-US nuclear deal. Hopefully, a series of reform initiatives will be unveiled in the days to come with Prime Minister Manmohan Singh’s hands now untied.