A matter of class

By one estimate, some 365 new hotels will open in the country by 2011. As in other industries, many of the announcements will remain just that. But that’s not the only reason why the Oberoi Group, which runs the Oberoi chain of hotels, is taking it cool.

By one estimate, some 365 new hotels will open in the country by 2011. As in other industries, many of the announcements will remain just that. But that’s not the only reason why the Oberoi Group, which runs the Oberoi chain of hotels, is taking it cool. In an industry where a lack of rooms has created a near stampede among investors, Oberoi wants to plant itself firmly in the top end. “We have set high benchmarks for ourselves, even though the response from guests is good (read: no one is complaining),” Vikram Oberoi, Joint MD, Oberoi Hotels & Resorts, told BT recently in Bangalore.

That, however, doesn’t mean the Oberoi brand isn’t expanding. The 43-year-old Oberoi says that there are more than 15 properties under development within and outside India. 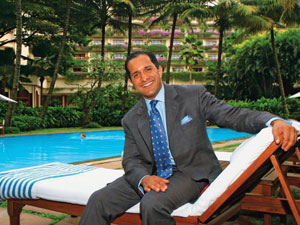 A ‘Trident’ hotel will open in Mumbai next year and an Oberoi luxury hotel will come up in Gurgaon in 2009. Bangalore will have two new hotels, one of which will be at the new international airport. The Cyber City in Hyderabad, too, will have a new hotel soon.

As the Indian economy picks up momentum rapidly, Oberoi sees a great scope for the expansion of the luxury hotel business. “We are very optimistic like the other hoteliers,” he says, while pointing out that many more non-hoteliers are entering the business. (Oberoi was in Bangalore to receive the World Travel Awards. The Oberoi Group led the Asia and India lists in what is considered the ‘Oscars of the international travel industry’, with awards in six different categories, including Asia’s Leading Luxury Hotel Brand). As for its own record, Oberoi Hotels & Resorts in India recorded an average occupancy of 55 per cent last year, with an average room rate (ARR) of Rs 14,458.

Optimism is no doubt the dominant mood in the industry. In the four years since 2002, foreign tourist arrivals have jumped 85.8 per cent, and India received Rs 29,600 crore in forex exchange from the tourism sector last year. While the tourist inflow has surged, supply of rooms hasn’t kept pace. According to reports, the Centre is toying with the idea of offering tax breaks for a five-year period to twothree-and five-star, and budget hotel projects across the country. The idea is to promote capacity addition in view of the shortage of rooms hitting the tourism sector badly.

On his part, Oberoi suggests that the government should simplify the Visa procedures to facilitate tourist arrivals. There are countries where tourist Visas are issued at the airport upon arrival. India, he says, could consider offering that to travellers from specific countries. “There are more international flights coming into India, world-class airports are being set up, and the roads are better,” says Oberoi. Needless to say, Oberoi’s attempt would be to ensure that more and more of the international travellers check into one of the group’s hotels.