IndiGo manages to avoid getting caught in the turbulence in the aviation industry. 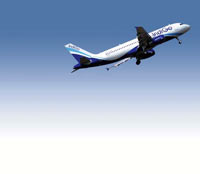 Three years ago, the task in front of Bruce Ashby looked rather daunting: his brief was to establish a successful low-cost operation in India. This was at a time when several players had already entered the segment and a few had even begun experiencing some initial success. Naturally, many people doubted that IndiGo would ever fly. But as Ashby leaves his job as Chief Executive at the end of 2008, he must have a smile on his face. The reason: IndiGo is the only airline to have consistently grown over the past few months in India, as the rest of the industry has been wrapped in turmoil.

“It has been an exciting time,” he jokes. His successor and President, IndiGo, Aditya Ghosh, adds: “It seems Bruce finally broke his jinx of loss-making airlines here.” To be fair, both Ashby and Ghosh concede that IndiGo is not profitable. “We have had a few profitable months, though,” Ashby points out, adding: “But high fuel prices have hit us just as they have hit everybody.” Bruce Ashby
Ashby points out that while high fuel prices have meant increased fares, this, in turn, has meant lower numbers of passengers. “Our average seat factors have dropped from the mid-70s to the mid-60s before the festive season rush,” he says. But this has meant that the airline has also made a bit more money. “Our revenues per seat have improved as have our costs per seat,” Ghosh says, adding: “But fuel prices have hurt.”

The airline is not deferring any aircraft deliveries and plans to add another two to its fleet before March 2009 along with two-three new destinations to its network of 17. “Why have we done well?” Ashby reacts when asked the question. “I guess it is because we have stuck to our plan. The only part of the plan that we changed was we started serving sandwiches and aerated drinks. But we have been truthful to the low-cost ethos; we tweaked it whenever we needed to.”

One such “tweak” was earlier this year when aviation fuel prices exceeded Rs 70,000 a kilolitre: the airline actually cut back service instead of following the low-cost mantra of maximising flight-time. “It did not make sense. We are not blind converts to the rules,” Ghosh says.


Before Ashby leaves, he is crisscrossing the globe, meeting finance companies and lessors. “We want to assure them that we will pay all our bills on time. You know what I am most proud of? The fact that we do not hold back any payments,” Ashby says. Proud or not, IndiGo’s quiet success might be the one silver lining in the dark cloud that is surrounding Indian aviation; it also shows other tycoons that running an airline takes more than bluster.