WiMAX promises to be the next big thing in driving broadband penetration in India.

Forget the golden quadrilateral. India is now revving on the info superhighway. Access to the Internet has traversed a long way since one waited and waited while the dial-up beeped on and on. DSL broadband connectivity quickened the process, while Wi-Fi afforded wireless networking. The future appears better. There’s WiMAX to look forward to. Essentially, WiMAX takes part care of that old hitch in connectivity— the last mile—on a broader scale. The technology obviates the need for cabling/wiring to the device. Access devices fitted for WiMAX reception will get the feed from base stations. Think of the cellphone network. WiMAX works similarly. There is a network of towers, each of which covers, in ideal conditions, an area of around 50 km. At download speeds of up to 1-5 Mbps, Net access in WiMAX will be much quicker compared to the current standards of 1-2 Mbps for homes and around double that for commercial use. “India has 300 million cellphone users, but only 4 million with broadband connections,” points out Ron Resnick, President and Chairman of the WiMAX Forum, an industry-led organisation that certifies and promotes interoperability of broadband wireless products. “The basic infrastructure required for WiMAX already exists here in the form of cellphone network and fibre network.” The Forum has 24 companies and 20 other groups, including IIT Delhi, as partners in India. Its efforts are helped by the fact that major mobile operators are among its members. 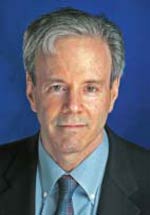 Ron Resnick
One cloud on the horizon is the auction of spectrum for WiMAX. The technology in India will typically use frequency bands in the range of 2.3-3.5 GHz. Tata Communications has acquired a licence for 12 MHz of spectrum in the 3.3 GHz band and has completed deployment of pre-WiMAX network in 65 cities. Tata officials claim 90 per cent of New Delhi is now ready to receive WiMAX feed. BSNL, too, is going strong on WiMAX and has already awarded a franchise contract to Soma Networks for commercial trials in Andhra Pradesh, Gujarat and Maharashtra for a deployment of 25 WiMAX base stations in each state. In fact, its focus will be rural India. Reliance, too, has the infrastructure in place in 100 cities. But the fear is that those companies who have spent on 3G will lobby to block allocation of WiMAX spectrum. “The experience is that 3G never made money for companies in the West,” says Resnick. “However, 3G players in India should not see WiMAX as a threat. It is a complementary technology.”

The companies currently use customer-premise equipment (CPE) for reception of WiMAX. However, within months, WiMAX will provide fully mobile access to the Internet. There already are USB dongles that can be used with computers and laptops. Intel has developed a cheap chip for WiMAX receptivity that is small enough to be used for ultra-mobile PCs, mobile phone handsets, MP3 players, Sony’s PlayStation Portable and a host of mobile Internet devices. This means that once you are registered for WiMAX with a service provider, anywhere you go in the country, you will be able to access the Net through diverse devices.

WiMAX inside
“India must opt for the first mover advantage over China,” says Resnick, pointing out how wireless broadband technology can immensely enhance services like telemedicine, distance education and e-governance. Concepts such as those in the AV Birla Group’s ads showing rural schoolchildren receiving lessons over the phone can be powered by WiMAX. The WiMAX Forum has tied up with IIT Delhi to set up a WiMAX applications lab, the third in the world after those in Taiwan and the US.

The Forum is upbeat over the prospects of broadband accessibility in India. It forecasts that by 2012, the Indian market will support 27.5 million WiMAX users, or 20 per cent of global users of the technology. “Any service provider with innovative service offerings, attractive devices and go-to-market plans that maximise the utility offered by WiMAX technology to pricesensitive Indian customers can use this proven tech to quickly gain market share,” says C.S. Rao, Chairman, WiMAX Forum India Chapter. In the near future, networks may offer bundled GSM+WiMAX or CDMA+WiMAX services. The Forum projects the Indian WiMAX market, including devices, to be worth Rs 52,000 crore by 2012.

As part of the Flat World, India has eagerly adopted technology to network with the world. Now, it is on the cusp of an information revolution that could fuel its way to the future. Amid the news about the economic crisis gripping the globe, this surely is one little piece of good news.

A hill station for work and play