Cell phone makers go all out to woo youngsters. 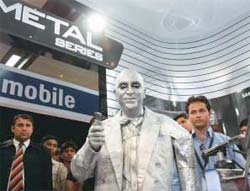 Mobile Asia expo is connecting with young consumers
It’s a Saturday afternoon and Hall No. 7 at Delhi’s Pragati Maidan is teeming with college kids. On display at various stalls are the newest in teenage accessory: cellular phones. Mobile Asia, the fourth in a series of expos organised by the Indian Cellular Association (ICA), is in town and it is specifically targeting GenNext consumers. “The next wave of growth in mobile subscribers would primarily be from the younger generation. Mobile Asia 2008, therefore, aims to provide a platform for the industry and trade to interact and communicate with GenNext,” ICA National President Pankaj Mohindroo said in a release.

Small wonder, then, all the big handset marketers (not to mention value-added service providers) were to be found at Hall No. 7, with their best wares on display. Nokia, the market leader, was showcasing its N95, while LG was strutting its new K-series phones, including the K510 and K600. The latter phone comes with InteractPad—a small touch-sensitive display beneath the main screen that is used for navigation, with context-specific virtual keys that change across applications. LG is marketing it as its new intuitive phone.

Samsung unveiled its “touch” smart U-900, which it plans to launch in a few months. Another attraction was Motorola, which not only showcased its MOTOROKR E6— an advanced phone in the series, characterised by its opera browser touch screen—but also displayed the Z-10, which is amongst its many multimedia applications and also has a movie maker. Motorola actually calls it the “mobile filmstudio”.

With eight million customers jumping onto the cellular bandwagon every month, mobile phone marketers will have plenty of reasons to keep churning out newer handsets—and wooing young consumers, some 300,000 of whom were expected to visit Mobile Asia.

A few feet too many