Mukund Mohan, whom Microsoft recently relocated from Bangalore to Redmond to build Microsoft Ventures in the US, is a dream mentor for entrepreneurs. 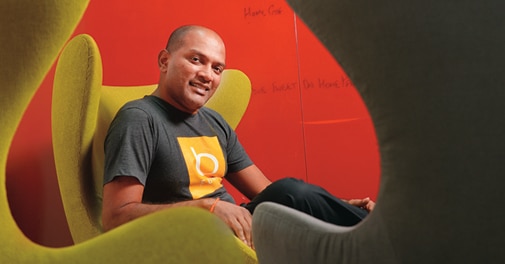 One day in 2006, Mukund Mohan stared at his receding hairline. He didn't like what he saw on his crown - a little bit of hair here, a little bit there, like a patch of garden insufficiently watered. "Either I want lot of hair or no hair at all," he told himself before shaving it all off.

Those who knew the India Director of Microsoft Ventures well were not surprised. People call him 'extreme'. He doesn't like words such as 'normal' or 'average'. "Average is boring. Either be excellent or don't do it at all," Mohan says, talking of start-ups, his biggest passion. And he has an equally extreme view about investors. "If an investor (in a start-up) does not help you with a next step, he is a moron. Period," he has written on his blog.

His search for excellence in India's start-up ecosystem has helped Microsoft connect with exciting new companies that are working on new technologies. Mohan joined the company two years ago to head an initiative wherein the world's largest software product firm offers budding start-ups workspaces, access to technology, mentorship and most crucially, lines of communication with the venture capitalist community. The idea is simple - today's small could be tomorrow's biggie. By engaging with innovative start-ups at an early stage, Microsoft can keep a tab on innovations and also sell the innovators its products and platforms when they scale up.

Microsoft Ventures has done well in India - since July 2012, 36 companies have passed through its programmes and 82 per cent of them have got funded.

A happy Microsoft has now awarded Mohan a global responsibility. From July, he will relocate from Bangalore where he now lives to Redmond, the company's headquarters in the US; he will help set up and boost Microsoft Ventures's presence in the country. Mohan introduced us to the former head of Nokia's developer ecosystem. Nokia eventually became a customer: Jasminder Singh Gulati Co-Founder, NowFloats
So, why does Microsoft love this bald chap so much? And not just Microsoft - so do many start-ups.

He worked with Cisco for three years before turning serial entrepreneur. He started and exited three companies (Interfinity, Amura, BuzzGain) and failed at one (Asera). He has invested in 25 start-ups in Silicon Valley and in India. He writes a popular blog, tweets, plays tennis, loves wearing chappals, prefers communicating through apps than mails and is often spotted slipping in and out of product conferences, not forgetting to hug everybody he knows. He does not watch television, hardly reads newspapers. Mohan is married to angel investor Vinita Ananth; they have four children. He moved to India in 2008 so that his kids could see what India was like.

The move also enabled select Indian entrepreneurs to see the world through his lens. Mohan brought to the table both experience and connections. His friends and co-workers feel his phone contact book is one of the most organised they have ever known. "He carefully saves all the details about a new contact he makes. His ability to delve into his contact list and use it effectively is amazing," says Jasminder Singh Gulati, Co-founder of start-up firm NowFloats, which can get you a website with automatic search engine optimisation in 13 minutes. "He introduced us to the former head of Nokia's developer ecosystem. Nokia eventually became a customer," Gulati adds.

His was one of the first companies to be mentored by Mohan at Microsoft. Founded in 2012, the company has scaled up since and has 10,000 customers.

"Bringing up something which is at an early-stage to a product and then scaling it to newer heights excites me a lot. Helping people do something they want to drives me more than anything else," Mohan says. "You meet amazingly interesting and smart people who do the impossible. I love watching these people and their companies take shape and grow. It's a lot of fun."

His expanded role at Microsoft Ventures now means he can help start-ups in the US as well as in India and elsewhere. His ability to help entrepreneurs build networks has made him an enduring presence, even with his extreme likes and dislikes. And his innate goodness is creating quite a legacy.

Krish Subramanian is Co-founder of ChargeBee, a billing solutions start-up. The company is not part of any Microsoft programme, but Mohan mentored him. "He mooted the idea of keeping a blog calendar - we have written about 300 blogs in the last year and a half and it has helped us in our search engine optimisation," Subramanian says. He offered Mohan equity in return but was turned down. "When you scale up and do well, help other start-ups. My equity can go to them," Mohan said.

What next for Darshan Patel's Vini Cosmetics after Fogg?