A status check on the US economy to know how close the world’s strongest economic engine is to a re-start.

For a world waiting with bated breath for news of any revival in the US economy, the words of James Poterba, President of the National Bureau of Economic Research (NBER), came as a distressing reality check: “There is something changing… consumers are probably realising that the latest consumer goods needn’t be on their shelf.” On a visit to India, Poterba was speaking in Delhi recently.

If that’s bad news for the global economy, it is shattering for emerging economies like India and China (see China’s Worst Hour?) . The two are now realising that their fortunes are intertwined with that of the US far more strongly than had been thought so far. Therefore, it is important to get a status report on how bad the US economy still is and how effective the attempts being made to turn it around are. 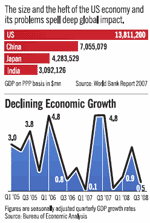 Click here to Enlarge
The US economy is in contraction mode (see graphs), even as the government tries to spend its way out of the recession. The incoming Obama administration, too, is under immense pressure to provide quick fixes. Obama’s proposed $775 billion package may well push the keeling US fiscal deficit to over 10 per cent of GDP or $1.15 trillion.

Long considered an insatiable spender, the US consumer is now desperately trying to conserve cash, just like anyone else in uncertain times. Blame the rising joblessness at a high of 7 per cent and poised to grow. No surprise then that value retailer Wal-Mart reported decline in sales making the recent holiday season the worst in nearly four decades.

In response to this massive lowdown of demand, and in line with the falling equity and real estate asset values, prices across the board are crashing swiftly, raising the spectre of deflation. That means production and investment declines, leading to vicious downward spiral.

The prescription for the world’s largest economy ($14 trillion) has so far included both lax monetary policy and enhanced tax cuts. Yet, the US economy probably needs not just spending of the kind that has happened but more of the spending that propels employment—in short investment spending. Obama is expected to encourage infrastructure spending, green projects even as he is keen on spending to improve broadband connections and rebuilding school classrooms, laboratories and libraries.

There is a fear that some of the immediate policies in the medium term may lead to more problems. The current rush into US government securities despite the rising fiscal deficit and near-zero interest rates is an indicator of some.

Clearly, the options are limited. While Obama campaigned on raising taxes for high income households, it is almost not possible as the top 1 per cent of the US households contribute nearly 40 per cent to taxes. There could be benefits which might accrue from introduction of value-added tax or changes on alternate minimum tax and payroll tax. ] However, in the long term, as Poterba points out, the US will have to look at its unsustainable entitlement programmes—its social security and healthcare programmes. But, as the Clintons discovered, that is a big problem to chew. Much depends on the appetite that President Obama has for the change he promised.