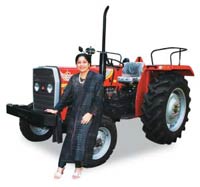 Mallika Srinivasan
Explains Mallika Srinivasan, Director, TAFE, the flagship company of the Rs 6,000-crore, Chennai-based Amalgamations group: “This is a 40,000-tractor market annually.” The company is looking to produce 15,000 units a year at its Manisa plant, which is expected to become operational in early 2009 and contribute about Rs 450 crore a year to TAFE’s top line.

Then, there were other reasons for the move. The bankruptcy and closure of Uzel, a local company and one of the two big players— the other is New Holland— had paved the way for the entry of new players in Turkey. USbased MNC John Deere has also recently entered the market. Also, a thriving ancillary base at Manisa was an added advantage.

Rival M&M’s Farm Equipment Sector, meanwhile, is busy expanding operations in Turkey. In August, the company tied up with a distributor, who will assemble the SKD (semi-knocked down) kits from India, market it as well as provide after-sales service. “In this case, we are leveraging the existing infrastructure of the distributor itself,” say Anjou Choudhari, President, M&M Farm Equipment Sector.

For both TAFE and M&M, entering Turkey is part of a larger plan to explore markets outside India. But clearly, M&M has been more aggressive in its overseas strategy. In the US market, it has become a significant player in the sub-70 horsepower segment, and caters it through its assembly plants in Texas, California and Georgia. In China, it sells tractors under the Mahindra brand under two joint ventures with two leading state-owned tractor companies. M&M also plans to assemble tractors in Mali, Zambia, Uganda and Chad in Africa. TAFE, too, is getting into the act. Srinivasan won’t divulge much but clearly has big plans. “Await our next announcement,” she says.

Why TAFE chose Turkey over other markets
• A robust market for sub-100 HP tractors in which TAFE has considerable expertise and experience
• Void created by the closure of Uzel, one of the two major tractor makers in the country
• Manisa is a thriving industrial centre with a developed supplier and raw materials base
TweetYoutube

A hill station for work and play