Consumers clamour for rebates—all year round. 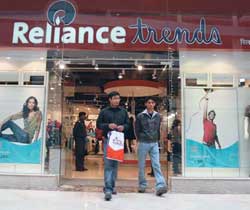 Consumers clamour for rebates all year round
You’ve heard plenty about the Indian middle class’ rising purchasing power and rising disposable income; yet when it comes to a discount, few are able to look a gift horse in the mouth—certainly not the ubiquitous price-sensitive, valuefor-money consumer. According to consultants McKinsey & Co., almost 40 per cent of branded apparel sales in India come from discounting. Retailers are focussing on this market aggressively, which is why there is a surge in retailers offering yearround discounts, ranging anywhere between 30 and 70 per cent.

Future Group’s 18-month-old value format called the ‘Brand Factory’ sells national and international fashion brands at 25-50 per cent discounts. The store has over 150 brands such as Arrow, Esprit, Van Heusen, Levi’s, Reebok, Lee, Pepe, Wrangler and Provogue. The group has six stores (ranging between 40,000 and 80,000 sq. ft) currently, and plans to expand to some 50 outlets by 2010. “Every brand needs to sell some of its stock on discount. It’s a global phenomenon and that’s why, in India, channels like Brand Factory have become viable for labels,” says Rajesh Seth, Vice President, Marketing, Brand Factory.

The Loot is a similar format that started with 10 brands three-and-a -half years ago. Today, it caters around 60 brands, in 30 stores in 13 cities. Managing Director Jay Gupta says he plans to scale up to 100 stores in 30 cities by next April. The Loot operates four formats, the smallest being 1,000 sq. ft and the largest 20,000 sq. ft. Gupta estimates the organised discount market to be close to Rs 11,880 crore.

“We will pump in Rs 100 crore this year for expansion. Our major focus is on medium and large format standalone stores because they help us in driving footfalls,” he says. On an average, the store gets 100 customers daily.

The Krishna Group’s The Grab Store is a more recent player in this market. The Grab Store is a chain of multi-branded discount stores that offer discounts as high as 80 per cent on menswear, women’s wear, kidswear, footwear and accessories. “We feel there is a huge gap in the market. Indian shoppers are intelligent and they are aware of the huge margins that brands have so they are forever looking for bargain shopping,” says Snigddha Kar, Head-Marketing for The Grab Store. The Mumbai-based Rs 400-crore textiles firm plans to invest Rs 100 crore on expanding its retail network to 50 stores by year-end. The store offers 40 international brands, including Nike, Adidas, Puma, Reebok, Pepe, Levi, Kaapa, Bossini and Mercedes, with discounts ranging from 25 per cent to 60 per cent.

Adopting a different approach is Reliance Trends, a part of Mukesh Ambani’s Reliance Retail. Instead of discounted apparels and accessories, the company has forged exclusive tie-ups with most of the brands for sub-brands. Thus, apart from the private labels, the store offers brands like Lee, Wrangler, Peter England, John Players, Blackberry, Liliput, Indigo Nation, Biba and designer labels like AND, Remanika, most of these exclusively for Reliance Trends. “There is a large opportunity in India for value clothing at affordable prices to consumers. Our target is the aspiring middle-class shopper who typically wants to wear branded apparel,” says Arun Sirdeshmukh, Chief Executive, Apparel & Luggage Business, Reliance Retail. The company plans to have a network of 100 stores in the next three years.

The Provogue Apparel Group introduced its multi-brand discount format ‘Promart’ in 2007. Arvind Brands is expanding the Mega Mart chain with plans to increase their number from 54 to 150 in five years. Brandhouse Retails, the brand-specific retail unit of apparel company S. Kumars Nationwide Ltd (SKNL), is also planning to enter multi-brand, large-format, discount outlets and expand its network of stores to 400 by year-end; and another three-fold by fiscal 2010.

Clearly, what isn’t at a discount is the excitement in this segment of retailing.