Last fortnight, global investment banking giant, Lehman Brothers, put out a report on India which, unsurprisingly, waxed eloquent about the economy’s long-term growth prospects, titled India: Everything to Play For.

Lehman Brothers is hot on the heels of the India story.

Last fortnight, global investment banking giant, Lehman Brothers, put out a report on India which, unsurprisingly, waxed eloquent about the economy’s long-term growth prospects. Titled India: Everything to Play For, the 173-page report concludes that India’s “recent growth upsurge” is no flash in the pan, but self-sustaining (although it does point out that such a pace of rapid growth is not “automatically guaranteed”). “With the right reforms, India could grow at 10 per cent for a decade,” screams the introduction to the report on the cover page.

So, if the Indian economy is in the fast lane, it’s only natural that Lehman should tailgate the fastmoving juggernaut. It isn’t the first Wall Street bank to be doing so; the likes of Goldman Sachs, CSFB, Merrill Lynch (after buying out its Indian partner) and Morgan Stanley (after opting out of a domestic joint venture). 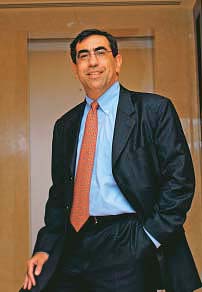 Lehman recently completed a year in India, a year in which it set up office in the upscale Ceejay House in Central Mumbai. From here, Lehman has flagged off full-fledged investment banking, securities trading and private equity practices.

“Our fundamental vision is that India is at an early stage of a structural growth story…we want to be a part of this growth process. We do not want to create a cottage industry. Rather, we want to create a full-scale robust platform in India wherein we are major participants in the financial market and the banking sector for many years to come,” says Tarun Jotwani, Chairman & CEO, Lehman Brothers India.

That Lehman is in a hurry in India is evident in its penchant for inorganic growth—in September 2007 the firm acquired the institutional broking business of BRICS Securities, which has since been integrated into Lehman Brothers India. “The acquisition has helped us accelerate our equity brokerage business plan by two years,” explains Jotwani.

Over the past year, Lehman Brothers India has been active on the fronts of advisory, initial public offerings (IPOs)—it was present in the high-profile Rs 9,000-crore DLF IPO —and foreign currency convertible bonds (FCCBs). It has also created a strong deal pipeline, with the sharpest focus being reserved for the infrastructure space.

Jotwani is impressed with the stock market’s heady rise, but he believes there’s still a long way to go. “For capital markets to flourish there needs to be (domestic) liquidity. Today, approximately 40 names account for two-thirds of the daily volume in the equity markets. There are over 5,000 listed companies, many of which don’t trade. Although the capital market is growing, the breadth is not there,” he says. The Lehman top brass also believes that the financial markets need to be further de-regulated, in the quest for double-digit economic growth. For instance, the corporate bond market needs to be developed, feels Lehman, to support a boom in investments.