The battle for control of Zandu is good for small shareholders.

In 1910, the Late Jugatram Vaidya Founded Zandu Pharmaceuticals Works in memory of his grandfather Zandu Bajji, a famous ayurvedic physician. Almost a century later, his great grandson sold the Vaidyas’ stake of 27.5 per cent in Zandu to rival Emami. Initially, this looked like just another change in ownership. It isn’t. Simply because Zandu has another promoter, the Parikh family, which owns 20.19 per cent of the company. The Parikhs are not too happy with the Vaidya’s sell-out to the Kolkataheadquartered company. Result? A corporate battle that’s showing no signs of ending.

Last fortnight, the Company Law Board (CLB) directed Zandu, which in a petition had alleged insider trading by Emami and its group companies, to go to the Securities and Exchange Board of India for investigations into alleged violations by Emami. The CLB, for its part, allowed the company to hold its annual general meeting (which was originally scheduled for August 9). 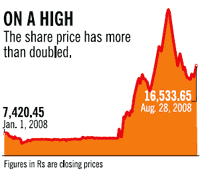 Zandu alleged at the CLB hearing that the Emami and its group companies had violated the takeover code, the Companies Act and had resorted to insider trading. “There has been insider trading (in Zandu shares) by Emami,” says Girish G. Parikh, Managing Director, Zandu Pharmaceuticals Works. Parikh’s main contention is that the Vaidyas sold their stake without informing the Parikhs. “I am sad they did it,” says Parikh.

So, who is better placed to control Zandu? Parikh says Zandu has a broad-based board, with five independent directors and two from the Parikh family. The Vaidyas are not on the board despite holding a stake that was higher than that of the Parikhs. The Parikhs, say market men, have been purchasing shares from the open market in a bid to shore up their stake.

Even as the tug of war continues, minority shareholders are making merry, what with the stock price having doubled over the last three months (see On a High)— after remaining static in the bull run of 2007.