Eye of the Asian Tiger

Blackstone Asia’s CIO is not unduly spooked by falling markets. Punita Kumar Sinha has seen it all—the bust-up in Indian stocks in the mid-90s, and of course the technology-led crash of 2000.

If you’re losing sleep over the current market volatility, you should meet Punita Kumar Sinha. The Senior Managing Director & Chief Investment Officer of Blackstone Asia Advisors, LLC, has seen it all—the bust-up in Indian stocks in the mid-90s, and of course the technology-led crash of 2000. An indicator that the current situation may not be as bad as it was eight years ago is that investors in her three offshore funds haven’t given her as many panic calls as they did during the tech wreck of 2000.

Sinha may not be unduly alarmed, but that doesn’t mean there haven’t been any surprises. The spike on inflation has been one. “We were cautious on valuations since September because of the way Indian stocks moved up. But we didn’t expect inflation to go up so sharply (at the time of writing the figure had inched up to 11.98 per cent). Moreover, we didn’t expect the US situation to get worse,” she says. 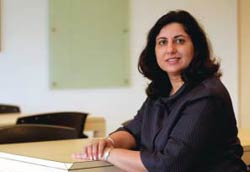 Blackstone’s Sinha: Believes it’s going to be a trader’s market
That’s why she has been underweight on India in two of her offshore funds—Asia Tigers Fund and the Indo-Asia long-biased hedge fund. In the Asia Tigers Fund, India weightage was down from 8 per cent earlier this year to 6 per cent in June; in the other, allocation to India was brought down below its mandated level. The Asia Tigers Fund lost 9 per cent in the year ended June 30, 2008. The third fund, an India-dedicated closedend fund, has reduced exposure to the financial and auto sector, and increased weightage to telecom and technology. This fund was down 10 per cent till June 30.

According to EPFR Global, a Boston-based company that tracks international fund flows, emerging market equity funds saw an outflow of $22 billion since the start of the year. So, is Sinha bearish on India? “It’s going to be a trader’s market. The valuation disparity between sectors is changing rapidly and you have to keep a close watch on them,” she says. With Indian markets clearly being influenced by global factors, Sinha is spending more time tracking global macro factors such as commodities and oil prices, and determining how India will get affected. “You have to see what is happening in the US.

The latest housing data shows that prices declined by 20 per cent. That kind of fall was seen during The Great Depression (of 1929). So the US is facing problems that are more significant than the previous cyclical downturns. This is going to impact the global economy.”

These concerns apart, as India overcame the political uncertainty in July, her funds have increased India allocation over the short term. But China and Hong Kong have a healthy weightage in the Asia Tigers Fund. Sinha’s rationale: China is in a better position than India to manage its inflation and currency. The Chinese economy may be slowing down but it’s still keeping a target of 8-9 per cent GDP growth; India’s economic growth on the other hand could slip below 7 per cent.

Is the red for real?