Aggressive posturing by Bharat Hotels and its top honcho is seeing it go places– both in India and overseas.

For someone who preferred staying in the shadows during her husband Lalit Suri’s stewardship of Bharat Hotels, Jyotsna Suri, Chairperson and Managing Director of the 3,600-room strong hospitality chain, is charting a whole new course for the group. 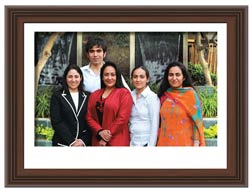 Jyotsna Suri, Chairperson and MD (second from left), with Deeksha, Keshav, Shradha and Divya
The broad parameters? That she’s in command and one among her children will be taking over the operational reins of the hotel group, pretty soon. Not that either of it was much in doubt after the sudden exit of former COO Farhat Jamal, who quit earlier this year after just over a year at the helm of affairs.

“I don’t need a COO as they can’t match up to my expectations. Besides, one of my children— Keshav, Deeksha or Divya—will become the COO,” asserts Suri. Currently, Keshav, 24, is GMCorporate, looking after brand management and marketing, Deeksha, 30, also GM-Corporate, takes care of HR while Divya, 35, is the group’s Legal Advisor. Shradha, 31, Suri’s fourth child, looks after the family’s non-hotel business Subros, which manufactures automotive air conditioning systems and Step By Step schools.

As for the reason Jamal left after a short stint, she alludes to the difference between an ownerdriven organisation and a professionally-run unit—Jamal had spent almost 30 years with the Taj Group of Hotels before he was roped in by Suri, who makes no bones about her aggression.

Her fierceness to get what she wants is probably what’s propelling the chain to aggressively peg its new brand—The LaLiT—across cities in India and abroad, involving an investment of Rs 1,200 crore.

“Yes, there was an element of sentimentalism in renaming our hotels after the founder but it also was the public face of the chain,” she admits. Of course, the latest brand name change comes after the hotel experimented with Holiday Inn, then Holiday Inn Crowne Plaza, then Hilton, then Intercontinental, and then The Grand, though she strongly denies that the chain was experimenting with its branding. “Our first branding was with Holiday Inn, which later on became Holiday Inn Crowne Plaza. However, we felt that while the Crowne Plaza signified the upscale nature of the hotel, the attachment of the Holiday Inn brand was detrimental to our image. Hilton, of course, was clearly a mistake from both ends and since we still needed the support of an international hotel brand, we tied up with Intercontinental,” defends Suri. The tieup with Intercontinental also ran into problems as they wanted management control of their key properties, says Suri. “Their whole attitude was quite patronising,” she discloses. Currently, the group sports the Intercontinental tag on its Mumbai and Goa properties, the contract for which expires in three years and doesn’t seem likely to be renewed.

Click here to Enlarge
Tourists can expect to see the new brand in Bekal in Kerala and Jaipur before the end of the year while Kolkata’s refurbished Great Eastern and the unit in Chandigarh will be opening next year. Overseas, the group is proceeding with its venture with the Nakheel Group for the Grand Fort Dubai, despite the slump in the city’s real estate and economic fortunes while simultaneously giving a facelift to the Resort and Spa Koh Samui in Thailand.

Money, quite obviously, is flowing in unhindered for Suri to indulge in her expansive ambitions, despite cancelling an initial public offering (IPO) following Suri’s demise in 2006. “I was not getting a fair value for our shares—instead of the Rs 400 per share (Book Value), we were told not to expect anything more than Rs 300-325 per share. Besides, at the time of filing our draft red herring prospectus (DRHP), we didn’t have any hotels coming up and our expansion was more underground than anything tangible,” she says by way of explanation for the cancellation of the IPO. The chain went in for a private placement, raising Rs 164 crore from Dubai Ventures. Of course, unsaid in all this is the fact that after her husband’s demise, the organisation’s longevity appeared in doubt as there was no clear leadership in place. “I want to get at least three more hotels operational before I plan for an IPO, which could be in 2011,” says Suri.

That, of course, would be a fair timeline to get a good premium on her shares, given that the current slowdown has made investors lose any appetite for IPOs. Additionally, the hotel sector has taken a beating, not least due to the 26/11 attacks in Mumbai. Expectedly, the hotel’s average room revenue (ARR) in 2008-09 will also take a knock like those of its competitors. Future plans include starting a chain of budget hotels, with the first three expected to roll out by end 2010.

Suri denies any slowdown in her expansion plans or relook at any of the upcoming properties. She does, however, admit to a bit of arm-twisting in the current scenario to cut down her costs, especially for the group’s upcoming properties. “I’m opening up every contract with each builder and architect and renegotiating on the rates to get better deals for the group. Or if not rates, then a renegotiation on the timelines for the completion of the projects,” avers Suri. That should ensure that if she can’t get a better deal, she at least gets a faster one.