The Vedanta group restructures to boost operating efficiencies. The exercise is an attempt to reduce cross holdings and pare costs. 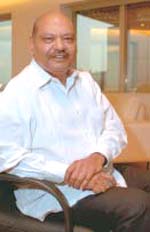 Vedanta’s Agarwal: The London-based tycoon is in consolidation mode
The Vedanta group is now gearing up for a complete overhaul of its corporate structure. The exercise is an attempt to reduce cross holdings and pare costs. The $7-billion group, controlled by the London-based tycoon, Anil Agarwal, is consolidating its mining and metal businesses under three different entities. Sterlite Industries (India) Ltd will hold all the copper, zinc and lead assets that are now scattered across the group.

Vedanta Resources’ 79.4 percent stake in Zambia’s Konkola Copper Mines Plc (KCM) will also be moved to Sterlite Industries. Sterlite’s equity holding in Bharat Aluminium Company Ltd (BALCO), Vedanta Aluminium (VAL) and Sterlite Energy Ltd (SEL) will be transferred to MALCO. The restructuring process is expected to be completed by March next year after getting the green signal from shareholders, stock exchanges, courts and regulators in India. However, the group’s initiative has left the stock markets unimpressed.

On the day of the announcement, Sterlite Industries shed almost 8 per cent on the BSE. Even on the London Stock Exchange, Vedanta Resources Plc, the holding company, has gradually lost ground. Clearly the market has concerns about the new look of the group. “In the wake of the downturn in the commodity cycle and inherent volatility of the copper business, the risk profile of Sterlite Industries is likely to go up,” says V. K. Sharma, Head of Research, Anagram Stock Broking. 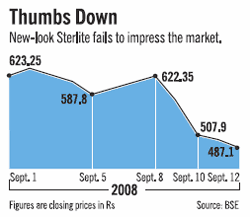 The other concern among investors is related to the transfer of Konkala mines to Sterlite Industries. “The key negative in the restructuring plan announced by Sterlite is the transfer of the Konkola copper assets from Vedanta Resources to Sterlite at a share swap ratio of 1:1,” says CLSA in a restructuring note on the group. According to CLSA, the exchange ratio is expensive on the basis of the earnings potential of Konkala assets over financial year 2009-10 and sees a 15 per cent drop in its sum-of-the-parts fair value for Sterlite. Other than the transfer of businesses, there is equity dilution of more than 50 per cent in Sterlite Industries to contend with.

The restructuring (considering issue of fresh shares on transfer of various businesses) will lead to lower earning per share (EPS) in the short term. The concerns notwithstanding, part of the reason for the thumbs down by the stock markets, some analysts feel, is the general indifferent sentiment on metals stocks as a whole. So, will the move pay off for Vedanta in the long run? The group claims the restructuring will help it rank among the world’s five largest aluminium producers by 2012 and become one of the top 10 producers of iron ore.